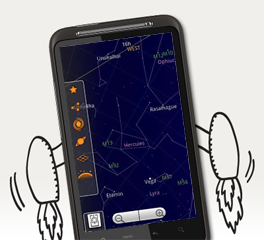 Have you always wanted to know the constellations? Are you interested in where you can find Mars but can you only find the sun and the moon in the sky? Do you never want to miss out on a meteor shower again? Do you have a telescope and want some help with aligning? Do you have an Android phone? Then the answer is here: astronomy apps! Apps like Google Sky Map, SkEye, Space Junk, Moon 3D and Meteor Shower will help you searching the sky for interesting objects and learning more about them.

Google Sky Map is an interactive map app that uses your location (tracked by GPS, WiFi), the phone’s accelerometer/compass and the day and time to show you space objects in the direction you are pointing your smartphone. When rotating your phone, the map moves accordingly. In the video below, software engineer Kevin Serafini from Google explains how Google Sky Map works.

With Sky Map, it is possible to see stars, constellations, Messier-objects, planets, meteor showers and the horizon and to toggle on and off the display of each object. It also tells you which way you are facing in terms of West and North, and the 3D circular grid makes for better orientation. The search mode is a very nice feature for all kinds of purposes. Searching for an object, a big circle with an arrow appears on the screen, pointing toward the object. When the highlighted object is in the circle, you know you have found it. You can toggle night mode, which turns the objects a faint red and the screen black, making it easier to focus your eyes back and forth from the screen to the sky. This app has really been thought through.

So far I have only been able to test this app in cloudy weather (Holland in fall…), but I will update this post when I get a chance to – when the clouds leave the field, that is. I have found that it runs very smoothly on my phone and that it is actually very accurate in moving the same direction as I was. Luckily, it had no problem pointing out the sun to me, the most visible object to the naked eye (together with the moon), meaning that the alignment is working. Unfortunately this app will drain your battery pretty fast, so when using it for a field trip, I would recommend synchronizing your location once and turning off GPS after that. There is one downside to it, which is that it provides no additional information on the objects you are viewing.

Additional Space Information
Luckily, the Android app market has more to offer! Meteor Shower Calendar shows you what meteor showers can be seen now and in the nearby future. It has very nice references to the web, to search information on the meteor and even weather information. When using it, unlike Google Sky Map, it warned me that I was in an ‘exremely strange magnetic field’ and showed me some tips how to improve my experience, such as moving away from iron, steel and electric equipment and calibrating the phone by waving in a figure 8 motion. It  runs on the Google Sky Map (SkEye) engine, so this mash up is designed to add information about meteors to the Google platform. Perhaps Google intended to leave out additional information so that app developers would get a more open platform to use, just like with Google Maps.

Apps such as SkEye and Space Junk are based on the same principle as Google Sky Map. SkEye also runs on the Sky Map engine. It profilates itself as an alignment tool for telescope equipment and added detailed locative information at the top of the screen. Space Junk built its own engine, shows you satellites and has a Facebook plugin. It displays only the names of big constellations and planets by default and allows tapping on objects for their names. Again, I will have to test all these apps in clear skies to be able to report back on accuracy and usability of the different systems.

Moon phase apps are widely available, such as Moon 3D and Moon Phase. They show you the current phase of the moon and help you find out when the next full or new moon is. Moon 3D additionally lets you zoom in on the moon and rotate it in 3D in the phase you viewed it in. This will help you locate craters and the like and shows you which side of the moon is not visible darker.

All of the above applications are (currently) free to use for Android phones. For detailed information and intense usage however, amateur astronomers might want to consider buying Mobile Observatory Pro. It really gives an in-depth experience of looking into space. This is the first app I bought ever, but the 2,99 was worth it. The options are endless and the additional information provided will keep even the most advanced amateur astronomers satisfied. Which is at the same time its pitfall. Users need some expertise on the field to be able to fully understand this application, as there is some jargon language. Thus, I would recommend app to people with knowledge of astronomy – or to very ambitious beginners who learn by practice.

As I am sure, all of these apps will guide practicing (amateur) astronomers and could encourage people with a pre-existing interest in astronomy to start developing that interest into a possible hobby. Furthermore, the apps made me feel quite small and powerful at the same time. It’s intriguing to point your small mobile device at the sky and get an impression of objects in space. It comes to show, the possibilities of digital media are infinite. Like space.

Update 26-10-2011: Apps to the Test
I got the chance to test the three “live map mode” apps: Google Skymap, SkEye and Mobile Observatory. All three I liked, and all three pointed out to me that the bright dot I directed my smartphone at was in fact Jupiter. The night mode in all three apps as a means to not lose my night vision was very useful indeed, where it not for the fact that I had to switch between the three apps through my home screen. For this fact I recommend using only one app at a time. So, which app should that be? Google Skymap is very basic, but does what it says, which is enough for users who don’t want to pay for their apps. SkEye was fine as well, quite similar to Google Skymap. But if you are willing to pay 2,99 on a most intensive and complete guide, the Mobile Observatory app is what you are looking for. Whereas Google Skymap and SkEye don’t provide extra information, Mobile Observatory gives you all the information you need (and more). This app will satisfy both advanced (amateur) astronomers and beginners. Beginners like me benefit most from the live map in discovering constellations and stars and then finding out more information about them, advanced users can rely on the calender and visibility charts.

All in all, I recommend all apps. Google Skymap and SkEye are good for free, basic sky search. Mobile Observatory costs a couple of Euro’s, but will provide the user with that much more information. You almost wouldn’t know where to start your sky searching adventure! Well, here’s a start: download Google Skymap and take it out at night. If you have no further desire to know more about the exact visibility or the star itself or if you have other information sources for that, you are done there. But if you want to know more on the spot and want to have an excellent astronomer guide accompany you on your phone, Mobile Observatory is the way to go.

Picture: mash up by me.