New Media and the Syrian uprisings: one student’s perspective. 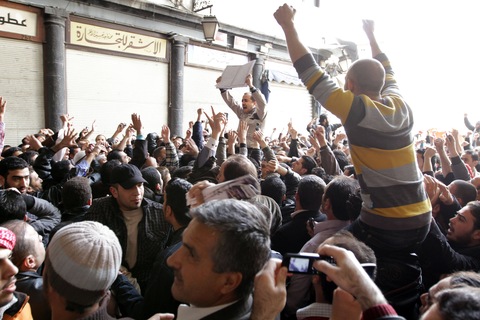 Edward Said wrote in his book Covering Islam that historically the western mass media have exercised the power of representation over the (in this case) Islamic ‘other’ and suppresses the possible multiplicity of 800 000 000 global Islamic citizens into a few reductive stereotypes (1981). Said argues that voices are mediated and distorted through the western mass media who claim the power of representation.

Is there a possibility that with the rise in the global uptake of social media platforms that Said’s claim can be discredited to some extent? Indeed, over the past two years the voice of the ‘Other’ has become more accessible through social media platforms such as You Tube and Twitter. Indeed, James Jay Carafano underlines the impact and importance of street journalism and the Internet in the shaping of the 2009 Iranian uprisings. I feel this shift  is neatly expressed through Henry Giroux’s statement of how he believes the mass media spoke of social networking before the uprisings in Iran two years:

‘the new communications technology and the diverse social networking sites associated with it are generally represented in the dominant media in terms that are utterly depoliticizing and privatizing, and reduced to personal tools and entertainment devices that allegedly enamour young people all over the world’ (2009)

In the wake of the events that have taken place from Tripoli to Tehran since 2009, this claim now sounds both naive and extremely dated. Newspapers and dominant media sources have lauded the political role that social media has played in the Middle Eastern and north African uprisings. Indeed, the Guardian’s Evgeny Morozov talks the the integral role online social platforms have played in the ‘real’ world of political mobilisation, a view undoubtedly shared amongst global media thought. Furthermore, Damascan based journalist Nidaa Hassan even spoke of how social networking has helped a towns defend themselves from the wrath of the regime. In understanding the implications of social media being used, it is also important to consider the ways in which the Syrian government have used online platforms to identify and further suppress their citizens.

There has clearly been a politicising of social media practice around the world in the discourse of the dominant media sources and the implications of this are vast. There is a clear shift away from Said’s paradigm that the mass media have the power of definition over the ‘other’ in public discourse. Tweets from the streets of Damascus appear on national newspaper’s online home pages, You Tube videos are uploaded from protests and shown on live 24 hour international news channels and anonymous middle eastern bloggers are quoted in newspapers. While I am not claiming for a moment that a utopian world of free and open global free speech and power has arisen, indeed there is a hegemonic western capitalist discourse underwriting a lot of discourse in the uprisings, but there has been a clear shift in the way the voice of the ‘Other’ exists in mass media reporting over the last two years and the Internet and social networking has played a central role in this.

I wish to explore this further over the coming months, with a focus on Syria, and have the intention of this research culminating in a thesis on the subject. I feel that to be able to explore this topic with any authority it would be important to start to talk to people who live in the  countries effected. To begin I wanted to interview a young active Syrian about the perception of social media in Syria and how it is actually being used. I felt it would offer, amongst other topics, an initial insight into what citizens see as the motivations behind the uprisings. I tracked down a 21 year old student from the University of Damascus willing to answer my questions. Understandably, she wishes to stay anonymous.

I am from Damascus, Syria and am a student at Damascus University. I study English literature.

J: What are your thoughts on the uprisings that have taken place in Syria?

In my view, during this past six months, Syria has been witnessing a big wave of public movements that was essentially influenced by the revolutions that took place in booth Tunisia and Egypt. Those movements, in my opinion, are a natural aspiration towards freedom in every aspect of the word, equality, better economical plans, and an expected result of years and years of repression. But to call it a revolution that would be not quite accurate because these movements have not won the majority of the people in Syria whom until now still divided between supporters for the government and the regime or for the anti-parties.

J: What, if anything, was your association with the uprisings?

I didn’t participate in any of the demonstrations; first of all because these demonstrations are held only in some parts of Damascus and mostly the outskirts of the city (except AL MYDAN maybe)and they are not easy to get to on Fridays without getting checked and asked by policemen and many times even forbidden to enter, meanwhile the part that I live in is quite calm like most of Damascus, and second that most of these demonstrations are coming out of mosques after Friday’s prayer and I don’t personally trust people who go under the cover of religion to achieve any goal even if it is Freedom. But all the time I try with my friends to get people to understand what is really happening and to bridge the gap between the supporters and the against so we don’t lose the chance of having a real democracy if we trusted the right people. And that is done by talking face to face (and of course one by one) to spread the message.

J: How do you use social networking and new media?

I mostly use Facebook as the easiest tool to stay connected with everything from events to news and to have a clear idea of anything that happens not only in Syria but also the world, but the mobile phone is just for family and friends nothing else.

J: Has social networking changed the landscape of Syrian politics?

Of course, these technologies have only started to become popular (and by popular I mean widespread and accessible) since president Bashar Al Assad came to the authority leading what was  called then (The process of development and modernization) before that there were a lot of restrictions and limited access to such technologies.  But that was not enough and this process was not carried on long because after that, true, the internet was everywhere, but a lot of websites were blocked by the government such as Facebook and YouTube which needed special proxy servers to access them, and just at the begging of the demonstrations and the call for a freer information access, the government unblocked these websites as a sign for what they call “the will to reform”. Nevertheless every once and a while these websites becomes so hard to open without a proxy, and even the whole network sometimes becomes too slow and week especially on Fridays, and this is a waste of time and money and it only make people madder.

J: How important have particular online social sites been in the uprisings?

Facebook has been very important in these movements. A lot of pages were created to deliver what they call truth. You have pages for informing people where the demonstrations are taking place, the numbers of participations, numbers of victims, missing people, arrested people, and even which celebrity is participating and which is not. On the other hand, there are pages that were created by people who supports the government and believe its truth. These pages also tell you about the dates when movements to supports the government plans would took place, the numbers of victims from the police and army and civilians, and delivering also what they think are threads of the big scheme against Syria. You need to check these pages all the time to know what is happening around you and how the truth is played and delivered from each side. Meanwhile concerning mobile phones, they are used through these movements as mere cameras to record and tape the demonstrations so that they could post the videos on Facebook or YouTube to get their voices heard.

J: How vital were these sites for the uprisings?

I think that these technologies have had a good part and a bad one in the uprising. The good part was that people were more connected, better informed and had a chance each one to say his or her opinion in the happenings. Only the bad part of it that it started to be too much chaotic; anyone can post a photo and create a story and sometimes people would get carried away with emotions but after a while they discover it to be only a made up picture with a made up narrative. Sometimes you’ll have pages and pictures and videos of false demonstrations that are shot and directed thoroughly to create a false impact that this happened in this city or these people were killed in one way or another that also somehow after a while another video would complete the first one and make you realize that it was all acting. These kind of false stories that all the foreign media would be buying and the Syrian one would be making fun of had made a lot of people lose their trust in these movements. But I can’t think that we can manage not having these technologies involved in such movements because then we would be missing a lot.

J: Would have the uprising have happened without the online platforms?

I don’t think that these technologies are what allowing everything to happen and guiding people because the movements first started in the streets not online and it was not planned. These technologies came as a good aid, maybe an important one, we need it but it’s not essential.

J: How do you feel about the future of Syria?

I think that the future of Syria is definitely going to be better and freer. The people of Syria, and I think that this includes everyone, whether they are with the demonstrations or even supporters for the government, they all get that we must move forward with our country, and anyone who will show a real intent to improve the country without deviating from what we -Syrians- hold on to as principles, is welcome to prove his or her intent.

Finally, I want everyone in the world to examine what is happening in Syria closely, and to have the benefit of a doubt in everything that is being shown to the outer world as taking place in Syria, because believe me or not, the scene from the inside differs too much from what is delivered as the truth. Peace from Syria to Syria and to you all.

Giroux, Henry (2009) ‘The Iranian Uprisings and the Challenge of the New Media: Rethinking the Politics of Representation’ in Fast Capitalism, 5.2 (http://www.uta.edu/huma/agger/fastcapitalism/5_2/Giroux5_2.html#_edn1)