This is an interview with blogger Vali Petcu, more known on the Romanian market as Zoso. In Romania, Zoso is considered one of the “A-list bloggers” and has been writing the most read blog for the last six years. New Media passionate, he has been involved in developing some of the early Romanian forums and websites. Although bloggers are frowned upon and are engaged in a constant fight with old-fashioned journalists, some are still very successful. Zoso is such an example and has agreed to share, here, his blogging experience and opinion on several aspects regarding social media and advertising issues in Romania. Considering his tight schedule, this interview was taken via email.

You are an icon in Romania and quite controversial, if I may say so. With the risk of copying the already famous video, I Am the Media, do you ever Google yourself? Why?
I do not Google myself very often. I have some alerts set up, so when someone mentions my name I am notified. I check what is on the first page on Google in order to make sure there are not too many bad articles about me, even though there are a lot.

When did you become interested in blogging and why?
I am a failed journalist. I was disgusted by the term in 2002, after working in the press for three years, but I still loved to write. So, in 2005, I stumbled upon some blogs, supermagnet.ro and unapezi.ro, and realized I could do that as well. At first, I was just ranting about stuff and posting links and news, but later I became serious and started writing long pieces and analysis about what was going on in Romania and abroad. My articles about the Romanian internet and social events such as the credit crisis, personal health and personal development started attracting more audience than my regular 300 readers.

Is blogging profitable in Romania? Do you currently have another job?
For me it is, but I am one of the few who make money from it. 99% of the blogs out there do not make any money, because they lack in traffic and knowledge.
I quit my job in 2008 to focus my whole attention on my blog and I think I made the right move.

At the moment, your blog, zoso.ro, is the most read in Romania. What is the secret behind your success?
I am very dedicated to it, working day and night to keep it updated. The blog is a well-oiled machine: it has a simple, but catchy, design, it is easy to read and it covers a wide range of subjects. Most important of all, it filters out the useless content from the newspapers. I think blogs came out on the scene when the news outlets were just beginning to understand what was going on with the Internet and caught the attention of a lot of people by being simple and honest.

You won several awards at RoBlogFest for two years in a row – 2006 and 2007 – after only starting your blog in 2005. Why did you stop participating?
Well, after the second year, I wanted to let others win. Once you have such a huge traffic, it is obvious you will keep on winning, because more people will vote for you. And that is not fair or all right. My interest, at that moment, was to grow the blogosphere. Even though I am still the popular blogger, others rose to the challenge, because they saw the guy whom they could not beat before step down.

What are the common mistakes that bloggers usually make? Would you mind giving them some pointers?
I have written quite a few times about them and there is even a tag on my blog called “blogmistakes”. Yet most of them do not tend to listen, giving the fact that not so many people think my experience is any good. I do not have a friendly personality, which means other bloggers want my fame, but do not want to listen to my advice. Those who did listen, for example arhiblog.ro, visurat.ro, among others, are now well-known bloggers in Romania.
The most common mistake is that they do not have an opinion, because they do not know a lot. So they either reblog my opinion or translate articles from TechCrunch or other media outlets.

Do you have a Google+ account? If you do not have one, would you consider getting one? What is your opinion about Google+, in comparison with other platforms such as Facebook, MySpace, and HI5, only to name a few?
I have one, since Google forced us to do so. I cannot go into details on this one, but it is true. However, I think it will fail as badly as the other Google products have, except for Gmail and AdWords. It is not a fun place to be: there is a lot of spam and there are no tools for following other people’s updates, plus many more.

I read a short time ago that a bank from Romania (BCR) launched a smartphone platform for clients to pay bills and a radio station (Radio ZU) developed a customized application to listen to them on a smartphone. Would you, personally, use these applications? Why?
Well, I am a client of another bank, so no. Regarding the radio app, sorry, Radio ZU has a cheap audience, so I do not think many people use that app. Not to mention that, at the same time, Radio ZU has some image problems; the two DJ’s doing the morning show usually steal their information from bloggers. 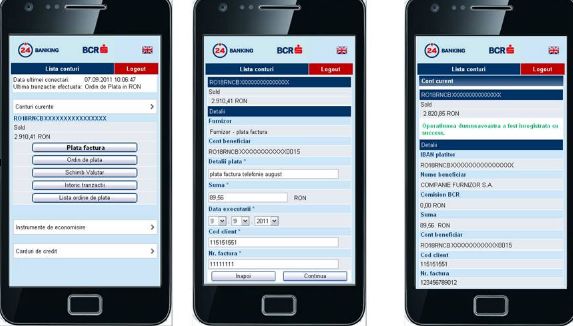 Is blogging a good advertising medium? What do you think about social media sponsorship of, for example, tweets or paid blog posts?
I make my money from that, so yes, I would say it is. I do not know about social media. The use of Twitter is very low in Romania, but blogs are doing well. They are cheap and give results, usually more than the client has paid for.