Hey Jimmy Wales, Nobody Cares About your Life in the Spanish Wikipedia

What happens when you knock on the ‘door’ of the Wikipedia founder? Apparently nothing, if you are Spanish language speaker. Compelled to create an article for ‘the mother of all wikis’, I assumed that writing about some hobby or trivial subject was not enough for me, so I decided to ask myself this question.

The next step in order to get an answer was thinking of a plan. After a quick search in Wikipedia I discovered that there was no Spanish article for the Californian ideology –the English version is also a stub, but this is another story. The set of beliefs that inspired the digital entrepreneurs of the dot com bubble back in the 90s was a perfect subject for two reasons. I could write about something related to new media and at the same time give my ‘Jimmy Wales experiment’ a chance.

I used the original text of the English version (a single paragraph) and made it longer, using references from the essay The Californian Ideology written in 1995 by Richard Barbrook and Andy Cameron. I also established a last relationship between Ayn Rand’s Objectivism and this “mix of cybernetics, free market economics, and counter-culture libertarianism”, as defined by Barbrook and Cameron. The first part of All Watched Over by Machines of Loving Grace, a recent documentary by British filmmaker Adam Curtis, served here both as an inspiration and as a reference for the Wikipedia article, accessible here.

This is the English translation of these last paragraphs:

In his 2011 documentary All Watched Over by Machines of Loving Grace, British filmmaker Adam Curtis establishes a relationship between the Californian Ideology and the Objectivist philosophy of Ayn Rand. According to her view, “human beings are alone in the universe and they must free themselves of all forms of political and religious control, and live their lives guided only by their selfish desires. If they did this, they would become heroic figures”.

According to Curtis, Rand’s ideas were an influence for the generation of new entrepreneurs in Silicon Valley during the decade of 1990, like Oracle’s Larry Ellison. Jimmy Wales, founder of Wikipedia, has also declared that he read Rand’s books during his college hears and that some of the values of her work, like the pursuit of independence, are applicable to his own life. 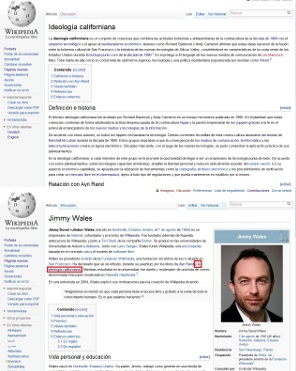 I made two conscious decisions about citations in order to generate controversy. The first one was that I would not include a link to the 2005 interview where Wales declares his youth passion about Rand, because I wanted some user to ask me for it. I also preferred to use a reference from popular culture (a documentary produced by the BBC) instead of an academic one, despite the fact that the influence of Ayn Rand’s work in Jimmy Wales’ philosophy -and the very own inspiration behind Wikipedia- has been established by several authors. In her essay “A Journey from Rough Consensus to Political Creativity”, Johanna Niesyto refers to this previous academic literature when she explains that the neutral point of view of Wikipedia is a principle that “has been interpreted as translating Ayn Rand’s school of thought and other libertarian influences”.

The time to knock on Jimmy Wales’ doors came once the relationship between the Californian ideology, Ayn Rand and Jimmy Wales had been established by my Wikipedia article. How would I ‘knock on his door’? By editing the article about him in Wikipedia and including a reference and a link to the Californian Ideology. The English translation of the previous text about Wales and the sentence I added (you will find my edition in brackets) is as follows:

He has declared that he was influenced by Ayn Rand’s books [and the Californian Ideology] during his youth. He was the owner and moderator of a mailing list called Moderated discussion on Objectivist Philosophy.

I decided to include the reference to the Californian ideology in the article about Jimmy Wales not only because I thought that it was relevant, but also to wait and see the feedback from the other users. Would they consider that my edition was lacking any specific references or citations, or that the ones that I gave, like the documentary, were not encyclopedic enough? “Maybe somebody will start a discussion in the Californian Ideology article, or even in the Jimmy Wales one,” I thought, because some members already talked about this controversial relation some years ago. Instead of all that hassle, the only answer I received was silence. Not even bots took care of Jimbo Wales.

There is another plausible reason for this indifference. As this is solely a speculation, it is not my intention to establish a causal relationship, only to indicate an historical context. This background includes the forking of the Spanish Wikipedia that happened back in 2001. As Nathaniel Tzack explains in the essay “The Politic of Forking Paths”, forking “refers to splitting a project to create two separate entities”.

Whether this indifference about Jimmy Wales is just a coincidence, or rather part of the historical differences between the community of Spanish-speaking users and the Wikipedia elite, is something that cannot be decided at this moment. Nevertheless, it indicates some errors in the management system of this encyclopedia, because nobody seems to care about the accuracy of citations.