Bram van Montfoort (’87) is an online man. He once started with a dial-up internet connection and egg timer to keep track of ‘online’-time, nowadays Bram is equipped with iPad, PC and mobile phone and can be followed on Twitter, Facebook, LinkedIn, YouTube and Vimeo. All that is about to change however: Bram van Montfoord is going offline for the entire 2012-year: no mobile phone, no internet. An interview with a soon-to-be disconnected man.


How did you come up with this idea?

I’m amazed by how terribly fast everything is going. Facebook and Twitter are incredibly new and still I can’t even imagine life without them anymore. I wanted to do something with that. I believe in a radical approach and I’m a fan of participatory journalism. So, in the same fashion as Günter Walraff examined how life as a Turk in Germany was and Morgan Spurlock examined the influence of a McDonald’s diet on your health, I want to see how life without Internet and mobile phone for someone in their twenties looks like nowadays.
What’s the most important reason you’re doing this? What do you want to accomplish with this project?

I’m mostly curious about the social aspect. How did Internet and mobile communication affected the way we relate to each other? With this I mean the relationship with strangers, companies, government as well as friends and relatives. By examining this closely I will be able to, at least for myself, say something meaningful about this. Hopefully the book that I will write about my experiences will prove food for thought for others.
Why have you chosen for the period of a year?

If I were to do this a week or month it would resemble a holiday too much. I would be able to plan around it: ‘I’ll do this or that next month when I’ll have internet’. Within a year I will encounter the fact that I’m offline in all aspects of my life: study, work, doing an internship, looking for room, traveling etc. – aside from all my personal relations with friends, family and love of course. One year therefore seemed to me to be the ideal period to do my research on life offline. Aside from that it kind off sounds nice, ‘a year offline’, plus this research hasn’t been constructed this way.
What’s allowed during this year and what isn’t?

I’m not allowed to use the internet or mobile phone. I can use a computer and a private (house-bound) phone line. With this private phone line I am allowed to call people on their mobile phones. I can’t however ask people to use their internet or mobile phone for my own purposes. There are two exceptions to this rule. Firstly, Nieuwspost.nl will post the letters and videos I send them online. Secondly, I may ask other people to change my private phone line in case I will swap houses.
Do you currently consider social media and your mobile phone as an enrichment in your live in the sense that you are really happier because of these technologies?

I really wouldn’t know. I’m happy with the freedom it provides. I’m able to reach everyone everywhere at the very last moment and I can draw from a large pool of people to hang out or ask advice. On the other hand I sometimes wonder what these people actually mean to me.
Do you think that the absence of the Internet and your mobile phone in your daily life will mean you will have to miss these pleasures and thus will be unhappier? Or do you think the project, since you won’t have the need to be constantly active online, will lead you to a more balanced and happier life?

That’s one of the aspects I’m really curious about. I might end up in isolation because I’m the only one in my environment that will be living offline. It’s also possible that the Internet and the mobile phone turn out to be less important for my well-being as I might expect. 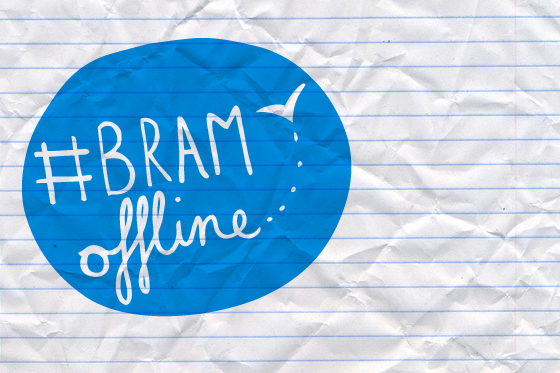 What will you miss most being offline?

Information. I’m curious by nature and thanks to Google, Facebook and Wikipedia I’m able to look up information in no-time. I’m connected with the entire world and it is this feeling that I’ll probably miss the most. The fact that everything is suddenly becoming so small and local.
A lot of content on television and even newspapers nowadays comprise of information and opinions found on the Internet (think of tweets in television news). To what degree do you think you will be able to really go offline by only excluding the Internet?

That information is selected however and I can’t react on it directly. This applies not only to media but also in my relations with other people that are online. The Internet will remain around me all the time, it’s just something that I won’t participate in anymore.
What will be the main topic of the book you want to write? Will this book be critical against our modern day online society or will it serve more as the description of a ‘funny’ experiment?

I want to provide an honest and personal report of life without Internet and mobile phone. In the book I will describe what I experience and in what way this differs from previous experiences when I was still online. As far as I’m concerned it’s more than just a funny experiment since the project can actually say something about the way we interact with each other. I am however cautious about drawing (too much) conclusions since I don’t consider myself an expert in this field and because I like the opportunity for people to develop their own opinions and ideas. My book can be of help with that and serve as inspiration. I will ask a couple of experts to follow me during the year: a sociologist, a psychologist and an addiction expert. These experts will report on my experiences from their own perspectives. I’ll probably use a selection of these viewpoints in my book, although I haven’t decided yet.
You will post your findings and experiences on Nieuwspost.nl through a (scanned) letter. This is, as you point out, the only exception to being offline, i.e. not using the internet indirectly. How do you expect to generate publicity without the internet?

It’s going pretty good actually. Within a week I’ve been contacted by the by newspaper het Parool, and local television channels AT5 and RTVUtrecht. Aside from that there are links to my video on the sites of newspapers Trouw, Algemeen Dagblad and de Volkskrant. Dutch television network BNN will start a new program about internet in the near future and showed interest in my project. Both AT5and Thuiswinkel.org have showed interest as well. I’m currently still on the lookout for a news paper or magazine that will publish my experiences. 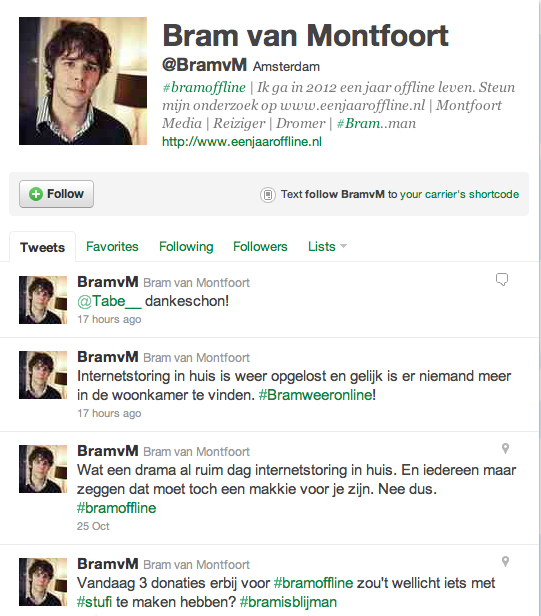 In your project plan you’re referring to the early nineties, the ‘stone age’ when people weren’t online and constantly available yet, and you wonder how it will be like to live in that time. Don’t you think however that, because everyone’s online now, you will find yourself in a far more isolated position?

That’s certainly possible. I’ve just read an article in which a professor is stating that the divide between people that have access and people that don’t will get larger over time. This is of course the interesting aspect of the project. A lot of publications on this subject make comparisons with earlier situations, my research will focus on how it is to live offline now and see if it’s even possible.

You claim to have around 300 LinkedIn contacts, 500 Facebook friends and 300 Twitter followers. Do you think you’re social network will shrink after your offline year? Which of these networks do you think will shrink the most? And would you consider this a loss?

I’m not sure. I don’t even know if my accounts will still exist by then. Will people delete me because you’re no longer active on the network? Or will people add me to the network as a joke? I personally think it’s rather funny to talk to a person on twitter whom you know can’t reply. If it were the case that my networks would have severely shrunk in 2013, or even been deleted, I would surely consider this a loss. My Facebook contacts won’t be too hard to befriend again, on LinkedIn however this would be harder I guess.

You want to raise € 5000,- for the project, mainly to cover for financial damage due to possible delay of your study, missed income from your company, costs of writing letters and the launching event for your book in early 2013. Will you go through with the project if you don’t raise € 5000 ,-? What’s the minimal amount with which you’ll continue the project?

That isn’t entirely correct. I actually want to raise around € 10.000,- for the project. I hope to raise half of that amount via crowdfunding. Through crowdfunding I’m able to engage people with the project at an early stage. One group knows more than one person and I  want to use that knowledge to guide me in my project. Aside from that crowdfunding enables me to make bigger and independent publications than is the case in traditional media, where there’s often less freedom and there are more strict rules. I want to raise the remaining € 5.000,- through publications in traditional media. I think this is a good interaction: on the one hand I’m able to extensively inform people that are especially interested in the project, on the other hand I can reach a large audience through traditional media. I will go through with this project in any case. If there is no or very limited funding it will be hard to publish about it however. Only € 1.000,- of the € 5.000,- is reserved for possible delay of my study and missed income. It think that the actual financial cost of the project will be a lot higher (a half year study delay costs around € 2.250,- and I expect to miss around 10 assignments for my company valued at € 3.000 – € 4.000,- per assignment).  Most of the money will go to the costs of postal stamps on the letters I will send to my followers and the costs of getting my book published. I contacted PostNL about sponsoring the project. With that sponsoring I can adjust my budget and be able to reach a lot more people with my letters.

Why would people sponsor you? The project is your own choice after all.
Because they think it’s interesting. You might buy a Volkskrant or Vrij Nederland because it has an interesting article on internet use. Those articles are often a few hundred words long and are written in a day or maybe a week. My research will last a year and you’re able to follow me on a weekly basis by letters and videos. Furthermore people can influence the project by writing me back and even give me assignments.

What will be the first thing you’ll do when, on January the 1st 2013, you’re online again?
Google myself.