This post is a summary of the presentation held on October 20 during the final session of the New Media Practices course 2011, with some additional information about the artistic and practical background of the booth. The Facebooth is a photo booth shaped box containing physical mirror showing your digital self. The booth can be placed anywhere, and anybody who has a Facebook account (or who has access to one) can use it without any instructions on beforehand.

The Facebooth looks like a normal photo booth. The same size, the same principle – just a box with a mirror inside, and an instruction screen telling you what to do. But instead of the normal photo booth instructions (a strip or a large picture, black and white or full colour, etc.), the touch screen shows you a Facebook login window. Once you log in, a next window appears, asking you to confirm a Facebook app that will use certain data from your profile – wall posts, photos, and photos you are tagged in. As soon as you confirm, you turn into a user of the booth – the door curtain will automatically close, and a next window appears on the touch screen. 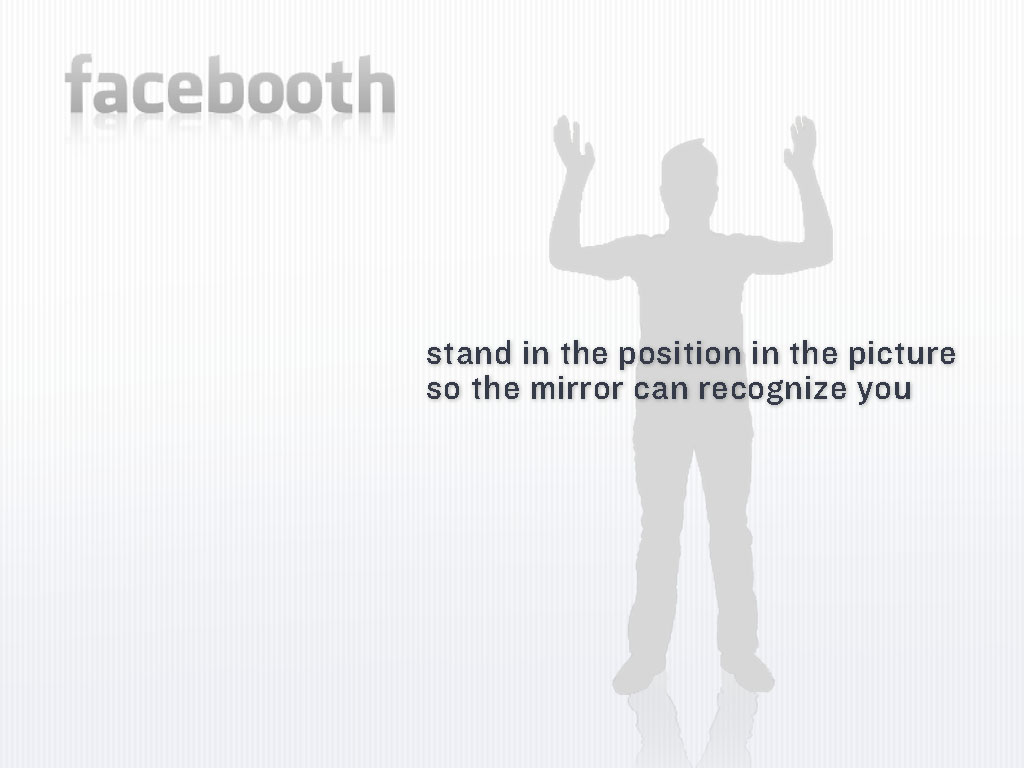 The screen shows the first of a short series of instruction windows. The first window tells you to go and stand in front of the mirror, and move your hands up (like on the picture on the right) – the Xbox Kinect, built into the mirror, recognizes the pose, and the mirror is turned into an interactive mirror. The mirror – actually a screen with a transparant reflective layer on top – shows three columns of icons. These icons are either photos or wall posts, taken from your Facebook profile. The touch screen now shows an instruction screen telling you that you can scroll through the content of the columns by moving your right hand up and down. This way, you can play around for a while, scrolling through the stuff the Facebooth took from your Facebook profile.

At a certain point, however, your time is up. A countdown clock column appears in a bottom corner of the mirror, also filling all of the touch screen, guiding you through the last seconds you have left in the Facebooth. Once the clock hits zero, a camera, also built into the mirror, shoots a photo. The Facebooth then posts the photo on your Facebook profile.

By displaying Facebook data on a physical mirror, the Facebooth shows an online reflection of the user through his/her physical reflection. Hopefully, this will lead to some sort of a shock effect. First of all, speaking in terms of identity construction, the user sees a virtual and an physical reflection of him/herself on the same screen (the mirror). These are both only reflections, the only difference is that we see our physical reflexion more often in every day life (at least in that format). Still, they are not the same. Can we call one of the two the ‘actual’ or ‘real’ reflection? Which reflection feels more like the proper reflection, the online or the offline? Does the user actively construct an online identity using Facebook, or is it merely a tool to get in touch with people? Is the online identity a mere reflection of some identity carefully conserved in the physical human body of the user, or would a piece of the user die if Facebook would crash? Some of these questions may seem a little far-fetched, but something like the Facebooth might activate some awareness on the subject.

A second topic that might strike the user when playing around through his/her data is the ease with which the Facebooth collected them. All that was needed was logging into your Facebook account and clicking on one or two buttons. That might raise some questions. How much of the time do I spend logged into Facebook? How many times per week do I click on some ‘confirm’-button without even looking what it’s all about? How many people gain access to my data, and how many people gain access to those people’s data collections? Of course, a transparent privacy policy is not the thing Facebook is known for, but still, seeing that those crazy party photos from four years ago are still online might trigger some awareness.

Using the Facebook API, the Xbox Kinect controller, Quartz Composer, a touch screen, an LCD screen and a booth to build it all into, the Facebooth can hold up a mirror to any Facebook showing his or her online and offline reflections simultaneously through a single screen. The users can be stunned, shocked, intriged, bored, or simply amused by playing around with (part of) their online identity. This video will show you some animations about the looks of the booth, as well as some touch screen screenshots and parts of the presentation: