The Knight’s Move: Mark Shepard and the Sentient City

I received an e-mail in my inbox. Mark Shepard was coming to The Hague for a lecture on the sentient city. It was part of a lecture series called The Knight’s Move, which aims on cutting across disciplines and rethinking the city. Even though I was not really familiar with Shepard (besides a book review on this very blog), I quickly became interested after reading the description. So I decided to pay Stroom in The Hague a visit and hear his story. A report of the evening.

Mark Shepard has a multi-disciplinary background. He is an architect, researcher and artist with a specific interest in new social spaces and contemporary network cultures. His researches home in on the implications of ubiquitous and wireless media, communication and information technologies, especially for urbanism and architecture. One of the first things Shepard mentions is that he tries to understand the contemporary city with these very explorations. In the contemporary city, he sees there is a strong evolving connection between the already existing physical of the material world and constant interactions, overlaps, references and interruptions with the immaterial. This connection is established through wireless network devices like mobile phones. Shepard then introduced the notion of the sentient city. What does he mean by that? 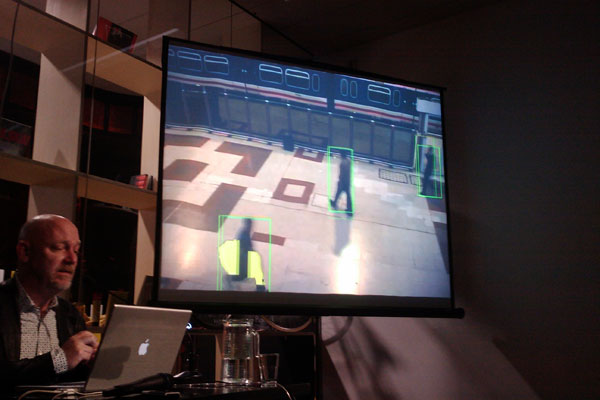 In the sentient city, media and technologies in the urban sphere reflexively monitor human behavior. They’re not only sensing, but are actively acting. Shepard names a few concrete examples such as CCTV tracking movements and scanning for possible threats, or traffic lights managing flows of transportation. He also mentions Starbucks as an example. Through customer loyalty cards (which I have discussed earlier in my blog post on Appie, a groceries application), people at the coffee selling franchise can see what is your favorite blend and eventually make you a personalized offer over time.

Sentient refers to the Latin “sentire” meaning “to feel/to hear”. Shepard makes clear that it’s something different than “sapere” which means “to know”. So in the sentient city the physical environment can feel you, hear you, sense you, but not know you. An important distinction which the artist and researcher tries to illustrate through the findings of Leibniz, who states that the gap between the physical and the immaterial is unbridgeable. Shepard shows a quote in his keynote:

And supposing there were a machine, so constructed as to think, feel, and have perception… we should, on examining its interior, find only parts which work one upon another, and never anything by which to explain a perception.

Sensing is something animals, some plants and some machines can do and often forms a reaction to a discrete input. Having sensation is something that involves an internal state in which information about the environment is processed so that it comes to have a subjective character. Internal processes are looked for. Shepard gives an example of cameras that try to recognize human moods and spirits and accordingly display the right kind of advertisement.

Toward the Sentient City 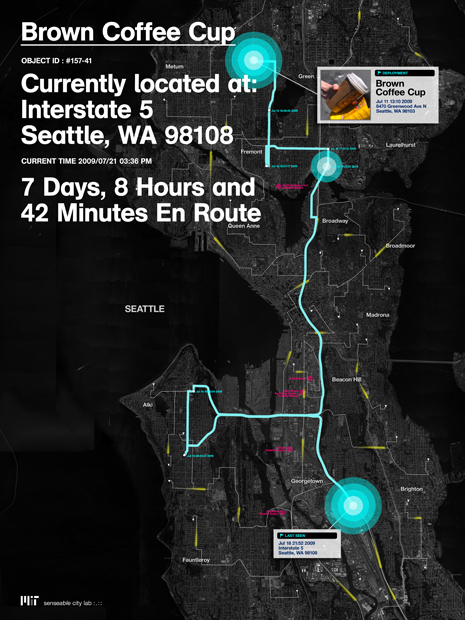 Trash Track: tracking the coffee cup you threw away

Written a lot about in science fiction, the sentient becomes more and more visible in other fields. What is our relationship to formerly inert non-human artifacts? Shepard tries to give a way to view this sentient city, but moreover also tries to give alternatives. In 2009, he curated concepts for the event Toward the Sentient City and at his lecture he shows them briefly. These concepts were actually realized and they contribute to rethinking urbanism and the contemporary city. I will not discuss all projects, but Trash Track definitely caught my attention. Through chips attached to everyday banal objects people use and throw away, a record is kept of the route those pieces of garbage make. Companies keep track of the production chain, but what about the waste removal chain? It forms an insightful application providing us with meta-data on consumption and waste disposal. Other projects from Toward the Sentient City can be found here:

Last but not least, Mark Shepard shows alternatives for surviving the Sentient City. What artifacts might one propose in ways to think about privacy, trust, autonomy and serendipity? Check out the video below to see some very interesting takes. Overall, it was a fascinating lecture. A lot of questions came to mind though, involving matters like production costs, sustainability models and information overload. Shepard doesn’t really provide us with an answer on this, but nevertheless gives us some great innovative views and alternative takes on future urbanism and the role of sentient technologies.

Tags: Internet of Things, lecture, Mark Shepard, Sentient City
One Response to “The Knight’s Move: Mark Shepard and the Sentient City”
Leave a Reply
This blog is protected by Dave's Spam Karma 2: 2705362 Spams eaten and counting...