Last Saturday was the third edition of the symposium ‘I don’t know where I’m going but I want to be there’ initiated by MOTI. The topic of this year symposium was about visual culture and how these effect us. A wide range of artists, journalists and critical thinkers took the stage. I was impressed by the quality of the talks. But everyone has a favorite and, in my case, it was the presentation given by MoMa curator Paola Antonelli. In a dazzling 45-minute talk she took the audience at the speed of light through the MoMa exhibition  ‘Talk to Me: Design and the Communication between People and Objects‘.

Paola Antonelli first explained how she sees the role as curator: her goal is to trying to see the potential and lead the way. No science fiction, but about having an intuition of what MOMA could be. The exhibition Talk to Me is a perfect example of looking in the future but still being grounded. The show is about objects, and how these have always communicated with us. The MoMa provides the following description:

‘The exhibition focuses on objects that involve a direct interaction, such as interfaces, information systems, visualization design, and communication devices, and on projects that establish an emotional, sensual, or intellectual connection with their users’.

Talk to Me is full of interaction: the public can use phones QR codes and Twitter to activate certain artworks. The show is divided into different sections such as Life, Objects, “Talk to Me”, “I’m Talking to You”, “Double Entendre” and Life. Ms. Antonelli showed during her talk a considerable number of art works that are exhibited. Too much to write all about and keep this an article you would read. So, for this reason I will only name a few, just to give an impression.

Within the section Talk to Me section Ms. Antonelli showed Pig 05049 by Christien Meindertsma. Pig 05049 is a book based on a three-year research project about all the products made from a single pig. Ms. Meindertsma chose one pig to show a bigger story, a story about the efficiency of food production and how a pig shows up unforeseen in all different kinds of products. She writes: 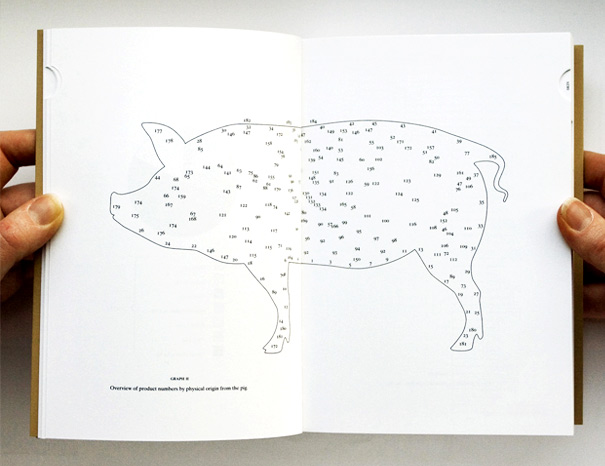 In the category Life was the famous EyeWriter collaborative created by a collective of different groups. The EyeWriter is a device which makes it possible to make art with only the use of eye movement. This also makes it possible to write something, the device is especially made for a graffiti writer, who is diagnoses with ALS in 2003. I have used the EyeWriter last year at the Cinekid festival and was amazed by the ease of use. It is a bit tiring – you have to stare really intense to make an ‘eye click’ on a certain letter – but when you don’t have the ability to use speech or physical movement it is definitely empowering. 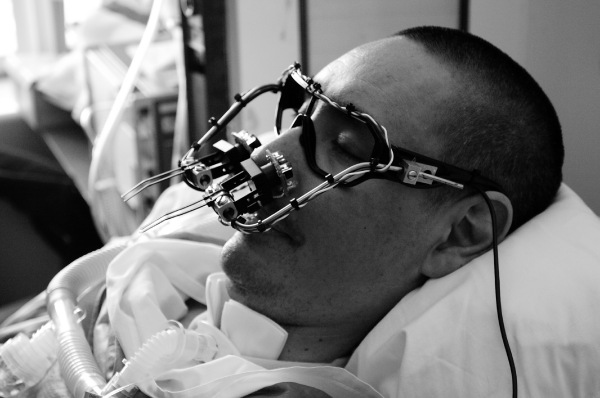 Karen Rosenberg from The New York Times wrote a review about the show who can be describes as  partly enthusiastic but also pessimistic. She partly explaines this by telling that she just read Gary Shteyngart’s “Super Sad True Love Story”. This book is often placed in the same category as Aldous Huxley’s “Brave New World and  George Orwell’s “1984”: it is about a dystopian world where direct human contact is obsolete, life resolves around the “äppärät.” Ms. Rosenberg writes:

‘Call me a reactionary, but I’m convinced that looking, not scanning or tweeting, is still the primary purpose of a museum visit’.

Ms. Rosenbergs argument is valid but I personally don’t agree with her: this exhibition is about interaction. One of the purposes of Talk to Me, as Ms. Antonelli explained in her talk, is to make people less afraid of technology, to show the human side in a playful sort of way. And yes, maybe we look way too much to our screens than to each other, but did we really contemplate that much before. The famous book from 1985 called “Amusing Ourselves to Death” by Neil Postman wrote almost the same thing, television was the dangerous object around that time.

I think this show tells us that even though we are entranced by moving images, we are still able to make worthwhile, smart objects. Technology can dehumanize, but it also can enhance our personal world and bring empowerment. Yes, there are threats within technology, but let’s try to think as Ms. Antonelli and all those artists in the show and on the symposium. Let’s celebrate the creativity behind technology. Let’s focus on the potential of all these technologies and this visual obesity. The only thing you need is a snippet of creativity, maybe a computer, or some electronic toys, a certain dosage of time, a lot of persistence and a significant amount of coffee.

For further reference:
Art works: check this link to see all the selected art works for the show.