An Evening with Facing Forward: Theorizing the Future 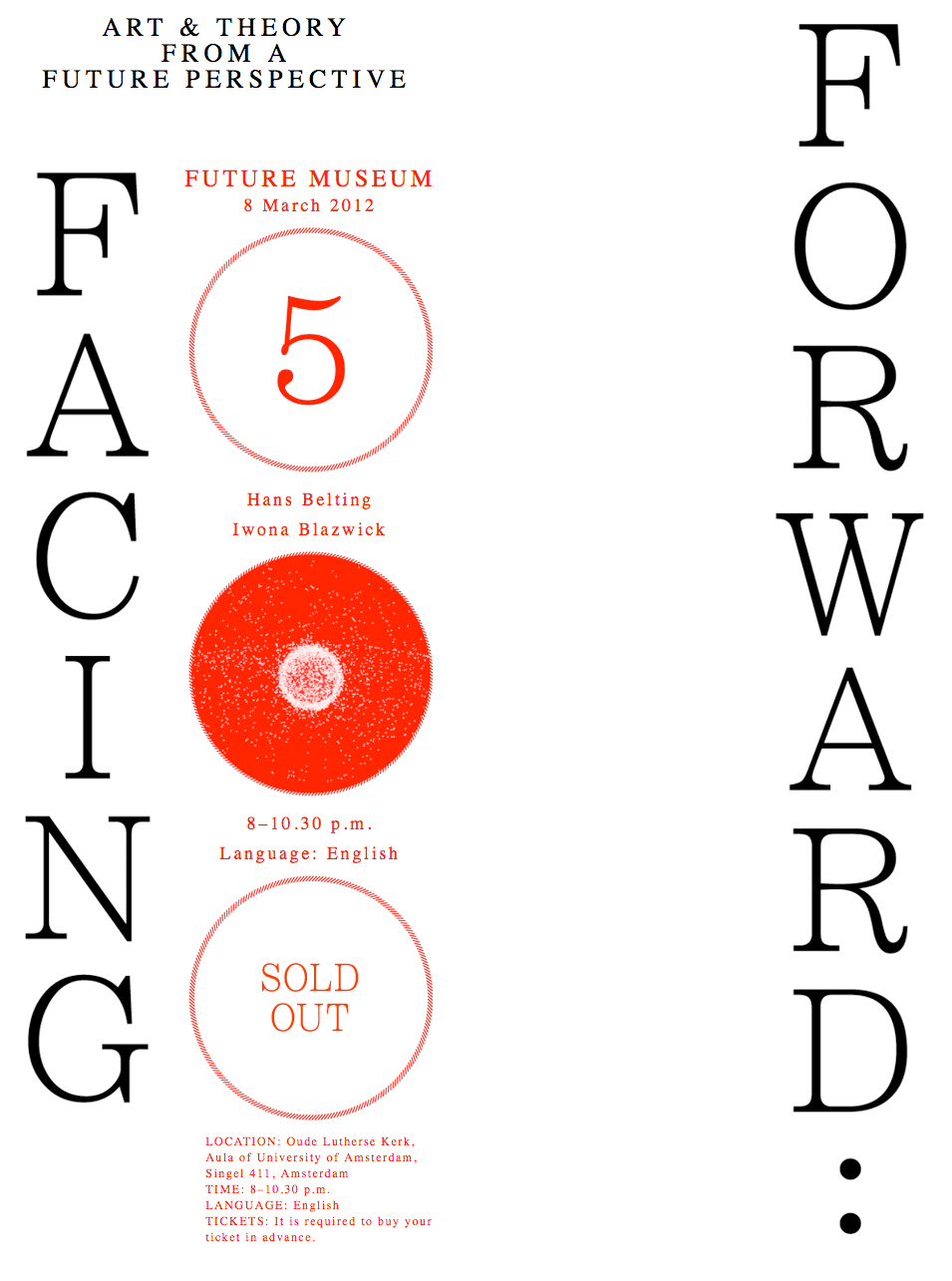 The five hundred forward-thinking individuals gathered for an inquiry into Future Museum were eager to pick the brains of Hans Belting, art historian; Rein Wolfs, Artistic Director of the Kunsthalle Fridericianum in Kasse; and Iwona Blazwick, Director of the Whitechapel Gallery in London.

Future Museum marked the fifth of a seven-part programming series unpacking “theory from a future perspective” across such institutional and cultural strata as tech, image, history, freedom, city and future itself. The series is the delicious brainchild of the Stedelijk Museum, University of Amsterdam, de Appel arts centre, W139 and Metropolis M, which aimed last Thursday evening to ask, “If the museum of the future will soon be organized completely differently, if the four walls of the ‘white cube’ are broken down and museums begin to function extra muros, what will the new theory of the art institute look like?” Far from apocalyptic, the answer may be the dawn from the living dead or, in their lesser known alias, the archive.

In his interview by Rein Wolfs, Hans Belting emphasized the relative newness of the museum as a product of the past two-hundred years. In contrast, a clash between “body time, museum time and real time,” as Natasha Ginwala phrased during the evening’s opening remarks, has always existed. The clash evokes a crowd in which infinite subjectives come into perpetual contact with new art practices and old art practices experienced anew. The past is never truly dead, nor the future truly realized.

“What museum are we talking about? What future do we want?” Belting stated over again, much to the derailment of Wolfs and the amusement of the audience.

“We cannot invent the museum for the rest of the world. That would be insane,” concluded Belting, the only safe certainty seemed to be that the life of museums is about change, entailing preservation ipso facto.

Belting’s illusive answers were perhaps better trapdoors into the methodology of the archive. Art institutions, like archives, are not instruments of nostalgia, chronology, or comprehensive catalog. For Siegfried Zielinski, the archive is a sensory flanurie that veers away from Old World thinking centered around one Mediterranean or one truth. Christiane Paul agrees, suggesting that the logic of the experiential database may be applied to an analog object or traditional medium. Similarly, Garnet Hertz and Jussi Parikka engage depunctualization: the disambiguation of a complex system into its components that remake the layers of a single object in a metaphorical circuit bend. Such theorists are united by a foregrounding of the background, or in the case of Hertz and Parikka’s “zombie media,” a foregrounding of the underground. Zombie media reintroduce humans to the potential thrill of Freud’s uncanny, which could include digging up the dead as well as theorizing the future.

In her lecture from an art curatorial perspective, Iwona Blazwick identified the long history of the museum’s transformation from high culture to mass medium. The museum has absorbed art practices centered around objects, performance, conceptualism and institutional critique to arrive at the “pop power” of contemporary institutions. Seen thus, museums bear relevance to the archive resuscitated from the trope of dusty shelves or impersonal databases.

Blazwick likened the museum of the past to a graveyard, functioning as a repository for the storage of artworks and consequently deadening them to the public. The new role of the museum is to act as a source of information and discursive space. The Future Museum has a responsibility to re-gift artworks to the public and exhibit them in the context of contemporary dialog. It is an entry coordinate for navigating the archive.

In 2009-2010, the Whitechapel Gallery exhibited The Nature of the Beast by London-based Polish artist Goshka Macuga. The aesthetico-political installation encompassed within its wide archival grasp a life-size tapestry of Picasso’s Guernica (1939) commissioned by Nelson Rockefeller in 1955. The tapestry hearkens to it’s tenure on display outside the Security Council at the United Nations Headquarters in New York as a deterrent to war; its shrouding during the 2003 speech by Colin Powell on Iraqi weapons of mass destruction; and the exhibition of Picasso’s original painting at the Whitechapel Gallery as protest of war in 1939. The Nature of the Beast constitutes an example of archival art practice and exhibition: the task of media archaeology and the brainy reward for the living dead. 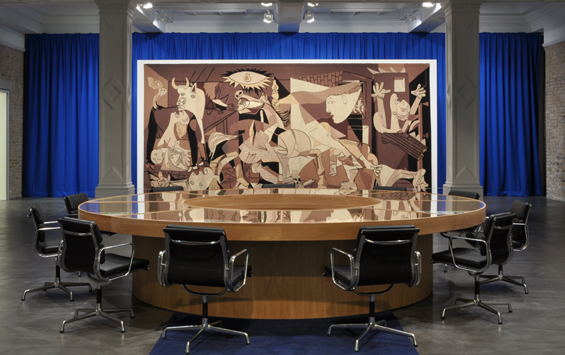 Blazwick charted a rise in the popular appeal of experiences that cannot be satisfied by TV or virtual mediation: “The desire for the screen mutates into the desire for something else.” The Future Museum, while archival, is not divorced from physical space. Blazwick identified the value of offering a destination and an architecture for experiencing artworks. Arguably, the vaster the archive and more numerous the  zombies, the more urgent a museum’s response to space becomes.

Blazwick cited the strategy of re-purposing existing spaces for museum exhibition, building the new without obscuring the old.  Future Museum took place in the University of Amsterdam’s De Oude Lutherse Kerk. With its church organ and pulpit still intact, the building provided an architectural echo to Blazwick’s sentiments. Such a setting begs the question of whether, in discussing the archival Future Museum, we need to speak of the living dead, or simply the living.

Lest talk of zombies still conjure the horror of apocalypse rather than the potential of the archive, think of it as Belting’s unadorned statement: “Don’t worry, museums change all the time. That is their duty; that is their history.”

This review is a follow up of the “Plan (Your) Obsolescence – Archive (as) Art” article. Plan (Your) Obsolescence  is a curatorial statement about archive art. The article explores the theme of archiving as art unpacking concepts such as order/disorder, reality/possibility, planned obsolescence among others. All taken from theorists such as Siegfried Zielinski, Peter Krapp and Christiane Paul. The article also provides a mini-exhibition of archive art relating to the concepts and statements.