Open data? We need to speed up!

Europe is ‘sitting’ on a supply that has a potential market value of billions of Euro, that could encourage new innovations, and that could increase the transparency and governance of public life. That resource is the data held by European public sector bodies. Many of these public authorities and services collect or create information relevant to their operations – from the timetables of trains to databases on carbon emissions, weather patterns etc. Public sector information may be, and sometimes are, offered as ”open data” in many forms and through various media: from simple datasets describing traffic or unemployment, to web services linking and mixing information from different sources, to interactive visualization of complex facts, to citizen-based data gathering and transmission. This way, new information is made available to scientists, citizens and enterprises for developing and offering value-adding services, thus forming a supply chain around widely available open data. Such sets of information have got a strong potential: if opened to public, the are recognized as highly valuable and providing an extraordinary opportunity for societies to move towards transparency, evidence-based decisions, better cohesion, public engagement and trust. But how can citizens engage with data? How can they push governments to publish information and claim transparency? We need collaboration and to convince others about benefits of open data. We need to stimulate the demand side, we need to speed up.

Global demand for open data became more noticeable after the president of the United States, Barack Obama, immediately after his inauguration in 2009, launched the ‘Open Government Initiative’. Before, in Europe, The European Public Sector Information (PSI) Directive was created in order to unlock Europe’s data and to realize its value to society. It was adopted in 2003, and implemented (in principle) by EU Member States in 2005. According to Gray, the directive has the potential to become the basis for ‘open by default’ information policies across Europe but it has not completely opened Europe’s data yet (Gray).

Since then, at the local level, many initiatives have begun that are focused on open data. Member States such as The United Kingdom, The Netherlands and France are already demonstrating this value. Needless to say, a movement for open government is getting stronger and stronger and the popularity of data itself in other sectors continues to rise. In December 2011 Euro commissioner Kroes announced on the new Open Data Strategy as part of the Digital Agenda. In short, the main areas of changes to the PSI Directive as proposed in the European Commission’s “Open Data Strategy”  are:

•    All data made available by government institutions must be able to be generally used for commercial and non-commercial purposes;
•    In principle, the costs charged by government institutions may not exceed the costs involved in the individual request for information (marginal costs – in practice usually free of charge);
•    Member States must introduce regulatory supervision to monitor compliance with the aforementioned principles;
•    the scope of the Directive will be extended to include information from libraries, museums and archives (Pekel).

A lot of very interesting open data-related topics were raised during an ePSI conference “Taking data re-use to the next level!”  that took place on 16 March 2012, Rotterdam, Netherlands. The big turnout of the conference showed the huge current interest in open data. According to the European Public Sector Information Platform

‘we are now reaching a new maturity level in the open data arena. We are ready to move to the next level, in terms of adoption by governments, in terms of the number and background of people involved, the mass and volume of data available for re-use, the business and distribution models, the size of the economic value involved, and the technology facilitating these developments.’

Neelie Kroes, Vice-President of the European Commission, explained to the audience how the European Commission plans to make access to public data easier, cheaper and more automatic. During her streamed speach she invited all open data users and producers to make a good use of already existing open data sources and set standards that ‘the best way to get value from data is to give it away‘.

The ePSI Trailblazers (re-use innovators, who’ve done something new and exciting re-using PSI in the last year) are setting this example very well. The international winners of the competition proved that open data allows creating fresh and exciting projects from multiple disciplines. The awarded projects: Dutch Open Cultuur Data, Swedish TrafikLab, Polish Sejmometr (trans: parliament-meter) and Slovak Znasichdani (trans: from our taxes) were awarded in four different categories. The two projects that caught my attention the most were the ones dealing with governmental data: Sejmometr and Znasichdani. 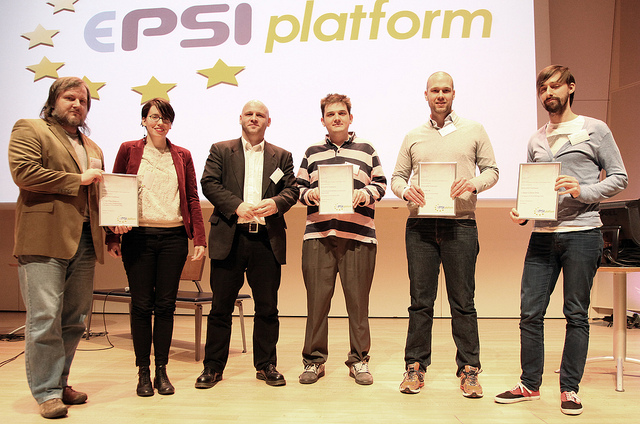 Sejmometr, awarderd in the category “Parliamentary Data,  is a website that aim to make governmental records available. It facilitates live tracking of the Polish Parliament. It is innovative, outstanding in terms of functionality and usability and providing many features such as ‘controlling Members’ work’ via live notifications, tracking bills or financial statements of the politicians. All of these in an easy-to-use and well structured interface. 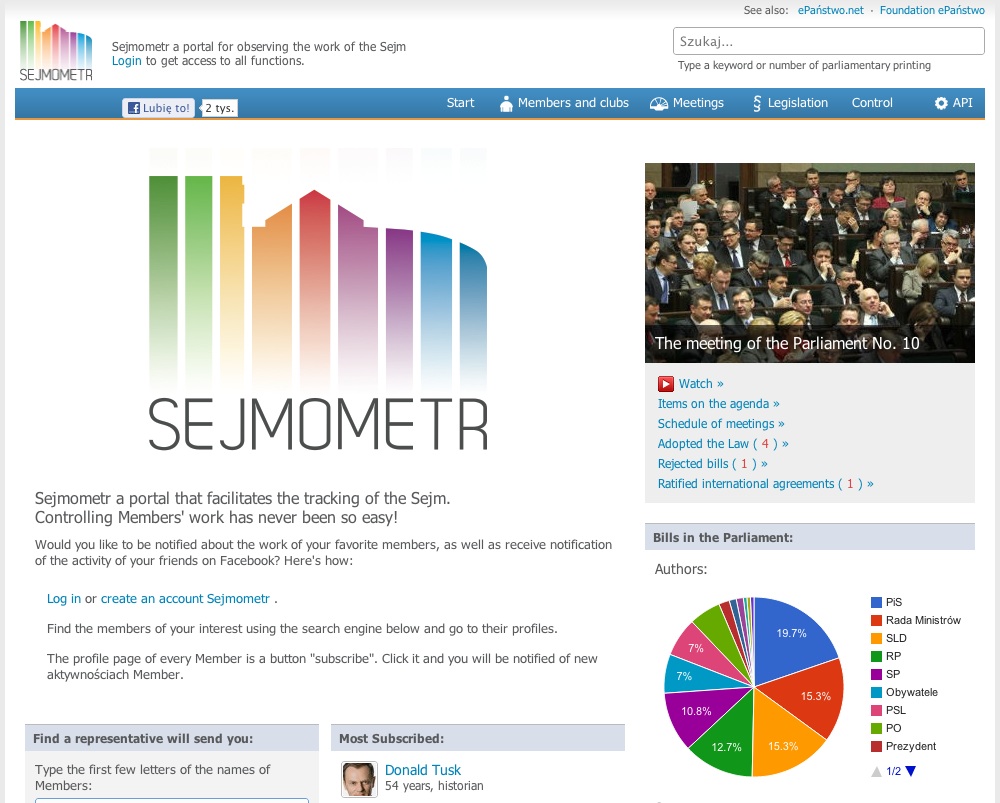 The Slovak ‘Znasichdani’ was awarded in the category “Public Procurement Data”. The project allows an easy search for persons and companies that do business with the state and therefore are getting paid with public money. The application draws connection between Slovak politicians, business people and organizations. As the creators of ‘Znasichdani’ explained, not everyone supports the initiative. The organization has been sued for providing information on a person who objects to publicize data on her businesses and wants to remove records about her from the database. The case is not yet complete. Observers from Slovakia and all other advocates of open data await a court decision in this matter. 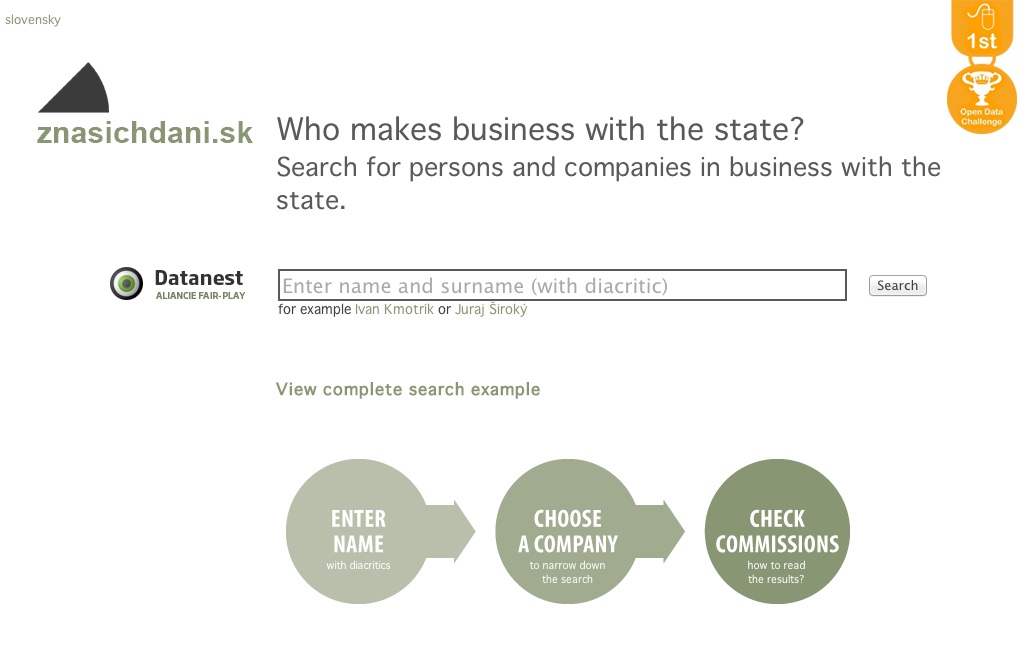 So how does open dat movement look like in these countries? In Poland, the “Open budget” project was started in mid 2011. The think-and-do-tank is promoting open government in Poland. The site promotes the idea of opening up public data on the basis of the Polish performance budget for 2011 and 2012. Even though The Ministry of Finance presents budgetary data, they are in the form of PDF files. They are public, but not compliant with accessibility standards, as they do not allow further re-use. Therefore, The Open Goverment Laboratory Team have gathered and transformed the data files in order to make them accessible in any spreadsheet.

Also in mid 2011 Polish Prime Minister Donald Tusk declared new policy toward a more open state during a meeting with NGO leaders in Poland. He said that all information funded from public sources should be available as public property, free for everyone to use it as they wish. This resource has not been made available yet though. Considering the fact that in 2008 The European Commission launched infringement proceedings against Poland and Sweden for failing to fully implement rules providing common conditions for the re-use of information produced, such declaration by Prime Minister is clearly a huge step forward for Polish open data policy.

To sum up, countries that have developed a similar initiative to the ‘Open Government’ advocate that it contributes to democracy and public services by keeping the citizens better informed and involved. How can they contribute? Programmers or hackers can help build technical improvements, organize brainstorming session Opening public data will boost the thriving industry that turns raw data into the material that hundreds of thousands of independent users can depend on, for example smart phone apps, such as maps, real-time traffic and weather information and more. Other leading beneficiaries will include journalists and academics. Kalampokis et. al argue that both governments and private sector are expected to develop the necessary technological infrastructure and establish the appropriate organizational processes. Governments could be involved and play an important role in this process because they own the data and thus can understand it better than third parties.(Kalampokis, Tambouris, and Tarabanis 237).
Fiona McPhilips hopes that with further analysis of activist behaviour, that some simple rules may be developed that will help activists optimise their use of Internet tools to achieve success in mobilisation and campaigning. (McPhillips 2006)

There is a good will and positive attitude towards open data. The coming period we have to transform it into tangible results. Learning from inspiring practices all around Europe is what we aim to do today in order to speed up the process.

(Read also Show, Give and Hack: A Call for Open Data by Bree Tahapary)