“We have lived through more than half a century of being constantly told that the future of food was artificial, the future of books, newspapers, medicine and school was virtual. And that we would soon deal entirely with computerized teachers and doctors through screens. For most of that time, the predictions seemed only too true” (Boyle, 2004).

I think my genre has had even less noticeable moment of transition into this new world. It’s not that much that we’d kept being told for a lasting period of time that it will happen, and then gradually started noticing and experiencing the changes. We were too young to think about it too much and to understand truly what was being said.
It was more like living a weird, unrealistic dream of the computerised future, full of robots etc. while playing with your hand-made toys, or doing the puzzle and then suddenly waking up one day seeing that it’s all out there, really happening.

The only two distinct periods I can remember from my childhood are as follows. First one, when I was pretty small and all kids were meeting after school to play together. We would use anything we could find to play with, e.g. little stones in various shapes to stand for money while pretending that we run a shop (and everyone would want to be a shop assistant behind the imaginary counter of course). The times have evolved, we even had a fake money to play with so we wouldn’t have to use stones anymore (although it was pretty creative I must say), but we would still use our imagination, and our hands, to come up with the remaining aspects of our fun. 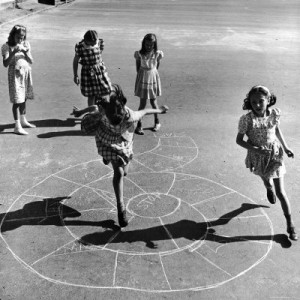 Then suddenly, one day, no one played outside anymore.
You realised that every kid in the school had a mobile, nobody went out, because they were too busy playing their own games on their stationary computers and if you found yourself without these, or a Messenger you popularity would drop noticeably, and you would certainly get a little lonely in the end.

My sister, who is just three years younger than me, has even poorer recollection of that first period. It’s almost like she was born into the digital era and so she considers it her own. It’s absolutely out of question for her that instead of meeting other students to do the group work they will just discuss it online. And for her it’s been like that all along the way. She finds it natural.

So does this upcoming  virtual world look likely to satisfy us after all?
Somehow, I don’t think it does.

It, isn’t so much that I want the world to be more real, or authentic – though I do. I’m arguing, citing the Boyle’s words here, that “this process is happening already, and is a direct result of people’s fear that what they consider real is endangered – a fear that every experience they are offered in the modern world is trying to persuade them, shape them or cajole them” (Boyle, 2004).

So when you buy your friend a glass of coke and say “Enjoy!”
do you just make your friend feel good about having a nice,
cold drink, or do you populate the brand’s tagline most of all?
With this word being officially sponsored by Coca-Cola,
doesn’t it give you a sense that the reality itself’s been up for sale?

On the other side, the very same people who yearn for authenticity enjoy the benefits of the virtual world. Let’s face it, they’re not going to give up emails, mobiles or interactive online games and why would they? “This isn’t a phenomenon where people long for the past, just one that tries to learn from it about what they want” (Boyle, 2004).

So what do people want then?

They want ‘real’ food – maybe organic – that tastes of something and comes from the real place on the map. They want real politicians- not the ones whose every public utterance is prior scripted and who even have the word “Wow!” on the teleprompter. They want the authentic relationships and friends, instead of never having to meet in person, and acquiring hundreds of friends on Facebook that are never really spoken to either.

Some people even get back to the analogue…

“Lomography is an addition to the cameras that we make and sell. It’s kind of a philosophy, and a way of shooting, (…) the way of creative, experimental, analogue way of living.”
The brand states that people prefer analogue cameras to digital cameras because analogue “is a lot warmer and analogue ends up meaning love. It’s nice to have something you can actually see and hold and feel and share with people”. “Feels a little more hands on and a little more of a personal touch”.

The demand for authenticity is clearly related to the growing suspicion of the world where we don’t have to see people or touch anything. The world, where ideas of ‘real’ are taken from people and then sold back to them in a nice package by brands.

“Mass marketing has become a very hard thing to do  because people don’t like to be seen as “normal” – they all want to be seen as individuals” says Martin Hayward, chairman of the forecasters Henley Centre.

“It is beginning to be clear that the dominant cultural force of the century ahead won’t just be global and virtual, but a powerful interweaving of opposites – globalisation and localization, virtual and real” (Boyle, 2004).

Lomography International, 2012. How do you balance analogue & digital in your life? [online]