“The internet of things: Our things are going to talk to other things, and they are going to be talking to us, and in doing so, it is going to open up the window of opportunity for somebody to interact with us in a manner in which we did not expect. The unintended consequence”

Continuous access to Internet has extended bullying from school grounds to home settings and everywhere in between. An estimated 60% percent of youth in the Netherlands owns a smartphone, which means that they are always online. The ubiquitous characteristic of cyberbullying makes the effect it has on targets more problematic. Olweus, however, states in his latest research Cyberbullying: An overrated phenomenon (2012) that cyberbullying, when studied in proper context, is a low-prevalent phenomenon. According to this research, the problem has not grown over time and has not created many new victims. Victims of cyberbullying are generally victims that are in some form involved in traditional bullying as well (Olweus, 2012).

This statement implies that targets are usually bullied both on school grounds and in cyberspace by the same group of bullies. I however, experienced something that contradicts this. During my work as a web-editor for a website focussed on young teenage girls, I noticed a group of girls were alienating one particular girl. These girls however, had never met or seen each other in real life. This means that the grounds where upon the group of girls were alienating and bullying the girl, differs from those in traditional bullying.

Usually bullying happens on grounds of looks, racial or religious background of the target. The target is often considered an outsider. Victims tend to be young and physically smaller than peers. Physical and mental issues which are clearly on display, is what makes them an outsider. They are picked on they appear insecure and cry easily, what makes the process of bullying more fun for bullies. Low levels of self esteem and confidence makes them an easy target, and being bullied will magnify this. 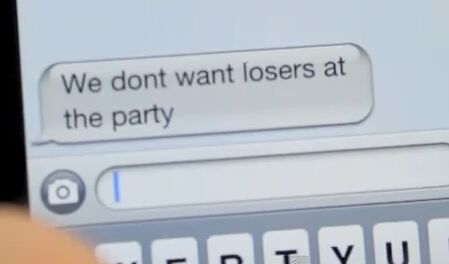 Olweus (2012) defines cyberbullying as bullying intervened by electronic means like mobile phones or Internet. Most cyberbullying takes place on social media, chatrooms and websites. One of the differences between traditional and cyberbullying is that cyberbullying is usually anonymous and bullies are not necessarily physically bigger or stronger than the target (Li, 2008). The reasons why certain teenagers become victims doesn’t differ from traditional bullying in most definitions. This would mean that the identity of the target in cyberbullying is as visible in real life as it is in cyberspace, and the bully generally hides his or her identity. This, however, is not the case in every form of cyberspace.

When someone is cyberbullied through social media, the identity of the target is clearly visible. This could give the bully the same reasons to bother him or her as with traditional bullying. On websites like the one I have worked on as a web-editor, the anonymous aspect is much more present. Teenagers create an account on the website to be able to comment on different articles. Yet, most of them only use their first name on subscribing and they upload a picture of an object or celebrity they like or no picture at all. This way, it is really difficult to judge if someone is insecure, physically weak or an outsider. So not only the bully is anonymous, the target is anonymous as well. The interesting thing is why and on what grounds teenagers still seem to want to alienate and bully someone under these circumstances. What effect will these new developments have on teenagers? And what new technologies will be available in the near future that will enable more cyberbullying?

Cyberbullying should not be underestimated in this digital time. The speed and the fact that content is indefinite on the Internet makes it difficult and impossible to reverse any regrettable deed. Cyberbullying, just like Internet, will keep developing and alter itself.