The art of work in the age of digital reproducibility

The contemporary working environment has changed beyond recognition in many industries; none more so than those invested in new media. The skill sets required to excel in such an environment brings with it a paradigmatic shift in workplace culture and attitudes; owing its legacy in part to the cyber-utopian, libertarian style of many of the industries’ leaders. These men, and occasionally women, (but interestingly for an industry that considers itself a prototype for liberal and ethical working practices, its leadership demographic is still overwhelmingly male)⁠, often experienced unprecedented success early on into their working lives.⁠ It is a reasonable proposition to make that, having never had to ‘bend the knee’ to ‘the man’ due to the groundbreaking nature of their work and hobbies, the young cyber-entrepeneurs would adopt a world view that Žižek refers to as ‘liberal communism’. Their claim? That, ‘..we can have the global capitalist cake (thrive as entrepreneurs) and eat it (endorse the anti-capitalist causes of social responsibility, ecological concern etc)’. This attitude trickles down to the way in which their workplace is run; as Žižek goes on to speculate:

…the young nerd has replaced the black-suited manager. In the new company headquarters, there is little external discipline, and (ex)hackers dominate the scene, working long hours and enjoying free drinks in plush surroundings.

A slide for Google employees in a hurry

One need only look to Fortune magazine’s ‘100 best companies to work for’ list for 2012 to see the success of these new age work practices; Google has ranked in at number one for the third time in its comparatively short period of existence. The company —  which now has its name in the Oxford English Dictionary and Merriam-Webster Dictionary in the form of a verb — is famed for its innovative office designs (their Silicon Valley HQ, aptly named ‘Googleplex’, contains a slide for those bored of using stairs, and firemen’s poles for those bored of using the slide); pampering its employees (decompression capsules impermeable to sound and light; full-time professional masseurs; free, unlimited and broad ranges of food in their canteens.. the list goes on); and its open culture (Google boasts  that  it’s employees are frequently able to ask questions ‘directly’ to co-founders ‘Larry, Sergey and other execs about any number of company issues’).

Professional massages available to all employees

Whilst these are generally considered positive changes to the way in which companies conduct themselves and treat their employees, the huge benefits to the corporation are often overlooked. Keeping your employees well pampered is likely to increase productivity and reduce sick leave; having an open culture similar to your start-up competitors creates the perception of decentralisation, whilst ensuring your innovative ideas become the property of Google Inc.; even replacing the stairs with slides and poles decreases the time spent transitioning from one environment to another, increasing on a micro-level the time you can spend at your desk, and by proxy, the time you are being productive. The new media environment is not always so streamlined and efficient, however.

Whilst completing my BA in Communications, I worked part-time as a CMS (content management system) operator, for a company which created solutions for organisations wishing to provide online coverage of sports events. My job varied from competition to competition, but generally involved running CMS software from my computer at my student home, and ensuring the data feeds that were received by this software was accurate and displaying on the client’s website correctly. If I encountered any issues, it was often a problem that I could solve myself; if not, a tech-team was available by Skype and phone, as well as an operations manager and the company director if things started to get really tricky.

The job was pitched to me as ‘work from home’, ‘watch sports all day’, ‘good pay’ and ‘easy’. All of these statements were true, with the only real challenges coming from the amount of hours I had to work at my computer (on some occasions, I would have a tennis competition running in the UK which would require me to be working from 7am British time, and a golf competition on the US west coast that would require that I continue to work until 3am British time, all without any form of extended break); and reducing the collateral damage of system issues to my employer’s reputation, by appearing as professional as possible (as a small start-up company, the CMS programs often suffered teething problems, with version updates coming out on occasion as often as two times a day). After a couple of days of working extremely hard, I started to consider how this role could be managed to my advantage. Thanks to the agreed channels of communication (generally Skype instant message or e-mail), perceptions of my work hinged entirely on:

With that in mind, it was time to start cutting corners. By downloading Skype to my phone I was able to start showering again on ‘company time’ (my time off between 3am and 7am was already allocated to sleep!), safe in the knowledge that I would be able to quickly tend to any communications from a colleague or client. I could work from bed, surrounded by junk food, and wearing pyjamas with no consequence. I even took advantage of the dongle I had been provided (incase of a lost and irretrievable internet connection at home), to keep the software running on my laptop, in my backpack, whilst I went shopping. I was, and still am entirely confident that I could continue to do that job just as efficiently whilst freely roaming the city with little or no extra risk. The convergence of media, and the ever-increasing drive towards mobility meant that 90% of my work could be carried out on a smart phone, only having to open my computer when I encountered an issue. I felt like I was fighting the system and winning; no one was meant to be paid whilst they bought new clothes or went out to lunch! And yet, I knew that if my colleagues discovered my behaviour (or worse, my clients), I could say goodbye to that job quicker than Google returns your search results. This often left me considering the role that perception plays in our working lives, and reminded me of a scene from an episode of Curb Your Enthusiasm called ‘Casual Fridays’:

Despite the confidence that I held in my abilities to carry out my job in a multitude of environments, I felt it necessary to maintain a certain illusion about the way I worked. I mentioned to a client that I did my job from home on one occasion, and noticed the way he was interacting with me instantly change. Once I had acknowledged this, new media formats made it easy for me to gatekeep and control peoples perceptions of me. I would not lie, but rather let them assume that I was working in a plush, contemporary office like the ones provided to Google employees. 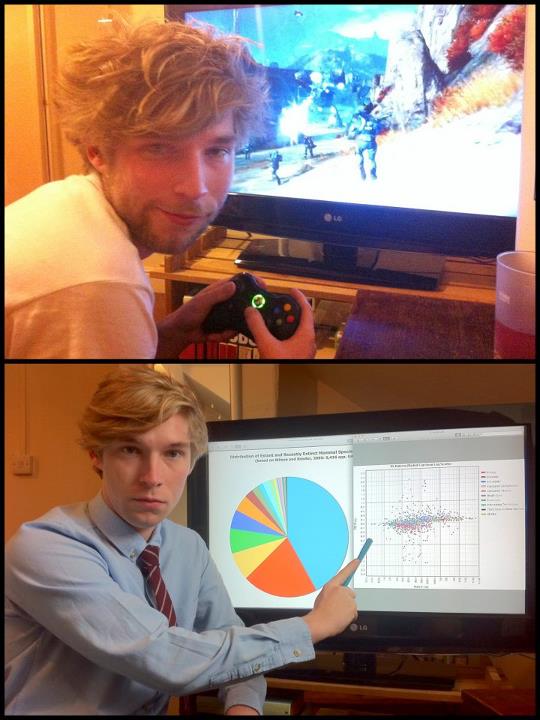 My friend Paul, kindly providing an example of the same person from two very different perspectives

In the end it boils down to representations. Earlier on in the ‘Casual Fridays’ episode, the lead character Larry, also bumps into the casually dressed lawyer at a restaurant, wearing a similar outfit to the clip. “What’s this?” he asks. “It’s casual Friday”. “Oh, so does that mean you’re going to be casually drafting my new will and the contracts I brought? What the fuck! I pay you to be careful and rigorous, not casual!” For Larry Davis, the creator of Seinfeld and the lead character in this show, (who is interestingly being played by himself, a digressionary consideration for the concept of mediated representation), the social codes and expectations are that his lawyer should be wearing a suit; it is an external indicator of how he conducts his business. When this is disrupted, it causes a change to Larry’s reality that makes him uncomfortable; subconsciously he must have been aware that his lawyer does not always spend his time in such clothing, but to be confronted by this fact still impacts him. Similarly, whilst the medium of communication (and therefore representation) has changed significantly in the new media environment, in itself affecting representation of the self and the relationships between its users (for an interesting article on the changes taking place to French formal and informal language attributed to the uptake of twitter, click here), this does not warrant full disclosure. We are often lulled into a false sense of security by the paradoxical nature of networks – compressing space and time between senders and receivers, and yet often increasing their degree of separation due to the awareness of the message’s mediation; inputting your data into a machine, knowing that it will be output by another half-way around the world, next to you, or even on another of your own devices, but never as directly as — and frequently with less consequence than — communicating in-person. One need only look at the way in which members of the forum 4chan often conduct themselves for evidence of the attitude that often persists in such an inconsequential mediated environment, as previously discussed on Masters of Media.

Technology has clearly created the potential for a blurring between work & play; office personas & private personas; as well as our perceptions of other things such as hierarchy within an organisation. For many, a merging of these two realms might be considered unacceptable: an encroachment into areas of their lives that they do not feel their employers should have access to. However, in an environment that estimates ever increasing retirement ages, and proposes 6 day weeks to recovering economies, I welcome the increased comfort being provided by new media work environments, and the increased freedom by new media technologies. Besides, would your perception of me change if you knew where I wrote this blog post?