Everyone loves a good story: immersing the audience with transmedia storytelling

Henry Jenkins first coined the term transmedia storytelling in his equally named article in the January 2003 issue of MIT Technology Review. Jenkins describes how the fusion of different types of media and the content explosion of the user generated web has produced a new way of interacting with the audience. He proposes three key concepts to define the audience-entertainment industry relationship:

To illustrate what Jenkins wrote about in 2003 we can look at the immense fan base surrounding the Twilight Saga. The story first came to the audience’s attention as a book, resulting in a four-part series to be found on many teenage girls’ bookshelf. It was then adapted onto screen causing a worldwide fascination with the story’s vampire-human love story, resulting in one of the highest grossing movies so far and thus, produced four more. Google “twihards” and you will find a very large, highly devoted community of fans, sporting Twilight clothing, make-up, tattoos, naming their newborn children after characters in the films and so on. A fan base might be a slight understatement; it’s more like a cult.

In this particular example it is clear how the audience itself plays a large role in how the story told grows into something much more than the original book. This is the element of transmedia storytelling: a story is told without being bound to one channel of distribution. It is a story that lives on after distribution. You don’t have to have read the book to understand the film. You don’t have to have seen the film to know about the characters. The audience has taken the story on and made it its own while the entertainment industry supplies it with sufficient content and possibilities to keep the audience wanting more.

Storytelling as a marketing mechanism

What I want to illustrate here is that transmedia storytelling is not only allowing an audience to be immersed within a story, it is also a highly effective marketing mechanism. Entertaining an audience by allowing it to be part of a story (or product, brand) and giving it the tools to interact with it causes the audience to become a part of the story and to identify with it. In the case of branding, this is probably as good as is gets.

In the past years there have been a few cases where transmedia storytelling has been implemented as a marketing strategy, such as the Old Spice “Man your man could smell like” YouTube videos, The Dark Knight “Why So Serious”-game and Microsoft’s “The Vanishing Point”-game to launch Windows Vista. “The Old Spice Man” existed of a string of YouTube clips with a persona (The Man Your Man Could Smell Like) gone viral and having this persona interact with the audience by responding to comments left at previous clips, therefore making the audience a part of the online phenomenon. Why So Serious and The Vanishing Point games were both on- and offline games where the audience had to solve mysteries by working together all over the world within a certain time frame in the build up to the launch of the film and the new Microsoft operating system.

Here in The Netherlands there have been a few cases as well, one case I would like to mention is “Their First Time” (“Hun Eerste Keer”, 2011). Their First Time is a transmedia storytelling campaign for SOA/AIDS Netherlands which I have helped develop myself. The campaign was aimed to get teenagers to talk about their sexual boundaries and get the discussion going. Since sex is not a subject teenagers often feel comfortable talking about with adults our approach was to get them to talk to each other. Another reason for taking a different approach to how we would get the discussion going was that teenagers often aren’t comfortable with talking about their own sexual experiences, so we created persona’s they could talk about. 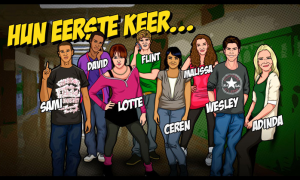 The campaign immersed the audience in a story about a group of eight teenagers about to experience their first time (sex, a first kiss, a first boyfriend, etc.). The characters blended into the audience’s lives, approaching them and making a personal connection through channels such as blogs, YouTube, Facebook, Twitter, Spotify, and comics, connecting to the audience in their own habitat. This resulted in a very successful campaign of which 80 percent of the target group responded positively to this new approach.

Although the term ‘transmedia storytelling’ was already coined in 2003, it still seems relatively new within the use of marketing. It has however already been proved highly successful as a way of establishing a much stronger bond between the audience and the storyteller, whether a brand, a product or an actual story, than simply having a one-way connection in which the audience is a passive recipient. I am curious to see how many new and more effective ways of advertising will result from the participation of the audience, by a way of letting the audience influence creating an affinity with a product or brand by using different media channels. Creating fans instead of just consumers through experience.

Mike Monello, partner and ECD at Campfire, one of the biggest transmedia marketing agencies, talks about how to create a successful transmedia story.

Babies, Buns And Buzzers: What 100 years of experiential entertainment can teach us about transmedia storytelling from Campfire on Vimeo.