The 17th and 18th of September PICNIC 2012 was held in EYE Filminstitute in Amsterdam. At the international gathering, about 3000 professionals were present from different fields like  business, technology, government, NGO’s, education and the creative industries. The theme of this edition was ‘New ownership: The Shift from Top Down to Bottom Up’. But did the event follow this theme in it’s way of presenting? Since we were both present at the event, we want to critically review PICNIC 2012 and the way it dealt with new ownership, bottom up organization and collaboration.

New ownership: The Shift from Top Down to Bottom Up

A new notion of ownership has emerged now the Internet has increased our knowledge, connectivity and sense of agency. Social media give us the feeling that we can make a difference. How does connected technology empower us to drive change on a personal, business and global level? And how does this create a (new) sense of ownership? These are some of the questions that PICNIC 2012 wanted to address.

This trend  of ‘new ownership’ develops against the background of a rapidly crumbling confidence in traditional institutions and organizations that have traditionally highly governed what the world of today looks like. Citizens are willing to take action and to design their environment themselves.

“People are taking matters back into their own hands as they realize that everyone can potentially fulfil a role regardless of their position or location. PICNIC is focusing on how connected technology is empowering people to drive change on a personal, business and global scale.” (picnicnetwork.org) 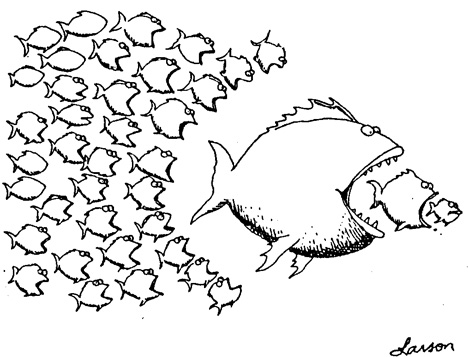 A good example is the Arab Spring, but also the growing call for transparency in the form of an open government and democracy. Citizens of different European countries  try to replace the existing financial institutions by local barter. Expressions of DIY (do it yourself) and DIT (do it together) are emerging everywhere.  For example the Quantified self-movement in health care, the growing popularity of DIY design and production platforms, and the exploding number of amateur productions and content distribution platforms. We were both very curious how PICNIC would realize these concepts at the event.

Already during the promotional campaign, PICNIC tried to incorporate the topic of this year into their promotional strategies. They invited everyone to design their own PICNIC campaign poster by printing the PICNIC font and combine the letters to make an announcement of the festival. Every week a new poster was chosen to use for the promotion of the festival. This was a well chosen bottom up process, where visitors were able to contribute to the festival and create the taglines of PICNIC themselves. 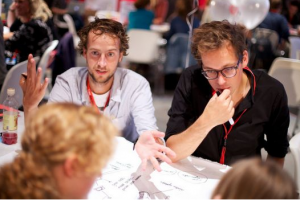 At the first day of the festival the most talented graduated students came together at PICNIC, at the HOT100 meeting that was organised by Virtueel Platform. The professors and teachers of the Dutch universities and academies had selected the students with the best theses and projects.

After the students presented their work to each other, cultural companies and organizations asked the students how they would address some topics. After an hour it was time for the students to ask the companies how to survive in the professional field. Therefore it became a very informal, bottom up and dynamic discussion between all attendees, both the graduates and the professionals.

The last session of Tuesday was concluded with a socratic discourse. Socratic discourses are by nature very bottom up. The idea is that attendees decide on a question they collectively want to address. Then everyone can contribute to answer the question, starting by summarizing everything that has been said before. This way you can collectively work to an answer. Although this discussion was one of the most interesting events of the conference, it was actually very top down. There was no room for the audience to join the conversation, suggest questions or have their own socratic discussion. The speakers were literally on the stage having there own, closed discussion. Where at other conferences, like TEDx or an Insitute of Network Cultures conference, the audience can ask questions live or via twitter, at PICNIC there was no time for questions from the audience and not even a live Twitterfeed in the room.

Furthermore, the price for attending the conference was very expensive: €500 for the full event and €375 for an one day ticket. This could be a problem for students and non profit organizations, which may result in an event with a homogeneous audience of well-off professionals. In contrast, TEDx has a system where the audience couldn’t buy tickets, but can only get a ticket if they are interested enough. Moreover, at TEDx the speakers are chosen by the audience. They can vote who they want to present at the event.

Next, there were no organized physical spaces where the audience could meet each other and have a conversation. It would be very interesting to realize a conversation with all the people present at the conference, because they are all interested in the same topic but come from different fields and backgrounds. Appsterdam had planned a moment for ‘speeddating’ the audience during PICNIC, but this happened outside the actual conference hall and was not included in the official program. 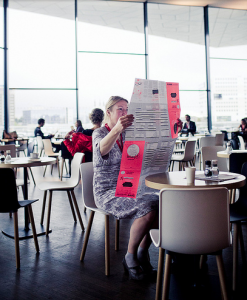 The topics that were being addressed and discussed during the festival, all dealt with new forms of ownership and bottom up processes in their own way. Content wise the festival was definitely a success: there were not only speakers from big commercial companies, but also representatives from DIY and bottom up initiatives. However, the way that the festival approached the audience was not always bottom up at all. Next year we hope PICNIC will be more open and interactive.

Dale Stephens talked about hacking the educational system and Uncollege.org