POWER OF THE PEDAL: Pirates bring the interactive screening experience to the public 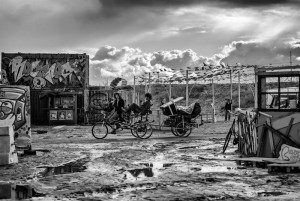 On Saturday 29th of September, Pirate Cinema attended Polderweg Damoclash festival, (located in Amsterdam-Oost), with their five-wheeled bicycle installation. Pirate Cinema’s essence lies in the synthesis of the mobile media and in its inclusion of the socially engaged message of public participation. As a non permanent object, rooted in a physical space, but at the same time detached from it, it has acquired the ability to create a media space anywhere. A communal bicycle that is exposed to visitors, invites them not only to engage in the viewing experience, but also to support the functioning of the instrument itself. If audience participates, a common experience is created. It is a unique practice that forms a cross-combination of the locative media and the urban screen projections.

Pirate Cinema is a five-wheeled bicycle that enables three people to ride it, or produce electricity, by the simple act of pedaling (forward and backwards accordingly). This moving installation is equipped with an audio-visual and sound systems that allow various interactions to happen. Conceived in a form of installation, but being a part of a wider movement, the organisation behind Pirate Cinema promotes principles of social justice by engaging notions of art in the public space, and empowerment of people and sustainable energy. Short films, movies, experimental music and performances are all displayed in the pursuit of creating fun, and sustainable media art.

Regarding the medium content, selection of material undergoes a democratic process, in which everyone willing to participate and provide the content for the screening, play a tune, or be a DJ, is free to do so.  It presents us with an alternative to a static movie-night-out at the cinema.

Pirate Cinema and its collective bear close resemblance to that of the urban screen projections. It is stated that, in doing so, Pirate Cinema managed to engender collective moments in public spaces (Taylor; 2005).
The experience of film, photo and music is provided  by the audience itself – producing electricity by the act of pedaling enables technological equipment to function. Furthermore, audiences are stimulated to engage with the Pirates by bringing and plugging in their own material. In addition, this onsite engagement occurs in a real-time. 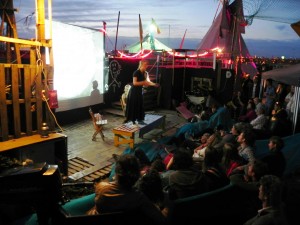 Through Pirate Cinema, we are expected to partake in a social activity, that not only embodies active participation, but also includes technological and socio-cultural engagement. Indeed, as Auerbach claims, these types of urban screen projections are experimental, and at times things can turn awry. Sometimes equipment fails to work, movie formats collide with the software used, or no one feels like cycling.

Bringing social issues closer to their on-wheels-cinema, is an unconventional, but at the same time very effective way of guiding the visitors into their roles. Not as passive viewers, but as active members as they are expected to take part in the production of artistic work and experience. The result is a shining cinema with beams of light projecting onto it, without the necessity of a permanent space, and all charged by the mere power of two pedals.

More curiously, Pirate Cinema does not follow a specific set of rules, no regular code of conduct and up til now it has remained under the radar. 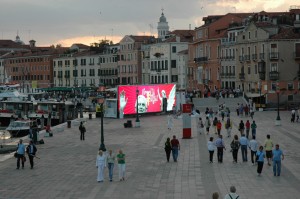 dropstuff.nl on display during the Venice Biennale, 2011.

Pirate Cinema forms part of a number of interactive screen projections in the City of Amsterdam and the Netherlands at large. Another relevant project, Dropstuff.nl, also represents a great value. This organisation embeds urban projections in public spaces, such as city squares, parks and train stations in order to stimulate active participation.

DROPSTUFF.nl – a ‘museum without walls’, functioning as a cultural space, and displaying art with the use of a digital medium, making it available to the wider audience. Artwork presented includes movies, media artifacts, or games of an artistic value. Its main purpose is to bring the digital media work into the public space, and initiate participation in live broadcasting of the artistic program. Daily exposition in different locations – such as railway stations, central squares, or parks, is a method of increasing awareness of new media arts among general population. Dropstuff Netherlands also provides smaller screens for the museum exhibitions, cultural and educational institutions, and is responsible for the live broadcasting online on live.dropstuff.nl. Events, as well as the online streaming, can both be synchronized in a real-time, which makes the interaction possible with as little as the usage of a simple broadcasting software on smartphones, or the passers-by participation in games played with other users.

By emphasizing the elements of play and interaction, Pirate Cinema and actors like dropstuff.nl, create a sphere of negotiation and a public conversation regarding the particular screening experience. Yet, it becomes clear that the Pirate Cinema beams a larger sense of the immediateness, the re-interpretation of the notion of activity performed inside, as opposed to the aforementioned commercial cinematic experiences. Whilst doing so, visitors internalise not only the screening, but also gain more understanding of the elements needed to take on, feel, see and experience the performance. They expose the extent, to which the simple and invisible things like electricity are vital to your experience of the screen. Within that framework, they challenge traditional concepts of presence, distance, and time, while engaging their audience with one singular simultaneous experience.