The End of the Golden Rule 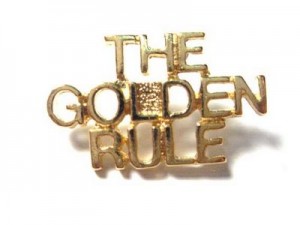 Barlow claims that the governments don’t know anything about the virtual world, because they don’t know the culture, ethics and the unwritten codes. According to the manifest, the interference of the governments is based on the assumption that there are problems in cyberspace that need to be solved. However, Barlow states that the problems in cyberspace are in now way comparable to the difficulties in the real world, because of the absence of physical bodies. Barlow defines cyberspace as an imaginary space where people communicate using the web. Cyberspace is a world accessible for everyone and it is characterized by freedom of speech. There are no identities and personal property does not exist. In contrast to the real world, there is no matter available in cyberspace and physical coercion is impossible concerning to Barlow. The virtual network of computers creates its own frameworks and these are independent, free and self-regulating. The only law that this manifest generally recognizes is the Golden Rule; this principle is based on reciprocity and the idea that one should treat others a one would like others to treat one self. In the last part of the declaration Barlow writes that the protection of cyberspace by the governments will lead to nothing. Ideas, shared in cyberspace, cannot be seen as industrial products and these ideas should be reproduced and distributed infinitely at no costs. The ultimate aim of Barlow is to create a civilization of the mind in cyberspace more human and fair than in the world of the governments.

Many supporters signed this manifest of Barlow even though it is an unrealistic aspiration of a utopia that will never be realized, partly because the capitalistic ideology has penetrated cyberspace according to the Dutch professors Jose van Dijck and David Nieborg Cyberspace cannot be separated from the real world. They constantly influence each other. Since the emergence of the Internet, the web became more complex and bigger and it is very important that there are certain rules. Another point of critique by van Dijck and Nieborg is that Barlow in his manifest assumes that all users are equal. According to Barlow, the Golden Rule principle is the only law in cyberspace. This rule, based on the idea of reciprocity, assumes that all the visitors of the virtual world have the same goals, but that is not true. Not all the users of a network deliver an equal part to the realization of the content on a network and eventually this will lead to a certain hierarchy. This structure of power is not a result of interferences of the governments of the industrial world, but it is a consequence of the existence of the capitalistic ideology in cyberspace. An example of this capitalistic ideology is the increased demand for personal data of the users of a website. The consumers are willing to share their personal information, according to the English professor Greg Elmer, because they are rewarded with discounts on various products for example. The active companies on the web use the information of their customers to predict future trends, which can be a great advantage. Because of this interaction between companies and consumers personal data can be seen as a tradable good. Therefore there is a connection between the physical body and the behaviour of the visitor in cyberspace. The assertion of Barlow that physical bodies do not exist in cyberspace is therefore not true. The American professors Kevin D. Haggerty and Richard Ericson  also describe this development:

‘Today, however, we are witnessing the formation and coalescence of a new type of body, a form of becoming which transcends human corporeality and reduces flesh to pure information. Culled from the tentacles of the surveillant assemblage, this new body is our ‘data double’, a double which involves ‘the multiplication of the individual, the constitution of an additional self’

This data double only exists by the presence of the World Wide Web, because of the interaction between the companies, which collect data, and the input of the users in cyberspace. The data double shows that there is a clear link between the population of the real world and the users of the virtual world of the computer. This is also a reason why the ideologies of Barlow’s manifest can’t be realized. Another example of the existence of the capitalistic thought in cyberspace is the use of personal data in the development of marketing strategies. According to the professor in communications Joseph Turow companies collect data of consumers to estimate if these consumers could be potential clients. Turow introduces the term Niche Envy. Niche Envy leads to two different kinds of competition between on the one hand, the companies that compete to gather the best customer database and, on the other hand, the consumers who want to create as much advantages as possible by sharing their data.

These are all examples that the principle of the Golden Rule doesn’t exist on the web. The exchange of information isn’t always voluntary. Personal data is a product and the users are willing to share their data because they are rewarded. Because of the Niche Envy a battle arises between the consumers and between the companies. Eventually this leads to a kind of hierarchy and this does not match the ideologies of Barlow’s manifest. An important aspect to notice is that the role of the governments in this sense is irrelevant. Apparently companies regulate the web instead of governments and Barlow has not taken that in account when he wrote his manifest in 1996. The governments are not profit oriented in contrast to the companies. The web has become more complex and bigger and therefore it is very important to set up certain rules to protect the users. If Barlow wants to write a new manifest he should focus his critique on the commercial agencies in stead of the governments.

The ultimate aim of Barlow to create a civilization of the mind in cyberspace more human and fair than in the world of the governments has not been achieved. The world in cyberspace is more like a copy of the real capitalistic western world and it is all about making profit. The principles of the Golden Rule will always be a utopian dream.