About Joey de Jong
My name is Joey, I am 23 years old and I live in Haarlem, close to Amsterdam. In June 2012 I finished the bachelor Media & Cultuur at the University of Amsterdam and I am currently following the Masters programme New Media & Digital Culture on that same university.

Last month was another big moment for us new media geeks: Apple released the iPhone 5. It is even lighter, slimmer, faster and has a higher resolution than the iPhone 4S that came before it. Like with so many of Apple’s products, the iPhone 5 was highly anticipated and millions of people couldn’t wait to get their hands on this new toy. It was pre-ordered more than two million times in just the first 24 hours. It received many favorable reviews from commentators and reviewers and is a huge commercial success, supposedly being the fastest selling Apple device ever. All happiness and joy for Apple so it would seem. But as you likely may have noted the iPhone 5 appeared in the news negatively quite often in the last few weeks. A bad working navigation app, a purple haze in photos, scratches and problems with the wifi connection were amongst the most heard complaints. These seem like minor issues, but this is certainly not the high standard quality that people have come to expect from Apple. Thus the drift of a lot of news articles is that the iPhone 5 might be the best selling iPhone, but it doesn’t seem to be the best working iPhone. Are the problems really that big or are the news media placing too much emphasis on the negative qualities of this extremely popular device?

In this mini research I examine the way the iPhone 5 is portrayed in the Dutch news by doing a small content analysis. By looking at the number of primarily negative articles about the iPhone 5 on the websites of five big Dutch newspapers I try to get an overall sense of iPhone 5’s image in the news during last month. By primarily negative articles I mean those articles which really have a focus on some of the supposed flaws or any other problems of Apple’s product. General review articles which both pose positive and negative aspects are thus not included in this category. Because my focus is on the number of negative articles I group all the other articles specifically about the iPhone 5 under the category ‘Neutral’. When the results are put in a chart it looks like this: 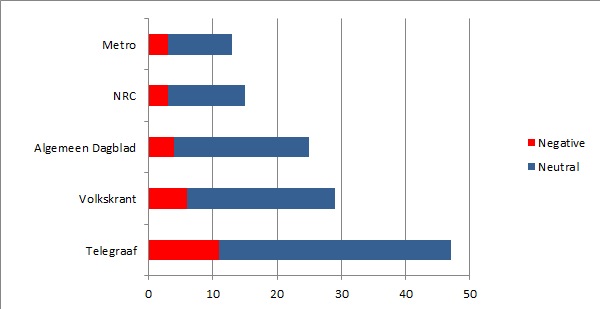 The first noticeable thing is that the Telegraaf has written by far the most about the iPhone 5 last month. This is because the Telegraaf has a special section for digital media called ‘Digitaal’, in which most iPhone 5 articles are found.  When we have a quick overview of the actual content of the articles from all newspapers it becomes clear that most articles in the Neutral category are reviews or announcements of the iPhone 5 or articles about the financial success and the massive lines of people in front of Apple stores during the launch. The negative articles are in most cases about the before mentioned issues such as scratches and a bad navigation app, and a few articles mention the lack of a wow-factor of the iPhone 5. They say it is just not innovative enough thus making it a bit boring.

Interesting to see is that the percentages of negative articles are fairly equal, all being around 20% (ranging from Algemeen Dagblad with 16% negative articles to Telegraaf with 23,4%). This means that approximately 1 in 5 articles about the iPhone 5 is predominantly negative. This number is quite high, especially when we compare it with iPhone 5’s biggest competitor, the Samsung Galaxy S3. First of all, Samsung’s device is mentioned a lot less on these websites than iPhone 5. Metro and Algemeen Dagblad only have 3 articles about the Samsung Galaxy S3 in the past six months, NRC has 4 and Volkskrant 5, and none of these would fall under the negative category. Only the Telegraaf has quite a few articles about the Galaxy S3, but only 3 of those would count as negative compared to 17 neutral. Both the Samsung Galaxy S3 and the iPhone 5 are extremely popular, but it seems the iPhone 5 is a much hotter topic for the news media, in terms of ‘neutral’ articles but especially in terms of negative articles.

With this little research I showed that, regardless of it’s great commercial succes and many positive reviews, news coverage about the iPhone 5 is for a large part negative. Minor bugs and errors are often enlarged in the media, though it is clear that Apple’s new device does have some serious issues. These issues about a product with which so many people are practically in love with and describe as perfect is what gives this kind of news its entertainment value and I reckon that is why the media pay so much attention to all the little flaws. Of course this research has its limitations, since the websites of these newspapers aren’t the best sources. Some of the same articles where published on multiple newspaper sites, because some of them come from the same general source (ANP). A full scale analysis of the actual paper versions of the newspapers would probably be a little more insightful. Nevertheless, I think these samples do have given a good impression of iPhone 5’s image in Dutch news media.