[POSTSCAPES] THE STORY BEHIND YOUR TRASH 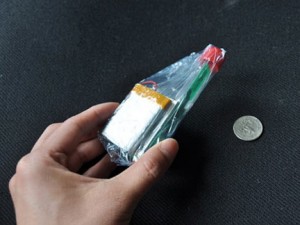 Do you know the story behind your paper coffeecup? Are you aware of its original source and what happens to it once you dump it into the paper-bin?

In a convincing video regarding the Story of Stuff, Annie Leonard provides a compelling and graphic overview on the consequences of conspicuous consumerism. The film offers a renewed perspective on a discourse regarding the necessity of new alternatives to a consumer-frenzied  society.

Whilst the Story of Stuff offers a unique and insightful overview on the pressing matter of waste disposal,  another project named Trash | Track offers an insiders’ perspective on the potential that RFID-technology has to offer within cities and their urban environments, at large.  Through this small-scale project, executed by the Massachusetts Institute of Technology,  researchers unveil just how widespread and revealing waste streams can be.

In this case study, I will show that the Trash | Track project is as dynamic as can be and offers much potential for future endeavors regarding the waste streams behind our stuff. In other words, the travels our trash make and how this is intricately related to a new phenomenon called the Internet of Things.

In 2009 MIT developed the so-called Trash | Track project. Here, researchers attached RFID tags to electronic devices. In so doing, they offered a unique insight into the workings of the trash removal system. Through this project, performed at MIT’s SENSEable City Laboratory, the institute aims to raise awareness on the different roads that trash can make. Not only for companies and intistuttions interested in this subject, but especially also amongst citizens themselves.

This project marks a shift away from focusing on the supply chain of consumer products and instead puts an emphasis on the removal chain.

In the following picture one can see the inner workings of Trash | Track; 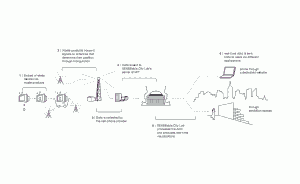 Over the course of three months, researchers tracked about 3,000 common pieces of garbage, mostly from Seattle, back to the waste disposal system.  In the table underneath it becomes clearer how the project tagged, traced and tracked the waste streams in the urban environment of Seattle and New York City. Throughout this process, researchers began to display the routes of these waste streams in real time on the Internet. This led to the following data visualization; 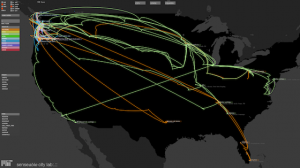 Upon analysis, about 75% of the waste tracked reached the recycling facilities. According to researchers, a value that was significantly above the average in the USA. In addition, an overall 95% of the tagged trash reached an stayed within the vicinity of the Seattle metropolitan area. This says much about the effectiveness of the municipal waste removal system in Seattle.  A remarkable conclusion was that electronic and household hazardous waste, transported to specialised recycling and reuse facilities in other states of the USA, on average  would travel more than 1,500 km (MIT; 2009).

It becomes clear that the crucial piece of technology within this project is the use of the RFID chip. Radio Frequency Identification (RFID) has existed since the World War II and been implemented in countless products on a world wide scale. Many companies favor this technology as it allows them to trace their products from supply chain to the shop itself. The chip allows for products to receive a unique, individual, identification and precise determination of a products’ location. However, the benefits do not only apply to companies. RFID or wireless technology  also gives people endless opportunities to create a ‘clever network’ of objects. Intriguingly through the use of chips, objects get a life of their own. Researchers now speak of this new paradigm as the Internet of Things.

As a concept, the Internet of Things alludes to the idea that low-powered microprocessors and sensors, embedded in products like your coffeecup, can feed real-time data into datacenters. Upon which this data enables companies and various institutions to analyse and visualize the various waste streams that a coffeecup undergoes as it is transported to the waste dump. According to Wired, analysing the Internet of Things and in general, the uses of RFID-tagged objects through ubiquitous computing leads to the following conclusions;

The advantages that the Internet of Things has to offer are multiple. For a start, it can optimize the process of waste disposal. It will allow cities and their governments to start saving some of our euros as it makes their waste disposal system more efficient through these new sensors and data. Even better, taking these factors into account, it improves our quality of life and raises awareness as our waste streams are visualized, right under our eyes. Juxtaposedly, there are some challenging obstacles to RFID microchip-technology.  Though it is indeed efficient, it is at the same time a type of technology that can be regarded as pervasive and salient. Some of the critiques given to the Internet of Things is that it presents an endangered sense of privacy and lack of security.

Waste is momentarily one of the most critical global, regional and national issues of the twenty-first century. Yet, Trash | Track raise awareness not only amongst companies and institutions  but also consumers. By tagging, tracking and tracing the waste stream of trash, we now understand much more about the layers of complexities hidden in our waste streams. Though it remains to demarcate the boundaries of RFID technology, this project shows that in terms of tracking our trash, the benefits outweigh the risks and obstacles.

Santucci, Gérald. ‘From Internet of Data to Internet of Things.’ Paper for the International Conference on Future Trends of the Internet. 28 January 2009.

See also Google TechTalk of Bruce Sterling, made in 2007: http://www.youtube.com/watch?v=snDO3ClgRTA
and his Sterling’s blog for more information: http://www.wired.com/beyond_the_beyond/