About Charlotte
My name is Charlotte and I'm a master student New Media and Digital Culture at the University of Amserdam. After graduating with a bachelor's degree in Psychology at the University of Amsterdam, I did a pre-master year New Media and Digital Culture. I have a passion for everything related to digital media, creativity and design. Having a background in psychology, I'm interested in the social and behavioral aspects of new media as well. My particular research interests are in data visualization, the relation between new media, data and journalism and the social consequences of new media.

Since the rise of web 2.0 and social media, companies and brands have altered their strategies and jumped into the opportunities that grew with this new digital era. New ways of advertisement and campaigning have found their way to the Internet and it’s users. This has brought with it a new form of surveillance: consumer surveillance. Hereby the focus is on monitoring consumer’s behaviour, mostly with commercial purposes in mind. Turow speaks in his book Niche Envy: Marketing Discrimination in the Digital Age about ‘the internet as test bed’, since new media means an exploration of possibilities and borders – especially in the context of consumer surveillance – of marketing in the digital age (Turow, 83). The drastic change here is that online advertisement has created a shift from anonymous and invisible consumers to active and visible consumers. No longer are consumers passive spectators of ads; now they are actively involved in online campaigns and branding. This means that companies now have access to personal information and profiles of consumers. With this information, ‘databodies’ are generated that contain specific information about consumers interests, preferences and characteristics (Rogers, Consumer Technology after Surveillance Theory). In this way, companies can involve in online branding activities adapted to their consumers group of interest. Also, online branding makes it possible for companies and consumers to interact and communicate with each other, in this way getting to know each other’s desires and intentions.

I’ve chosen to focus on two worldwide well-known and big flight operator companies, namely KLM Royal Dutch Airlines and the American company United Airlines. KLM Royal Dutch Airlines is known en praised for it’s active involvement in new media strategies. United Airlines uses social media too, but isn’t so well known for it or credited as KLM. The image below shows some search results for “united airlines” and “social media”, which seems not too positive. Based on this information, I would expect KLM to be more popular on social media and in Google searches in comparison to United Airlines. 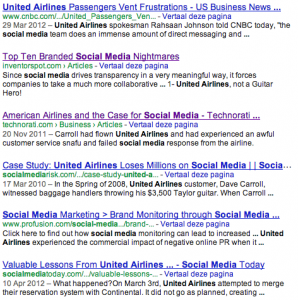 Facebook
Both companies have a Facebook page. KLM has a ‘global’ page and several pages per country. KLM makes use of different features and applications on their page, such as the iFly Magazine, the KLM Trip Planner and the KLM Passport app. KLM post daily messages or photos on their wall, to communicate with their ‘fans’ or to keep them interested. United Airlines has one page and also posts messages and photos on a daily base. However, there can be no extra features or applications found on the page.

Twitter
Both KLM and United Airlines have daily tweets, mostly with the purpose of informing their followers or to interact by them through questions and contests. There seems not to be a significant difference between the two companies in terms of activity on their Twitter accounts.

LinkedIn
While KLM uses LinkedIn for several more general purposes, such as linking to their other social media channels and providing information about careers and employees, United Airlines is more actively focused on posting job vacancies to attract new employees.

YouTube
When comparing the YouTube channels for both companies, it’s notable that KLM is more active on YouTube in terms of the amount of videos and (themed) playlists. The channel of United Airlines contains just a few videos.

Instagram
Also on Instagram KLM can be considered as more active compared to United Airlines. KLM has posted 185 photos and owns a Pro account, while United Airlines has only posted 31 photos.

Apps
Lastly, both airline companies have apps available for smartphones and/or tablets, which can be found in the app stores of these devices. KLM holds several apps, ranging from booking flights to more fun interactive apps with information on the company. United Airlines has one app which mainly focuses on booking flights.

Beside these social media platforms, KLM holds a few other channels: it has an official Hyves page, an social media network in the Netherlands, with 94.415 fans; there is a Pinterest page with several pinboards on it which has 605 followers; there is a blog on the website; and lastly, this October KLM introduced Flynn, an animated character and a sort of mascot of KLM. Flynt answers questions of costumers and shares his stories on the company in an attempt to give KLM more personality.

KLM also has had some contests and campaigns through social media. For example, there has been a campaign whereby some travelers got a visit of the ‘KLM surprise team‘ when they checked in on a KLM lounge at an airport via Foursquare of Twitter. Another example is ‘Meet & Seat‘. Here, travelers can share their Facebook or LinkedIn profile when they’ve booked a flight and take a look at the profiles of their fellow travelers. In this way, they can pick a seat next to someone of their own choice. United Airlines also had organized an check-in campaign, whereby travelers who checked in at United Airlines spots via Foursquare of Facebook earned ‘miles’. Then, travelers had the possibility to swap these miles for travel, hotel and car rental and other purchases and activities.

Based on this information on the online activity of KLM and United Airlines, it seems that KLM is more active involved in branding through social media. This creates the expectation that KLM has more followers on their social media channels. The following self-generated graph compares the online popularity of KLM to United Airlines in means of followers, subscribers or fans.

Surprisingly, more searches were on United Airlines and this is against my expectations. In the conclusion I will go in more depth into the results of this analysis.

With this analytic blogpost, my attempt was to gain some insight into the effects of online branding strategies through social media on online popularity. A comparison of different social media platforms of two airline companies, KLM and United Airlines, showed that more online activity results in more followers and thus more popularity. However, Google Insights for Search did not support this finding. A possible explanation could be that since KLM is already so well presented online, people don’t search so much on the company but instead go directly to their site or one of their social media channels.

Although I only compared two companies and a lot of other factors could have been of influence in this analysis, such as possible news rapports on the companies which influence the searches on Google, I think this analysis is a good starting point in approaching and researching online branding strategies and online popularity. KLM definitely takes advantage of the consumer surveillance era, by communicating with and approaching costumers in an active way and respond to their needs and to the new possibilities social media have created. KLM can be considered very creative in the field of social media, and this definitely helps them in gaining popularity amongst consumers. Hopefully United Airlines and other companies take notes on this and put some effort in effective online branding strategies.