“Worst Nobel Prize ever”? Comparing English and Dutch responses to the Nobel Peace Prize for the European Union on Twitter and Google News

About Lucas Reehorst
I study Media Studies (research master) at the University of Amsterdam. In 2010 I finished a BA in Media & Culture and in the summer of 2012 I received a master's degree in History: American Studies. An interest in the efforts of the Digital Methods Initiative has brought me here (to New Media at the UvA). Other research interests include metaphor, editorial cartoons, medium specificity and media history.

Last week’s announcement that the European Union has been awarded this year’s Nobel Peace Prize has spurred a host of comments in both traditional and online media. Many critics decried the timing of the award committee, which they considered inopportune in light of the financial crisis that plagues Europe, or were critical about the apparent overlooking of the wars in the former Yugoslavia or European participation in wars in the Middle East, while others praised the Nobel Peace Prize committee’s as a healthy reminder of the Union’s achievements in a difficult time or a well deserved recognition of the contribution of the European Union and its predecessors to peace.

In this post I will explore the reactions to the news that the EU had been given this award expressed on twitter and in articles indexed by Google News in an effort to chart the differences between what might be called the Twittersphere and the newssphere. Moreover in an effort to find out whether the same role is fulfilled by these two spheres in different national contexts, I have examined Dutch as well as English tweets and articles indexed by three national versions of Google News: those for the U.K., the U.S. and the Netherlands.

My approach takes after earlier attempts at cross-spherical analysis such as the Digital Methods Initiative’s Issue Animal Analysis project and Cacciatore et al.’s (2012) comparison of the coverage of nanotechnology related news on blogs and news articles (as indexed by Google Blog Search and Google News), in that I have allowed digital devices (i.e. Twitter and Google News) to the demarcate the spheres I’m set to examine.

The data on which my analysis is based consists of three sets of 200 tweets from October 12 (the day that the news that the E.U. had won the award was announced) to October 14, and three sets of entries of articles on the award indexed by different national versions of Google News (those for the U.S., U.K., and the Netherlands). The tweets were scraped with the Digital Methods Initiative’s Twitter Scraper, while the Google News results were captured manually with the Firefox add-on Zotero. In an effort to minimize the extent to which my results were influenced by personalization I made use of a research-browser and made sure I was not logged in on a Google account, when I entered my queries into Google News.

My analysis took the form a somewhat superficial form of content analysis, based on the content of the tweets and the titles and short descriptions of the news articles, wherein all tweets and articles where coded either as:

1. positive, if the content (a) was itself positive about the award for the E.U. or (b) referred to a positive reaction
e.g.: (a) “Brilliant, inspired, flabbergasting, enlightened, wonderful, elating and visionary choice: the #EU gets the #Nobel Prize for Peace”
(b) “The Washington Post gives an analysis of why the EU deserves the #Noblepeaceprize http://t.co/RRsSYPry #EU”

2. negative, if the content (a) was itself negative or (b) referred to a negative reaction,
e.g.: (a) “Wow the Nobel Peace Prize club has really gone downhill. Kissinger, Obama now the EU? #fail”
(b) “Greece shocked at EU peace prize amid economic ‘war’ – http://t.co/G2lC65nW”

3. nuanced, if the content (a) mentioned ambivalent feelings about the award or (b) expressed both positive and negative feelings towards the award
e.g.: (a) “#Vandaag een #PRIJS #gewonen, #nobelprijs, alle #europeanen ik heb hier wel een #dubbelgevoel van. Whaa. #Europa #nl #nederland” [dubbelgevoeld translates as mixed feelings, LR]
(b) “67 jaar vrede in Europa: een Nobelprijs waard. Ik weet alleen niet of ze ons exportproduct vrede ook waarderen in Irak en Afghanistan. #eu” [my translation: 67 years of peace in Europe, worthy of a Nobel Prize. But I do not know if they also appreciate our export, peace, in Iraq and Afghanistan]

4. indicative of controversy, if the content made mention of controversy or multiple contrary opinions about the award
e.g.: “European Union’s Nobel peace prize win treated with joy and derision”

7. other, if none of the categories listed above applied

The results of this little exercise can be seen in the table below:

Now let us briefly turn towards the grand total of 228 out of 600 (i.e. 38% of the Tweets in the three samples) that ended up in the “other” category. Most of these Tweets were jokes, either about the fact that Europe can make good use of the money attached to the Nobel Prize (in light of the economic crisis), the fact that this money adds up to little if divided among all the citizens, the fact that all citizens had won a Nobel Prize and could add it to their CV, and the ‘news’ report that there exists a strong correlation between the amount of chocolate eaten in a country and the number of Nobel Prize laureates it has brought forth. Another genre of tweets consisted of suggestions either for candidates for the peace prize (with Malala Yousufzai the most popular among the suggestions) or for worthy recipients of the award (with children from all member states and Helmut Kohl among the more popular suggestions).

Considering the small size of the samples, and the fact that the statistical differences discussed above often were rather minor, it would not be wise to reach far-reaching conclusions on the basis of the research presented here. After looking at the tweets here and a number of political cartoons on the subject (see below), it is tempting to conclude that Twitter responses to the news are fairly similar to the responses of cartoonists, as both are characterized by a prevalence of criticism and humor, and because many of the same jokes are made by twitter users and cartoonists.

Compare, for example, these tweets:

With the following cartoons: 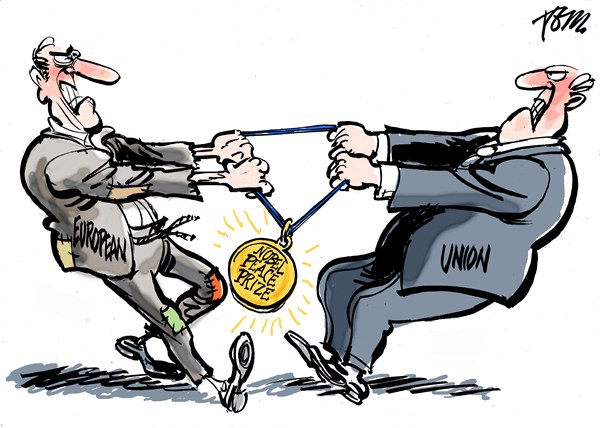 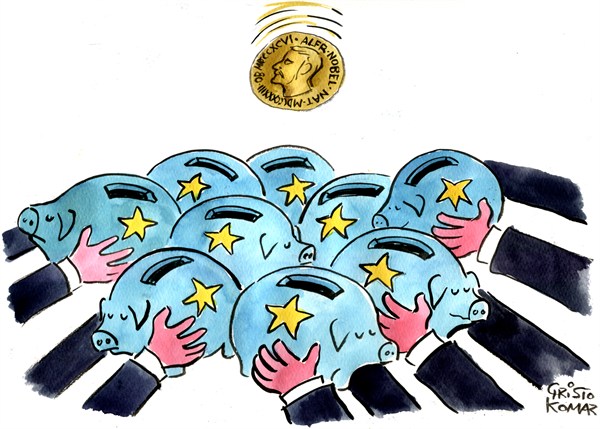 Fig. 4 – Chappatte – ‘We Would Rather Have Received the Nobel for Economy’ © Chappatte in “Le Temps” (Geneva)