Really that Bad? A case study on the fifth best-selling album of all time

The Atlantic recently published a stimulating critique in which music journalist John Murph questions the real legacy of Michael Jackson’s seventh and hailed studio album Bad. “If we compare the three albums Quincy Jones produced for Michael Jackson to the standard Hollywood movie trilogy, how should we view Jackson’s 1987 LP, Bad?” John Murph asks. Was it a grand finale, like George Lucas’ Return of the Jedi, or did it fail to meet the high expectations, like the Wachowskis’ sequels to The Matrix? “After having the luxury of 25 years to re-evaluate the impact and enduring power of Bad in relation to his previous two LPs, I’d argue the album is more Wachowskis than Lucas.” Bad, the album that had produced five consecutive no. 1 hits and became the fifth best-selling LP of all time, “inevitably disappointed.”

Not having the sales-figures on his side, the reason why Murph playfully argues that “Bad wasn’t that good” is that its real impact is structurally overestimated. The present case study sets out to examine the various claims that make up this argument. Following Richard Rogers’ assertion that “the Internet may be rethought as a source of data about society and culture,” this study makes its own attempt at trying to determine the cultural significance of Bad by collecting different types of data from different kinds of sources.

When you assess Murph’s critique with the same degree of scepticism with which Murph himself reflects on Bad, it must be said that most of his claims are unfounded. By and large, Murph’s argument is based on his own, overall impression of 25 years of Bad and the singles that came with it. By consulting Amazon’s sales-rankings, Spotify’s and iTunes’ popularity indications, and the listening statistics found on Last.fm, this case study will try to empirically verify the different claims about Bad. Going back and forth between the critique and the empirical data found online, this study follows up on Murph by asking if the finale of the lauded Jones-Jackson tandem was really that bad. 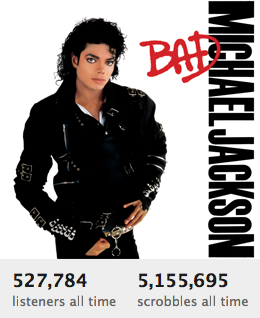 A central claim in Murph’s critique is that Bad was not able to surpass “the magic of Thriller.” This is true in almost every statistical sense. All platforms but Spotify indicate that Thriller is indeed better-liked than Bad. Last.fm is the only platform that is willing to go beyond rankings. Their listening statistics show that, in practice, Thriller is listened-to only 20 percent more than its “disappointing” successor. And while Thriller’s 830,000 listeners on Last.fm are indeed a fraction of the album’s total listeners, the available sample suggests that effective reach of Thriller was not three to six times higher than Bad, as most sales estimates lead to belief. Likewise, it should be noted that Bad is still Jackson’s second most-popular album on Last.fm, having 61 percent more listeners than no. 3 Dangerous. 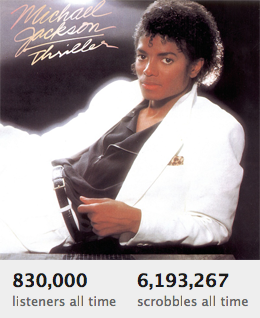 ‘Other hits are better-liked’

A more specific claim concerns the “listless pop confection” “I Just Can’t Stop Loving You.” While Murph acknowledges that the single was the first of five to reach no. 1, “it never shared the heavy rotation of some of Jackson’s other hits.” The data from Spotify and Last.fm confirm this claim. The ballad is best-liked on Last.fm, but here ranks no higher than #21 in terms of scrobbles. The graph below, which shows the distribution of scrobbles for Jackson’s most-listened tracks, verifies that “Jackson’s other hits” are indeed more popular, on average getting 2.2 times more plays.

In terms of popularity, Jackson’s ballad holds spot #28 on Spotify. But while it is not precisely clear where Spotify bases these indications on, it should be noted that the song still scores 59/100. This suggests that the ballad is only 23.7 percent less popular than Jackson’s top track, which has an absolute score of ’73’. However, while it should be stressed that sales-figures do not reflect rotation, the rankings found on Amazon and iTunes do little to suggest that Murph was wrong after all. Here, “I Just Can’t Stop Loving You” respectively ranks 118 out of 711 and 59 out of 889.

“Had Bad come out only a year or two after Thriller,” Murph continues his critique, “[then] the obvious redundancies probably could have been chalked up as an artist building upon proven strengths. But five years and eight Grammy awards later, those songs sound calculated and corporate-minded.” Murph here refers to “Bad” and “Dirty Diana,” and argues that both songs can’t match the spectacle and superiority of “Beat It” and “Billy Jean”. While this in essence is a personal conviction, Murph has the data to back up his claim. “Beat It” and “Billy Jean” are amongst the four most-popular tracks on every platform. The hit-singles from Bad, on the other hand, rank anywhere from #7 on Last.fm to #28 on Amazon.

‘Many songs are hardly played anymore’

Despite being released as singles, songs like “Liberian Girl,” “Speed Demon,” and “Another Part of Me” all failed to maintain their momentum, Murph writes in the concluding section of his critique. “[And] does anymore remember his duet with Stevie Wonder on “Just Good Friends?” Only 91 thousand Last.fm users can reply affirmatively – in contrast with the one million listeners “Billy Jean” has. Leaving little doubt, the “high-priced” collaboration with Stevie Wonder ranks last on every platform. Concerning the popularity of the tracks: “Speed Demon” currently ranks #115 on iTunes, “Another Part of Me” #60 on Spotify, and “Liberian Girl” does not even make Amazon’s top 300. As the rankings from the different platforms make evident, the four tracks Murph deems as the album’s worst songs are also statistically the weakest songs. Concluding his statistical streak, the three tracks that Murph singles-out as the album’s “finest tunes” are indeed the highest-ranked songs found on Bad.

Not that bad after all

While it is statistically true that “Bad falters as a successor to Thriller,” its cultural impact is still manifest. On both Amazon and iTunes, five out of the eleven songs are in the overall top 25. On Last.fm, Bad accounts for one in five Michael Jackson-scrobbles and fathers five of his ten most-listened songs. More significant, perhaps, is that when Jackson died in 2009, four tracks from Bad were part of Last.fm’s global top ten (which also included three tracks from Thriller that week). Finally, having also three top-ten songs on Spotify, Bad can hardly be said to have “disappointed.” Juxtaposing albums to Thriller might just be a bad comparison.