Lomography is the modern term for the type of film photographs taken with analog, simple cameras, initially produced by Lomo PLC in Sankt Petersburg in the ‘80s. In 1991, two students from Austria discovered a compact enigmatic camera which allowed the two to develop a creative, experimental style, by using the cheapest resources available. This resulted in unusual, dreamy and authentic photographs, strangely unfamiliar for that period. The camera was called Lomo Kompakt Automat, used 35mm film and, at the time, was distributed exclusively in URSS. The camera was, in fact, a Russian copy of a Japanese model, Cosina, and produced blurry images with vivid colors, always different, because of the light leaks and the cheap plastic lens. But precisely these “flaws” made it popular and appreciated by those two students, who, wanting to spread their discovery to others, went to St. Petersburg to try and sign a contract to become worldwide distributors of the Lomo PLC . The Russians realized the potential of the little plastic camera, so they agreed that it would be produced on a large scale. 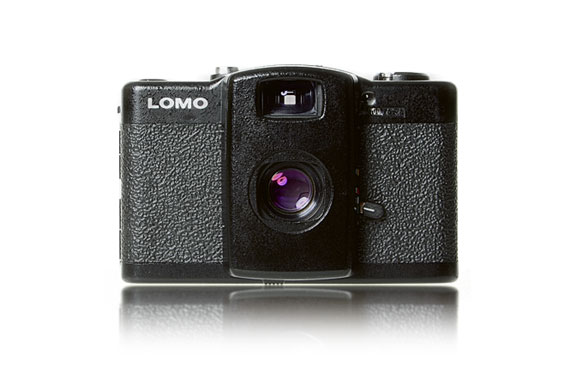 This is how the Lomography brand was born, which soon became the sole distributor worldwide. What started spontaneously in Vienna, as a new artistic experiment in photography, quickly developed into a social-cultural movement, internationally. This development was supported by the multitude of marketing products that started coming out: exclusive cameras, accessories, books and magazines. Moreover, The Lomographic Society started having a lot of activities in over 35 countries: exhibitions, dedicated events, projects and parties. The Lomography phenomenon was, thus, started, and had a strong influence upon the ‘90s photographic art style.

Later, when internet access began to be available on a large scale, this trend became extremely popular, counting almost two million members globally, nowadays, according to the official website. Among Lomography fans there are also celebrities like Brian Eno, Laurie Anderson, David Byrne, Pulp, Underworld, Helmut Lang, Moby, Robert Redford and many others. 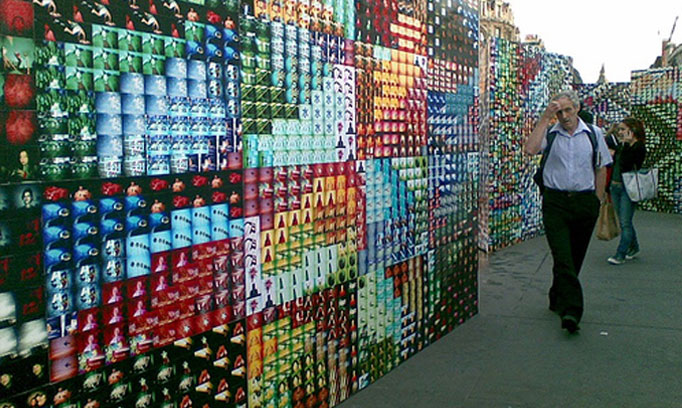 The main idea of lomography is “be fast, don’t miss the moment by calculating the possibilities”. Thus, a set of 10 rules was created for aspiring Lomographs, called “Don’t think, just shoot”. These rules incorporate “commands” such as “Take your camera everywhere you go”, “Use it any time, day and night”, “Shoot from the hip”, “Don’t think, be fast!” and, of course, “Don’t worry about any rules”.

We can compare this set of ten rules with the ten Kodak rules, to show the difference. The ten Kodak rules are a set of technical instructions that recommends the amateur photographer to mind the shutter speed, depth of field, filters, flash, composition and to choose the right kind of film. These Kodak rules represent the exact idea of popular photography done right, based strictly on technique. In contrast, we could argue that Lomography comes to mock these rules, because the “Lomo style” contradicts them and also contradicts its own set of rules, in the end. So, instead of planning a composition, Lomographers think that this is something that should come naturally, so they shoot at any angle and in any position, even without looking through the viewfinder.

On the list of photography genres on Kodak’s website, Lomography is one of the “problematic images” – blurry, unclear, unusual. These exact so called problematic images are the reason why sometimes professional laboratories refuse to develop the whole film, thinking that a good part of it is simply a case of bad results.

Since the start of the Lomography brand, there have been introduced a large number of other cameras, aside from the famous LC-A, each having a unique feature. 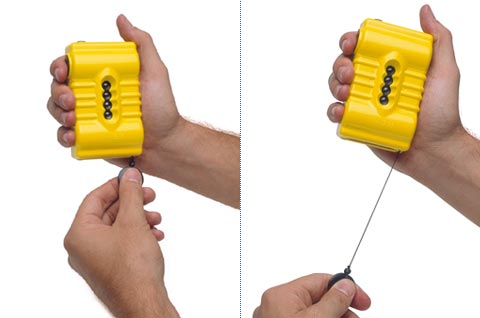 To analyze Lomography, we should go back to Karl Steinorth’s definition of the snapshot, of which he claims that is made by an amateur photographer with a simple camera. Spontaneous photographs (snapshots) were initially associated with short exposures and, after 1880, were given the definition by Steinorth. In 1888, George Eastman popularized the Kodak camera on the market, the ancestor of snapshot cameras.

The advertising campaign “You press the button, we do the rest” shows exactly the lack of effort needed to take the photograph. From that moment on, people could take photographs themselves, without having the need for a studio. This was the start of big scale snapshots and family photographs. Initially, these cameras were destined to children and women, because there was no need for technical knowledge, only the press of a button. 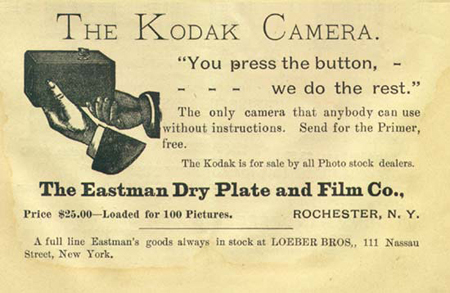 The famous photographer Henri Cartier-Bresson reinvented the status of simple, honest photography. He often used to hide in the dark, on the street, and waited patiently to capture natural, authentic images. His talent of anticipation produced many exceptional works. As for amateur photographers, generally speaking, the difference between them and professionals is, basically, that amateurs don’t earn any money from photography, or don’t have a paid job that involves photography. Some passionate amateur photographers sometimes have the equipment of a professional, even if it’s just a hobby for them.

Lomographers are usually very passionate people that capture snapshots with their small cameras that they carry around everywhere. Speaking about snapshots, Bourdieu once said that “photographs can’t tell us every time why people in them are laughing, but it’s clear that they had a good time.”

Technological progress is often regarded as being linear, with new technologies always replacing the old ones. In the new media, we can clearly notice the popularization of digital photography versus the classic one, during the last decade. I will try to look upon the motivations that determine the use of old technology in a modern world. This study explores the non-linear characteristic of technology, regarding Lomography as a main focus, but will also try to explain the conditions in which classic photography is still viable. The status of being a social movement could very well maintain the survival of such a medium – Lomography – which is already that, upon some claims.

Besides unusual images, blurry and flawed, Lomography differentiates itself from classic photography by medium and results. Conventional photography implies a progressive learning of the camera, through its settings and options that it features. The photographer has, therefore, the possibility to control the quantity of light that goes through the lens, by manipulating the aperture and shutter settings.

In contrast, Lomography cameras have no such settings or just minimalistic ones, and the act of photographing is usually just about pressing the button, eliminating the process of learning or getting used to. Moreover, classic cameras use glass lens with various optical properties, to obtain sharp images, while the lens of Lomographic cameras are made of plastic, not only because this is what keeps the price low, but also because it contributes to the well-known results. 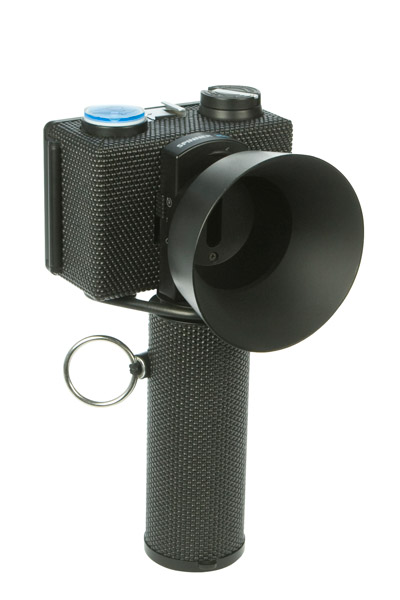 A lot of Lomography photographs are blurry simply because there is a lack of setting to obtain a crisp, sharp image. Not only that, but some of these cameras can focus only by letting the photographer guess how many meters are between him and the subject and set the indications accordingly, on the lens. Bad optics and poor construction is also why lomographs are oversaturated. Because of the poor sealing of the camera’s body, sometimes there can be light leaks or vignetting.

Demographics. The camera. The results.

2290 respondents participated at the online survey conducted by Lomography in 2008, named “Analogue vs Digital 2008”. Demographics show that the “Lomographic Society” is composed almost equally by men and women. Most of them are aged 15 to 30 years (70%), 59% of them having a higher education degree and 42% having a job in a creative industry. Results showed that 38% of Lomographers think that their lifestyle is based more on digital than analogue.

Extensive analysis shows that the camera is the center of photography, therefore it is the most important factor in understanding photography. Mark Sink, a famous american photographer, declared in 2008 that “It’s all about the camera. Although the photographer is important, the fact that museums keep mostly old cameras and not photographs confirms it”.

In the Lomography world, Allan Detrich is the biggest collector of Lomo cameras and their clones. He says that he loves their simplicity and the astounding results that he gets. Tony Lim, another passionate lomographer, declares that there are no identical two Lomo cameras and that each of them manages to amazes the user through the results obtained.

On the other hand, critics of the medium say that photographers should always carry a certain art sense. The mechanical and electronic way of obtaining photographs has lately eliminated the human interaction factor. Many photographers believe that the analysis of the camera is insufficient, because photography is a mimetic art. In other words, the camera isn’t able to capture the image the same as the human eye. There will always be differences between what we see and what we get on camera, in terms of color, tones etc. Lomography is different from digital and analogue photography because it tries to reduce the camera factor and focus more on creating the image. This is exemplified by the 10 golden rules of Lomography.

The rebirth of analogue photography through Lomography is an amazing phenomenon which has recently been in the public eye because of certain factors which I have discussed in this study. Thus, Lomography represents a good example against the supposed linearity of technology evolution. From a marketing perspective, the makers of digital cameras can learn an important lesson from the Lomographic world and can look for new elements which can integrate that fun factor in the act of photographing, especially for hobbyists.

The two students who rediscovered Lomo and transformed it into a global phenomenon are now two wealthy businessmen. Lomography is now an international commercial organization which sells simple compact overpriced cameras. In fact, Lomography doesn’t sell cameras, but concepts, ideas, a lifestyle, and this certainly accounts for a big part of the price.