The experience of wirelessness: A short film


Up until a mere two decades ago, the possibility of receiving e-mail and checking status-updates on Facebook while being on the train, bus or even on the street might have seemed like a science fiction scenario. The Wireless-Fidelity makes its presence felt: cellphones capable of being used as modems while on the go, wireless headphones, game consoles, keyboards, computer mouse and Wi-Fi access points in every corner of every street are part of a new reality. We have come from being physically attached to wires, to not being able to perceive the existence of connectivity. 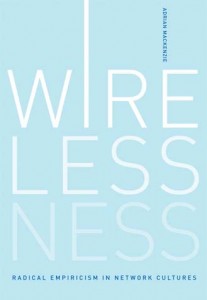 According to MacKenzie, “the promise of wireless access to the Internet sometimes shrivels to an impassive demand for connectivity” (3). It has changed society and people’s habits. In his book ‘Wirelessness”, MacKenzie focuses on the experience of wirelessness in an attempt to explain these changes in society and the need for wireless devices and instant connectivity. He frames this notion of ‘experiencing wirelessness’ in William James’s century old philosophical theory of radical empiricism. This theory stresses the importance of experience together with the connections and disconnections that it contains.  So what exactly is wirelessness? MacKenzie claims it is an illustration of a diverging and converging set of tendencies, related to network connection. In short, “wirelessness affects how people arrive, depart and inhabit places, how they relate to others, and indeed, how they embody change” (5). The suffix “ness” includes all these tendencies of vague feelings and the state of being wireless. “Less” on the other side, captures the forthcoming changes and promises of wireless that there will be more of less: less wires, less boundaries and less obstacles (MacKenzie 5).

What James and MacKenzie have in common, is that they both want to bring relations of proximity, transition and movement back into the discussion of experience. It is not all about the endpoint of experiencing connectivity; it is about the ways in which wirelessness alters how transitions between places occur (MacKenzie 17). According to James, the continuity of the transition gives meaning to the experience, and allows it to flow free from abrupt changes (18). He argues that objects are always in movement and transition, and therefore always in the making (James 263). Experience occurs under different processes and simultaneously at different levels. In the same way, wirelessness is highly diffused in technology, politics, science, everyday life, as well as in institutions and organizations, affecting the way that transitions between them are taking place. This passing from one change to another gives meaning to any kind of experiences, and therefore to those emanating from wirelessness.

One specific part of James’s conjunctive relations claim that MacKenzie incorporated in chapter six of his book is that experience can also be divided into inner and outer aspects. This notion of inner or outer depends on its turn on the way a ‘thing’ acts on their neighbors and the shaping of relations between neighbors and the neighborhoods of relation (MacKenzie 148). For this, a sorting process of locations, things and figures is needed. To get a better comprehension of this somewhat abstract notion, we visualized the 6th chapter of the ‘Wirelessness’ book in a short film, using both self-captured video and content from Youtube. You can watch the short film below.

At first glance, the sorting of inner and outer seems like a complex theory. Especially since experience is a difficult concept to grasp in just words. Visualizing a theory can add value in that sense, which is why creating a short film was chosen for this project. This way, the intensity of the experience of things as inner or outer is best comprehended. However, we did not want to lose the abstractness of the way MacKenzie makes this claim in his chapter. It represents the feeling of the entire book, which is why we chose to incorporate literal passages of the text in the film. In the final part of the short film we emphasize the frustration that exists in today’s society when the flow of connectivity is interrupted. MacKenzie does imply this frustration in his book, but does not emphasize it. We however think this is an interesting part of wirelessness, because for a moment people realize that they are connected to a ‘thing’ and that it is not self-evident. When this happens, the obvious next step is to check or change the Wi-Fi connection. When the connection is restored, the cycle of experiencing wirelessness will continue like it never happened.

Wirelessness is embedded in today’s society, but also infused in the economic process. Each wireless device promises non-stop connectivity. This notion of connectivity might not at all times be perceived, but it does trigger entanglements and attachments to products and services (MacKenzie 167). People have a constant desire for data and are therefore in need of continuous transition. This submersion into wireless devices like smartphones, laptops, digital cameras or headphones is visible all around us. It does not only affect the way we experience different media or content, it also changes the way we experience life.