[Video] The Bias of (Online) Communication

Our task for the 2012 Wild Card Symposium was to bring theory to life, by explaining a book in a new, digital way.

In a merging of old and new media, we produced a short YouTube video to help explain the concepts of Harold Innis’ book The Bias of Communication. 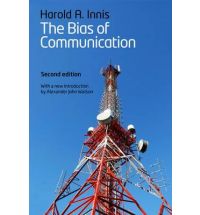 Originally published in 1951, The Bias is a collection of some of Innis’ essays on media and communication.

We originally chose the text for its position as a classic media theory text. Although we were quite unfamiliar with Innis’ body of work, we were happy to discover that he has been greatly associated with a more familiar theorist, Marshall McLuhan.

Instead of summarizing the text (which itself is a large collection of communication history), we aimed to explain some of its key concepts. We chose to illustrate monopolies of knowledge, and time and space bias. With an explanation of these concepts, the overarching concept the bias of communication can be better understood.

Since the text is quite old, it ends with only a discussion of newspapers, radio, and television as media. Because of this, we ended the video by exploring Innis’ work within the context of present-day media, and in particular, online communication. We discovered Innis’ concepts to be very relevant in new media today.