Now for Some Light Reading: A Bibliofile’s Review of the Sony PRS T2 e-reader 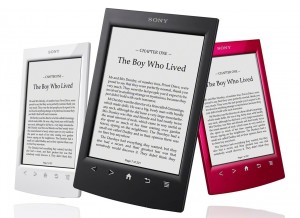 For a long time, I felt an aversion towards e-readers and electronic reading. How could reading from a screen ever top reading from paper? How could one simple, small device triumph over bookshelves crammed with beautiful books? Of course, I could see the advantages, like being able to carry all of your books with you at all times. But, I said to myself, why would I even want to do that? I’m sticking with what I know: this new e-reading thing isn’t for me.

Surely, I wasn’t alone in this reserved attitude. The first e-ink e-reader (also a Sony, the LIBRIé) was released onto the market in 2004. However, it wasn’t until 2010 that e-readers became more mainstream, with the introduction of the relatively affordable Kobo e-reader.[1] Today, e-reading finally takes up a significant part of the market, with over a fifth of the adult American population having read an e-book in 2012.[2] How can it be that it took the e-reader so long to finally be acknowledged by its potential users? Why wasn’t I willing to even try it in the first place?

When launching new technologies, one of the biggest challenges is to overcome consumer’s resistance to change. A scientific model for explaining this unwilling consumer attitude is the Technology Acceptance Model, or TAM, developed in 1989. According to this model, user acceptance can be enhanced by two beliefs: the belief that the innovation will help to perform a better job (perceived usefulness), and the belief that the benefits of usage outweigh the effort of using the application (perceived ease of use).[3]

The TAM has proven itself to be very useful in the past two decades of researching new technology adoption. However, it has been criticized for not taking into account any emotional or affective beliefs. The attitude towards the e-reader is believed to be influenced by both the utilitarian motives derived from the TAM, as well as hedonic motivations. A recent study has shown that hedonic motivations such as perceived enjoyment and congruence with self-image complement perceived usefulness when developing a favourable attitude toward e-readers.[4]

This study also found that reading enthousiasts “tend to perceive e-book readers as useless and do not automatically appreciate the benefits thereof, which hampers adoption”.[5] Sounds familiar, doesn’t it? If it wasn’t for my studies, I wouldn’t have made the decision to buy myself an e-reader. Why the Sony PRS T2? Because it scored best in a test by the biggest Dutch consumers union, de Consumentenbond.[6] If I would have to buy one, it should be the best there is.

So, the latest Sony e-reader (launched in october 2012) would have to convince me that e-reading really is an attractive alternative for print reading. Given my prior attitude though, it would have a hard job in doing so: I did believe that it would help me to perform a better job, but wasn’t so sure that its benefits would outweigh the effort of using the device. I didn’t think that e-reading would bring me any pleasure, either. Has the Sony PRS T2 been able to change a bibliofile’s mind?

What I really like about the PRS T2, is its design. I love the simple, clean shape of the device. The E Ink Pearl screen works great as well. When switching between pages, the screen flickers a bit, which takes some getting used to – but this is the case with all e-readers. For me, the E Ink screen definitely works better than an LCD screen. First and foremost, as studies have shown, LCD-lit screens are pretty tiring for the eyes.[7] Second, the E Ink creates the illusion of reading from actual paper in stead of from a screen, which of course for a bibliophile is appealing. 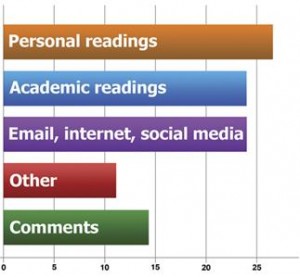 The PRS T2 is an easy to use, great looking gadget with a good, high contrast screen. As a recent study in user preferences for e-readers has shown, these are some of the features people found most important when using an e-reading device.[8] The ability to read PDFs is also on this list of features; however, this is where the PRS T2 has disappointed me. It is in fact able to read PDFs, but doesn’t work properly once you adjust the font size, which is mostly too small to read. I’m pretty fed up with this, since I specifically bought my e-reader for academic reading – and many others with me, as the image alongside shows (how people use their e-reading device, derived from the above named study).

All in all, my reading experiences with the Sony PRS T2 have persuaded me that e-reading could in fact be something for me. Especially for academic use, with all the required reading, an e-book is a pretty attractive alternative to the paperwork a student acquires – and often loses. However, I don’t think the current e-readers, and the Sony PRS T2 in particular, is fit for using in this way. I feel like I’ve spent €140 on something that’s still in the development phase. Excellent for e-books, but falling short in the extra’s (which in my opinion really are the reason you would buy an e-reader anyway). Help us perform a better job, Sony! I’ll be waiting.