Coinciding with the release of Amazon’s Kindle Fire in 2011-12 (depending on your location), The global corporation also announced their ‘next generation’ ebook format, KF8, and their first attempt to step away from their now dated Mobi format.

Pitched as next generation thanks to its ability to compete with the ePUB3 interactive books format employed by Apple, The Global Indie Author had this to say of its new capabilities:

To let Amazon do the talking once again, their announcement last year indicated the new capabilities of the file format, and how they would look on a Kindle Fire, the only device supported at the time of release: 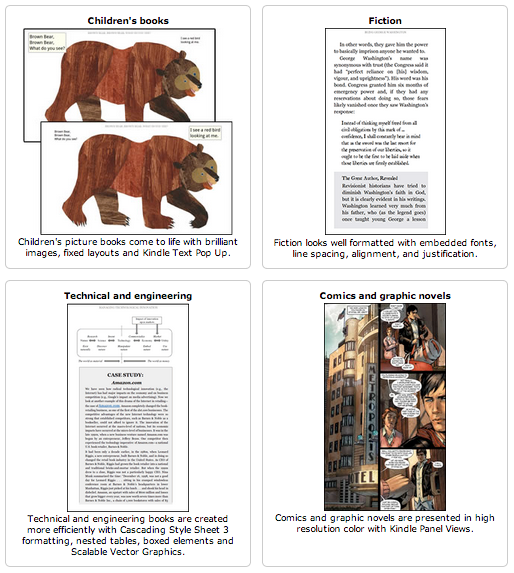 Interesting from the perspectives of their prospective authors and publishers, is the notion of backwards compatibility. Or rather, it’s lack. Nine months after release, Amazon managed to finally get round to adding Kindle Format 8 support to the Mac / iOS and PC applications. Users with older Kindles, or even just other Kindles (considering Amazon are still selling e-ink alternatives to the Fire), have not been so lucky. It is here that we hit our first problem. When sending your book to Kindle Direct Publishing Amazon creates two files on your behalf, those using the latest generation Kindle such as the Fire will receive the KF8 file (a long with your exciting new formatting thanks to its enhanced capabilities); all other uses will receive the older Mobi 7 format. Amazon takes the liberty of erasing all formatting carried out specific to the KF8 file type in this instance, with disappointing results.

So what does this mean? Firstly, Amazon has decided to venture down the path of platform fragmentation. We now have four generations of Kindle devices with three different levels of capabilities. According to author, publisher, and programmer Guido Henkel, there was no need for such differentiaton:

From a programming standpoint none of the features introduced in KF8 are in any way supercharged capabilities that require special hardware. Let’s face it. eBook reader software is, in effect, nothing more than a specialized web browser. It is not rocket science! … Web browser implementations have been written a thousand times … There are reference implementations out there that they could have used for free, all things that should have made it possible to retain a unified platform.

Not only has Amazon neglected many of its long-term Kindle users, but it has made things at least twice as complicated for its publishers, who will now have to ensure their books are formatted to a variety of different standards (KF8 for Kindle Fire, AZW3 for Kindle Paperwhite, AZW for older Kindles). Such a move by Amazon leaves me wondering if the corporation has failed to learn from lessons of the past. As Galloway discusses in his chapter of ‘New Media Old Media’, by Chun & Keenan, in order to guarantee ‘radically distributed communications between autonomous entities’ — or, in order to become the industry standard — ‘[one] must employ a strategy of universalization, and of homogeneity. It must be anti-diversity. It must promote standardization in order to enable openness’ (2006, 196). Considering Amazon initially sold its Kindle Fire at a loss, the evidence was there to suggest that the corporation relies heavily on the sale of Kindle content to turn a profit (within this market, at least). Accordingly, they can be excused (to some extent) for wishing to maintain a tight-grip on the purchasing power of its content-consumers. But to continually damage the potential universality and homogeneity seen within their own ‘family’ of readers (their words, not mine) with poor backwards compatibility seems ignorant.

Let us consider our own ‘family of readers’. Amazon allows you to link up to 6 Kindles, in whatever form, to one account. It is likely that any family blessed with 6 kindle devices are not likely to all be sporting the Kindle Fire. Instead of being rewarded for their loyalty to Amazon, they are penalised for not maintaining a cohort of KF8 compatible devices! Contrast that with the EPUB 3 format, which supports backwards compatibility through file-type (the same file can contain both EPUB 3 and 2 metadata), as well as software updates which will bring many 2.0 ebook readers to 3.0 capabilities, and we can see signs of the ‘universality’ that Amazon has chosen to neglect.