Written to be Read: How Elsevier was Stopped from Impoverishing Academia


Imagine: you’re looking for some background literature on your thesis subject in an online academic database. Browsing a multidisciplinary scholarly archive, that allows you to search through several academic archives and journals all at once (like JSTOR or EBSCO Academic Search Complete), you find exactly the kind of article you were looking for. You click on the title of the article, only to find that it isn’t available. Sure, it’s online, but not for you to access. Sounds familiar? In four years of being a student, I’ve been there. Several times. But what if I told you it doesn’t have to be like this?

As university students, we have the possibility of entering all sorts of online academic databases, but not all: only the ones that our specific university has subscribed to. We’re privileged in being able to do so; people who aren’t associated with the scholarly world don’t have access to these sources of knowledge at all (unless they are willing to pay the very high subscription fee, that even university libraries have trouble coming up with). Shutting off these academic databases seems weird when you consider the nature of academic research: broadening and spreading knowledge.

So how come this knowledge is put away behind (virtual) barriers? According to critical and cultural theorist Gary Hall, this is to blame on the ‘neoliberal turn’ in higher education. Today, we live in a ‘knowledge economy’, in which knowledge and its successful commercial exploitation is held to be the key to a society’s success. This causes universities to ‘marketize’ and ‘managerialize’, and has its implications for academic publishing as well: universities and academic publishers act as for-profit businesses rather than not-for-profit institutions.[1] Nowadays, knowledge is more than ever an expensive economic good.

Of course, this marketization and managerialization of the academic world has encountered resistance. The A2K (Access to Knowledge) movement, founded in 1990, stands for ‘creating more equitable public access to the products of human culture and learning’.[2] A2K promotes open access, which was defined in the first Budapest Open Access Initiative (2001) as follows:

‘the free availability of peer-reviewed literature on the public internet, permitting any user to read, download, copy, distribute, print, search, or link to the full texts of the articles.’[3]

The A2K movement has been pretty successful. In 2008, roughly 20% of the total output of peer-reviewed articles was openly accessible. However, not all academic publishers were willing to adopt the open-access publishing model. In particular Elsevier, the largest publisher of scholarly journals in the world, has encountered resilience when it comes to their reserved publishing policy. In 2012, an online platform for researchers to ‘publicly boycott’ Elsevier was created, called The Cost of Knowledge. On this website, researchers from around the world can sign a petition to refrain from publishing in, refereeing to or performing editorial work for any of Elsevier’s academic journals. Today, 13.337 academics have signed the petition.[4] 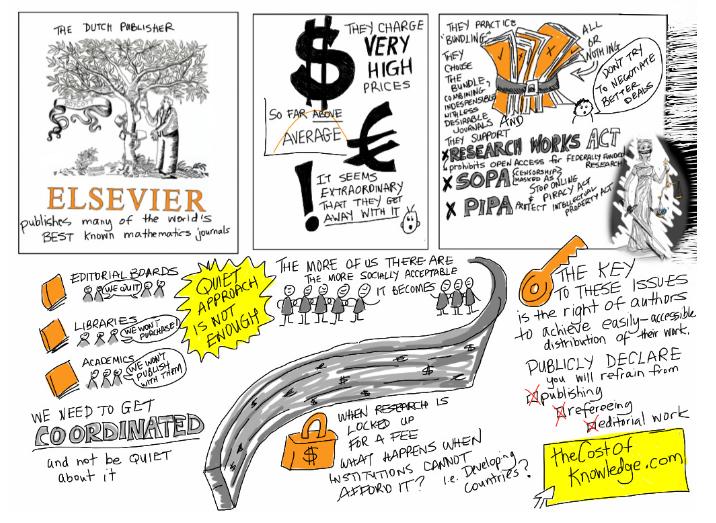 Why boycott Elsevier, in particular? First, there are the financial accuses. Elsevier is a textbook example when it comes to the marketization of the academic world. In 2010, the company made a profit of $1.1 billion.[5] The subscription fees to their journals are far above average. Second, Elsevier supported several anti open-access acts, the Research Work Act (RWA) and the Stop Online Piracy Act (SOPA). Especially Elsevier’s support of the RWA, a bill which would make the NIH Public Access Policy, along with any other similar government effort to make taxpayer-funded research openly accessible to the public, illegal, led to public outcry.[6]

Elsevier seems to have learned from its criticized stand against open-access publishing. The support for the RWA was withdrawn about a month after the boycott started.[7] Today, the publishing house even has a webpage leading the visitor to their ‘Open Access Options’. The boycott seems to have had its intended effect. We’re not simply subject to the will of the nowadays profit-driven academic world. We can make a difference! Open access is not just a faraway illusion; it is happening. And perhaps in the near future, the ideals expressed in the first Budapest Open Access Initiative might become reality:

‘An old tradition and a new technology have converged to make possible an unprecedented public good. Removing access barriers to this literature will accelerate research, enrich education, share the learning of the rich with the poor and the poor with the rich, make this literature as useful as it can be, and lay the foundation for uniting humanity in a common intellectual conversation and quest for knowledge.’[8]

Scholarship is written to be read.

[1] Gary Hall, Digitize This Book! The Politics of New Media or Why We Need Open Access Now, Minneapolis: University of Minnesota Press, 2008, pp. 4-5.

[8] Kathleen Fitzpatrick, ‘Giving It Away: Sharing and the Future of Scholarly Communication’, Journal of Scholarly Publishing 43.4 (2012): 355.