Google and its pirate ways


In October 2004, Google announced the world their idea of making books available for everyone on the planet, by simply search for them using their search function. Google Books (previously called Google print) wanted to make an attempt to scan around 17 million titles within ten years[1]. The philosophy behind this project was that everyone would have unlimited access to the knowledge that human kind wrote in countless books since the 11th century. Google claimed that this project supported their vision that knowledge should be available for everyone within a short amount of time.

It didn’t take long before publishers and authors found out that their books (or parts of them) they wrote or published appeared online. Turned out that Google started their project without thinking about the copyright issues they would have to deal with. Google started to scan books by approaching the world’s largest libraries, such as The Harvard University Library and The New York Public Library. This way they worked around the authors and publishers, it seemed.

In September 2005 the Authors Guild and a large part of the publishing industry filed a lawsuit against Google, claiming the company didn’t respect the copyrights of the books and failed to compensate the owners. They finally agreed to a settlement, which took two years to make and required Google to pay a total of 125 million dollar to the parties that were affected by their project. The settlement got a lot of criticism from all over the world, and a lot of authors signed petitions against it. In the end, the judge rejected the proposal.

One of the biggest concerns was that the settlement didn’t say anything about the privacy of the readers. While for example public libraries provide options to read anonymously, Google did not guarantee that its users privacy was going to be safe. And while Google claimed that they wanted to preserve the cultural history of the world by scanning all those books and providing them online, the thought of the company knowing what you’re reading was unacceptable for many. Another concern was not knowing what Google could do with all the information that they would basically own if the settlement would have gone through, especially with the books they scanned who did not had copyright on them anymore. Libraries worried about the possible monopoly position that Google has and what they can ask in return for providing the information online. They can higher the prices, or decide whether to put information online or not. 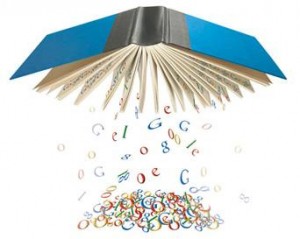 Because Google is such an enormous corporation and it has so many loyal users, nobody actually realised that what Google was doing with Google Books was actually illegal, at least when they started out. It was a massive form of piracy, but because it was on such a large scale, nobody recognized it as such in the beginning. It’s like comparing the king with a pirate, like Cicero does in his anecdote about Alexander the Great[2]:

‘The king asked the fellow, ‘What is your idea, in infesting the sea? And the pirate answered, with uninhibited insolence, ‘The same as yours, in infesting the earth! But because I do it with a tiny craft, I’m called a pirate: because you have a mighty navy, you’re called an emperor.’

It is a noble thing to try and ‘save’ the cultural history that mankind has written in all these centuries. What the Google Books affair shows us though, is that lots of people still feel a bit violated when it comes to putting the printed word on a screen. Because if a worldwide well known company like Google can take a book and put it online for the world to see, what will happen to copyright in the future? And when people start reading more and more online, will reading in privacy no longer be an option?