TPB AFK: ´How society ought to look` 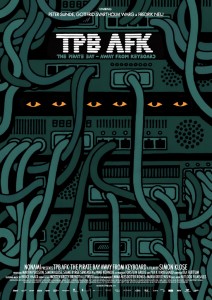 When I think about piracy, I think about a pirate with a wild beard, a wooden leg and a parrot on his shoulder. Kind of like Jack Sparrow from Pirates of the Caribbean, only perhaps less sexy. They do still exist, for example in Somalia where they have attacked several ships over the years. And not only on the open sea they operate, also on the internet lots of pirates are active, although they probably are not wearing eye pads and still have both hands instead of a creepy hook.

Before I started reading about piracy, I only new about websites like The Pirate Bay, Btjunkie and Isohunt. I am happy to be able to download for free, because I’m a poor student and I cannot afford to watch all the movies I would like to see in cinema or buy them on dvd. Although downloading and using the file for yourself is not illegal in Holland, I always feel a bit guilty. People put all their creativity in something, their project is copyright protected and I’m downloading it for free. An anti-piracy-organization called Brein is trying to stop piracy and although I put a link to The Pirate Bay in my blog, I cannot visit it myself, because the website is banned by my provider after being taken to court by Brein.

When I started looking into piracy, I realised that there is more than just the money. It’s also about the access to knowledge and about sharing creativity, the possibility to get inspired by a work, perhaps even become a better person after listening to music, watching a movie or reading a book. Lawrence Liang explains in ‘Beyond Representation: The Figure of the Pirate’: “Just as the piracy of the past disturbed the equilibrium composed of slavery, indentured labor, the expropriation of the commons, the factory system, and penal servitude, the electronic piracy of the present is destined to wreck the culture industry, either by making the economic and social costs of policing content prohibitive or by ushering in a diversity of new protocols for the use, distribution, and reproduction of cultural and intellectual content that will make the whole enterprise of making vast sums of money out of the nothing of data and culture a difficult business.”

But on the opposite, in many countries file sharing is illegal and if knowledge, creativity and inspiration are important, then why not as a pirate create it yourself? In February 2013 the documentary TPB AFK: The Pirate Bay Away From Keyboard was released. As IMDB states: “An intellectual freedoms documentary based around the interpersonal triumphs, and defeats of the three main characters against the largest industry in the known universe. The media industry.” In this documentary we follow Gottfrid Svartholm, Peter Sunde and Fredrik Neij as they are being sued for about thirteen million dollar by among others Hollywoods film industry.

The guys, who refer to the world as ‘AFK’ which means ‘away from keyboard’, do not use the term ‘in real life’ or ‘IRL’, since the internet is in their eyes also a reality and take this case very seriously. The prosecutors accuse The Pirate Bay of being a commercial compagny which makes money by offering advertising place. The guys claim to have spend the money on maintenance of the website, which, since it is the largest website in the world, costs a lot of money.

After watching the movie, it still wasn’t clear to me what the reason was for building the website. Several statements are made. They don’t offer the website out of an ideology, but because it’s simple and free. They want to use the possibilities that the internet offers and they long for an internet without any restrictions. They wanted to build the biggest website in the world. Whatever their intention was for building the website and whatever the reasons are that pirates have for making filesharing easy, the movie does offer some pretty interesting questions. Peter at the end of the documentary explains to the press: “I think it’s very important to look at how our society ought to look. Not just rule so that big compagnies can make a bigger profit.”

And he does offer a solution in the documentary; Flattr. A user can open an account and insert how much money he wants to donate per month. During the month he can click on Flattr-buttons, which are available on several website and at the end of the month, Flattr calculates how much money every website gets out of the monthly donation. It does seem like an interesting alternative system and the website for this documentary already received 655 donations via Flattr by 518 people. And the documentary offers a second option for earning money with the movie. TPB AFK can be watched online for free, but there is also the option to buy the movie for whatever you want to spend on it. The websites also offers T-shirts for 46 euros. So here is an example, big Hollywood film compagnies, there are others ways of making money with your movies. Now ask yourself a simple question: how do you think our society ought to look?