Collage, Internet and the freedom of images


Nonlegal consumption and circulation of content have powerful implications for the sociopolitical changes that are en route to shifting the momentum of production in today’s world. In terms of contemporary art and the effects of freely shared visual information, there has been a widespread proliferation of images due to the Internet. In particular, due to social networking sites such as Tumblr, Facebook, Instagram, Flickr among many others, images have become a pervasive aspect of contemporary culture and have found themselves being used for various uses. Graphic Design as well as many other disciplines within the visual arts refer to a widespread distribution of images and contain within them recycled images compiled from the Internet that together, create whole new possibilities of freedom that previously may have not been made available. Another example taken from the visual arts is a concept that is developing at a rapid pace using the same concept of reappropriation. 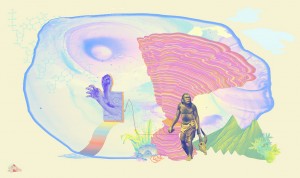 New media technologies as they function today perform specific social roles that unmistakably alter cultural traditions and practices. The specific form of collage as an artistic practice finds itself in this wave of shifting ideologies as it weaves together both relics of old media into realms of new media. As it has realized itself within a select periods of history as an artistic practice, collage has always popped up in the midst of major cultural transitions. First known recordings of collage appear in the Dadaist movement at the beginning of the twentieth century as a medium that extended the role of painting. Collage was practiced by artists experimenting with various forms within the Cubist movement exploring the possibilities outside of the canvas that restricted their conceptual dealings with their art. Parallel to this experimentation, the new abundance of paper made available in the midst of a massive industrial boom in Western nations. Another notable moment of collage appears in the punk-rock movement of 70’s with artists such as Linder Sterling most notably using collage to produce the album cover of the band Buzzcocks. This aesthetic carried over to a number of pop art pieces and eventually gained mainstream acceptance in the contemporary art circuit. The most recent movement of collage which I will discuss further involves the current historical moment beginning from the early 2000’s continuing to the present as a growing medium potentially working as a catalyst towards a renewed understanding of the medium.

Contemporary media theorist Fredric Jameson characterizes postmodernity as “the total saturation of cultural space by the image, whether at the lands of advertising, communications media, or hyperspace. This complete image-permeation of social and daily life means, he says, that aesthetic experience is now everywhere” (Kraus, 56). What Jameson ascribes to contemporary culture is the ways in which artistic practice today has left the confines of the artists studio, the gallery and museum and has drifted to every facet of life. From billboards to television screens made available in public spaces to advertisements, visual art has poured into the ethos of significant spaces. The proliferation of digital technology have allowed for what Jameson goes on to say “an expansion of culture that has not only made the notion of an individual work of art wholly problematic, but has also emptied out the very concept of aesthetic autonomy” (Krauss, 56). Aesthetic autonomy, known to occupy a single aesthetic has now traversed commercial platforms as art has found a variety of environments to occupy and thrive in. Advertising is one such example but the Internet and especially Web 2.0 has offered a wealth of opportunities to communicate and utilize the art.