From Coin to Movie Ticket: the changed currency in the gaming industry

Amazing voice-acting,  a great and mature storyline, emotional depth and solid directing while keeping the action tense and gripping. Judging from this praise above many would be inclined to say the subject matter here is a big budget Hollywood production, the truth however is that it’s about one of the latest critical video game hits, The Last of Us. In recent years game developers have been increasingly preoccupied with immersion and familiar Hollywood techniques to let their interactive stories play out on ‘the small screen’. The gap that used to exist between the two different forms of media has closed quite rapidly, especially when considering video games as a popular medium is a relatively young phenomenon.

The question worth asking however is if video games can retain their unique characteristics when they are trying to mimic their big budget counterparts as best as they can? What is ‘new’ about this new medium, if its most lauded creations could be deemed  interactive movies. In the same year Nintendo launched their Nintendo Entertainment System (1983), and skyrocketed the popularity of video game consoles, a game called Dragon’s Lair (Created by Don Bluth, who happened to be a director for popular animated children’s films) also hit the market with great success as a laserdisc experiment but especially as an arcade machine.

Dragon’s Lair has been described as an interactive cartoon, where the player influenced how hero “Dirk the Daring” survived the scenes stringed together, and has been re-released over 65 times on multiple platforms including the latest version for Apple’s OSX. 27 years later (2010) developer Quantic Dream released Heavy Rain on Sony’s third generation video game console, the PlayStation 3. Where Dragon’s Lair was described as a cartoon, Heavy Rain can be considered it’s ‘film noir’ counterpart. Despite utilizing a more mature genre, the game was still described as an interactive and highly immersive movie experience. These high-profile games also tend to pop up in movie theatres in elaborate commercials before the CGI infused spectacle main features they’re inspired on take centre stage. 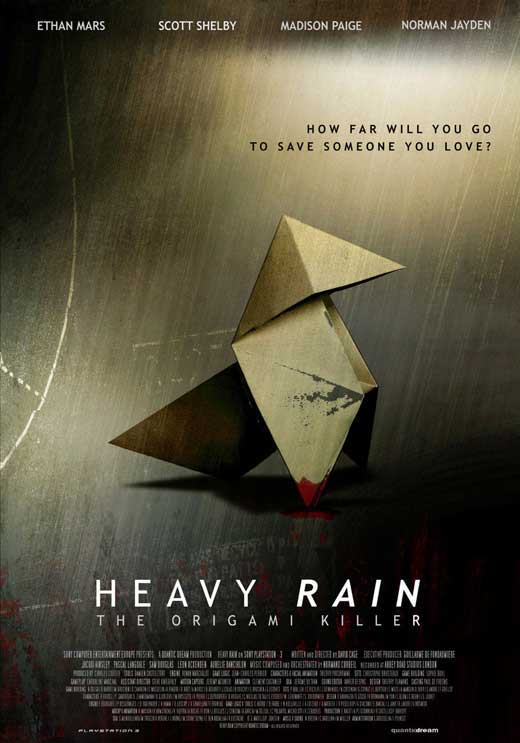 What is worrisome for the games industry when it comes to creativity though, is that the most profitable and high praised games in recent years also happen to be the games that take the player on these rollercoaster rides, thus pushing them further in that direction. All the thrills, yet firmly strapped down to follow the linear path set out by its creators, for which the Call of Duty series especially has gained a lot of criticism, despite this the games keep breaking sales records every year a new iteration gets released.

In this sense, video games are losing that ‘new’ in the term ‘new media’. An interview with renowned game developer David Jaffe, who is responsible for successful franchises such as God of War and Twisted Metal reflects this exact sentiment:

“A bad idea, waste of resources, of time and money, and worst, I think that it has stuffed the progress of video games, to our own peril […] gameplay and story should be so compelling and engaging that the player by the very nature of playing the game … is the story”

“I think we kind of found ourselves seduced by the language of film…and we started to put the expectations of films on games … we lost a lot of the fundamentals of what makes video games special.”

What Jaffe complains about here might be  just what game developers need to pay attention to, to progress the medium. Instead of an emphasis on remediating Hollywood, it needs to return to its pure gameplay roots and empower the player again. There seems to be a big movement going on however, where small independent game developers are gaining a lot of success with their productions, Minecraft would be the stand-out example here which has sold over 12 million copies on the PC. These independent games are getting picked up and released on the major platforms, so a wide audience of gamers gets to experience them.

Maybe the games industry has finally found that long-lost coin hidden in one of its pockets and is ready to insert it into the machine yet again:

The medium can once again be the message.