From Disabilities to New Abilities 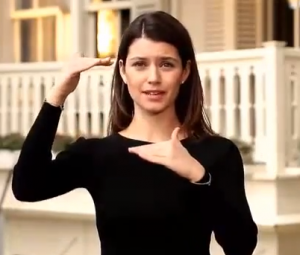 Have you ever thought about how visually impaired or hearing-impaired follow TV shows? Since television is taken for granted a long time ago, we usually ignore the fact that, for some, watching television can be indeed hard. Following TV series, news or movies is quite a challenge for both visually impaired and hearing-impaired as in generally TV channels do not have provide facultative means for an audience with disabilities. But, what if an object perceived as a commonplace like TV is deprived for a certain type of audience? www.engelsiz.kanald.com.tr realized on the website of the popular Turkish TV channel, Kanal D, addressed this issue when they started an online corporate social responsibility project.

Watching TV shows for visually impaired people is extremely difficult and arduous. Even though they can hear the dialogues, music and sound effects, it is not sufficient for them to follow plotlines and understand the whole story concept, as the films also include scenes without dialogue. Especially, in regards to the fact that there is a ‘Show, don’t tell’ motto of drama and play writers. Do you remember Alfred Hitchcock’ s movie Psycho’s (1960) famous bathroom scene where killer silently approached the girl from back with a knife? This particular scene is a good example of the challenge faced by visually impaired  since it shows how  it can be so difficult to understand  what is going on in the movie for this audience. Since they do not have a chance to see Marion taking a shower, the killer appearing behind curtain and knife slashes, it is extremely hard to grasp the grisly demise and follow the movie by just hearing the dramatic music and screams.

Following television is also a big challenge for hearing-impaired, as they can only understand what the characters say if they can read their lips, although it can be only possible in a close shot; usually that is not the case. Even though, they can see the images, characters and places in the movies, these are hardly enough to follow the plotlines.

The project, www.engelsiz.kanald.com.tr came to into existence with the intention to overcome these problems and make viewership easier for the audience who suffers from impairments. Basically, the aim is to become the eyes for the blind and ears for the deaf. On the www.engelsiz.kanald.com.tr, TV series are provided with options of sign language and subtitles for hearing-impaired audience and scene-by scene audio description for visually-impaired. Additionally, there are bigger screen size alternatives for the people who suffer from some vision disabilities.

In 2012, it was the first and only project that was concerned with the rights of audience with impairments in Turkey. However, after the start of the project, it made a huge peer pressure effect and other media companies started to do similar projects on their websites; for example popular TV channel Star TV’s website http://www.startv.com.tr/engelsiz. Companies could not sit idly while their competitors gained appreciation and respect from the audience; they also had to embrace the good practice.

This project proves that new media can offer solutions to challenges that cannot be fixed by traditional media, change the definition of accessibility and create a path towards more inclusionary society. In the past, Turkish government, other public and private institutions, media organizations were quite ignorant  and ineffective about  securing rights to access to information and rights to enjoy movies, cinemas and television programs etc. However, introduction of this project opened up a new debate and started social change in terms of disability rights, therewith more and more television broadcasting companies sought for new online social responsibility projects.

Another important aspect of this project, people start to think and wonder who are watching these special programs. When hearing audio descriptions, people start to realize that these verbal depictions are present, because someone actually cannot see what is going on. This kind of  realization will lead to an increase in disability visibility and empathy ability in the society. I believe, we will be seeing many more good online practices that help us to overcome obstacles posed by impairments in the future. We will be able to turn disabilities into different abilities by producing these kind of conscious and accessible projects.