About Jan Zuilhof
MA New Media and Digital Culture student at the University of Amsterdam. I am interested in media, both old and new. My main focus would be on online music culture, in which the tension between old and new media often arises. For instance, sharing music on the web is great. But it also makes local record stores (which I really love) disappear. And of course there is the aesthetics discussion. This MA year, I hope to do some research in that direction.

After more than a century of constantly re-inventing audio recording and playback, plenty of disagreement exists about which methods are the best. The invention of portable playback devices has certainly not made it easier to take your own pick. Since streaming became popular, this might have become even more difficult. Some people would claim that nothing beats good old vinyl records (but try listening to one on a bus). Some people hate MP3’s, but are very fond of uncompressed digital audio files (which consume a lot of megabytes). Some people don’t seem to care about audio quality at all and just want acces to as many songs as possible.

Different consumption as well as distribution intentions require different audio qualities. For this reason, music streaming services have to make choices about bitrates. These choices, however, may have different implications.

So what’s different?
Soundcloud and Spotify (just to name a few) handle audio quality in their own way. Soundcloud streams at 128kbps. The reason for the amount of compression might be economical: smaller amounts of data will be streamed so less bandwidth is used. This could benefit Soundclouds servers as well as the users experience. The audiophile is left unhappy though. Spotify has found a solution for this. Premium users are allowed to stream at 320kbps. Still a compressed format, but certainly superior to one mentioned above.

And does it matter?
The quality of streamed music does not only affect consumers though. Music producers and distributors might have a different perspective on the case. The availability of high quality audio streams makes piracy all the more attractive. Tools like soundcloud downloader enable users to rip music that was never meant to be played offline. It now converts the streamed file to a 128kbps MP3. Would Soundcloud improve their streaming quality, then high quality rips would become available as well. 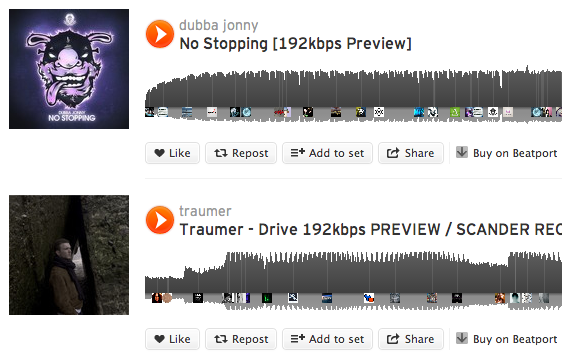 Some artists and record labels have shown to be concerned about the quality of the music they post online. They try to avoid piracy by uploading downgraded previews of their (often unreleased) songs. Low playback quality often isn’t audible on cheap speakers. But high end sound systems will tell the difference, so playing ripped versions isn’t an option for most DJ’s. Ironically, ‘downgrading’ to 192kbps is no exception. So some artists try to protect their music from being pirated, not knowing their efforts are useless.

What should we make of this?
So this raises questions about the aesthetics of audio streaming. If  some artists apparently don’t even notice the downgrading of their own music, how many listeners would? Should platforms strive to deliver music in the highest quality possible, or should their ambitions be directed elsewhere (like availability for example)? Will high quality streams discourage artists to preview their fresh made pieces of music?

My suggestion is that different uses require different bitrates. Perhaps more personalized upload options combined with greater transparency could solve some problems. What if distributors (whetter artists or labels) could choose between different playback qualities, and users would directly see what bitrate they were dealing with? I realize this might be a somewhat optimistic idea coming from someone who is involved in audio aesthetics way above average. And especially for this reason, I highly encourage everyone to engage in this discussion.