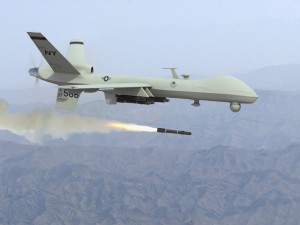 Not too long ago I wrote  a short blog (in Dutch) about the increasing popularity of drones. By drones I mean unmanned (aerial) robotic vehicles and obviously not the variousity of species of male insects. In this post, I discussed the increasing popularity and presence of drones in the Dutch newspapers and the potential connection towards a change in decision making in society, which could explain this increase in coverage. I argued that the drones were a form of representation of our current attitude towards decision making.

More and more are our decisions based upon raw and processed data. By interacting with our surroundings in such a way, it could be possible that we are distancing ourselves from the ‘real world’ and, instead prefer a mediated world view, which finds itself based in data and percentages. In this post, I will argue that there is a possible new frame of the drone rising

My previous findings also included the way in which drones were used and ‘seen’ by the newspapers. Drones appeared to be (almost) exclusively used in a military context. This context was mostly created by several wars in which the drones were deployed. Unmanned warfare, robotic warfare and the future of warfare were several important ideas, closely connected to the drones. 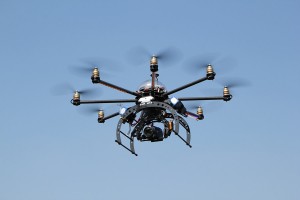 However, lately I have been seeing a lot more, non military usage of drones in the media and in my personal life. For example, a friend of mine bought a small drone. He can control it through WIFI, which connects the drone to his tablet or his smartphone. He uses this drone mostly for his personal hobby and creates videos when he is on vacation. While at first this may sound rather unimportant, he is also hired (on a regular basis) by several real estate agencies. They hire him and his drone to make aerial video’s about their property and to map potential interesting places. When he and his drone are present in public spaces, they both are mostly a point of interest to people passing by. Another example of a new ‘image’ of drones is the increase of drone usage by governments to surveil cities and to organise, manage events and even detect crime.

Drones appear to be evolving from their origins of war, as many (new) media objects have done before them. Society is slowly getting used to drones and start recognising the possibilities they bring. Drones are still receiving a lot of attention in the media and in everyday life. The possibilities of drones and their capabilities (technical) are increasing everyday and they are slowly being ‘fine-tuned’. In the following video the athletic power and finesse of drones is demonstrated as well as several possibilities.

Drones will continue to be further developed and are quite interesting media objects.
I am very curious how this technology will develop and what it will look like in several years time, and what their uses will be and what kind of our nature they will represent.