In 2010, Google.cn redirected users to Google.com.hk. Google released an official blog post announcing that it would no longer censor search results for Chinese users. The decision proceeded an allegation that U.S. companies (Google included) had been attacked by Chinese hackers. Google retaliated by unleashing the world wide uncensored web. In Google’s official blog post they detailed their vengeance: “… we are offering uncensored search in simplified Chinese, specifically designed for users in mainland China.” The conflict follows the typical dramatic arch of United States foreign policy.

Google previously complied with the Chinese government’s censorship requirements. The company’s revenge was clothed in democratic values. Amidst the allegations were suggestions that the Chinese government had accessed the GMail accounts of Chinese human rights activists. The United States technological giant struck back by playing the moral victim. What about the potential economic incentives? The Chinese government prohibits access to popular Google products. I imagine that played a role.

National tensions turn virtual as United States corporations spread Western ideals through a new medium. Internet is sold along with values about how the medium should be used: Democratically. Accusing a government of internet censorship becomes the equivalent of pointing out new “attackers,” or regimes that undermine United States economic interests. The foundation for such judgment is a Western assumption about the media’s role in society. Let’s Marxist critique that, shall we? 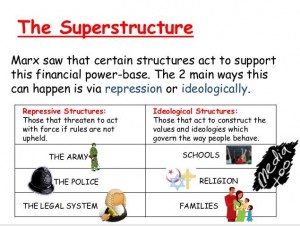 Marxist media theory asserts that media is an ideological structure that supports the financial power base of capitalist societies. The theory begs the question, to what extent does internet serve the United States ruling class? The Google and China face-off becomes a loaded text. After all, what right does Google have to determine what information should be made available to Chinese audiences? An assumed economic right that precedes all others: Freedom to sell.

If we’re not careful, the assumption will think for us. Censorship is bad. Freedom of speech is a basic human right. Access to information is vital. But as Fidel Castro responded to Barbara Walters after being asked about freedom of the press in Cuba, “nosotros no tenemos la misma concepción. Nosotros no tenemos el mismo concepto de la libertad de la prensa que ustedes” (We do not have the same conception. We do not have the same concept of freedom of the press) I ask the reader to consider that there may exist a different conceptual framework through which media purpose can be analyzed. Perhaps our assumptions are wrong. They are not surprising.

Marxist media theory posits that media audiences in capitalist societies are ill-equipped to self-reflect. This overview explains that these audiences “lack ready access to alternative meaning systems that would enable them to reject the definitions offered by the media in favor of consistently oppositional definitions.” At 2:30 minutes, when Castro tells Barbara there are more important problems than definitions of freedom of the press, she replies, “but we allow opposition.” Walters fails to do what Castro has already done; imagine alternative meanings.

These moments serve as rich soil from which discussion of media imperialism can grow. What purpose does the internet (and media) serve? What cultural context informs our perspectives? Is it our right to impose a definition on other cultural realities? Now, we revisit Google’s decision. With the rhetoric in their blog post, they exploit a media audience “socialized into… the norms of the dominant [class] culture,” while underplaying their economic motives.

On July 9th 2010, The New York Times published an article announcing that the Chinese government had renewed Google’s license. After threats of losing the world’s largest Internet market, Google decided to discontinue their redirection. Call it forgiveness. Call it financial savvy. Perhaps it’s worth challenging our assumptions. Ideally, we would do so because our world views are not god-sent. Realistically, we would do so because imperialism has moved to a new platform. Barbara Walters told Castro, “what it all boils down to is freedom,” as if, when the water evaporates, we are left with something simple.