The sentence above was extracted from the song “Vem Pra Rua” – Come to the Street -, by a popular Brazilian rock band O Rappa. The sentence says: “Come to the street, because the street is Brazil’s biggest bleachers”, in a free reference of the country’s biggest national passion: Football.

In the past couple of months, Brazil has been facing several protests against corruption over the whole country. It started by students from the state of São Paulo, organizing via Facebook and Twitter protests against the increase of the city bus fare.

Students had created an event they called “Act 1”, which the intention was go into a public square, gather and expose their dissatisfaction. Due to attacks by police against them, once again students started to re-organize themselves for a second act and now also making complains about Brazil’s situation and it corrupted government. The second event was also created on Facebook, but this time students were no longer protesting only against the bus fare, but with their overall dissatisfaction with the country’s situation.

A hashtag was created #VemPraRua (#ComeToTheStreet), in reference to the song mentioned in the beginning of the text. The creators of the event used the popular song, which originally was a popular jingle for a car brand TV advertise, to motivate people in a relaxed way to actually move into the street, and not only protest via Social Media platforms.

The event gained popularity and students all over the country started to organize protests also via Facebook and Twitter in different cities. People were online posting live pictures on their Facebook page and communicating with themselves via Twitter, with the hashtag.

Official numbers (policy source) estimate over 200.000 people, only in the city of São Paulo, gathered to protest against the government. The strength of the movement got so big, that a NGO – Non Government Organization – was created: Vem Pra Rua, which now has their own website vemprarua.org,  currently being used to inform people about all kinds of protests that are being organized in Brazil and news regarding education, health system and government’s public affairs. 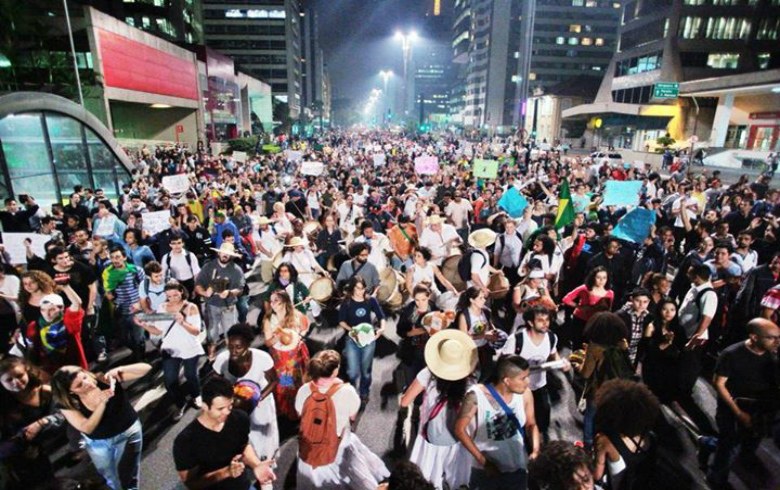 As result, the mayor of São Paulo, Fernando Haddad, didn’t raise the bus fare. In national figure, the president Dilma Roussef announced that the future oil royalties will be converted in education and health investments.

The success of the event also created several other popular jargons such as #OGiganteAcordou (#TheGiantAwoke), referring to a big nation that started to get together to expose the country’s situation. Videos on YouTube, pictures on Instagram , shows how the use of Social Media platforms can influence people’s way of communicating and the massive and fast impact in the pop culture of a nation.