What Tinder does is take basic info from its users and match them with others that ‘’look’’ compatible based on location, interests and common Fb friends. Users can chat with each other, only after they both liked each other’s photo. Also they can choose if they want to talk to someone or not. The best part about this application is that it’s anonymous and it doesn’t reveal your activities on Facebook.The app is not only meant for straight people, guys who like guys, girls who like girls, people who like both, everyone has the opportunity to meet someone special.

The initial release of this application was last September and till now it has created more than 250 million matches. Tinder was created by Sean Rad and Justin Mateen. It started because the creators realised that there are applications that connect you with people but there is not an actual application that helps you meet new people and hook you up with them.

There is a similar application for gay people that started before Tinder and it is called Grindr. It applies to gay or bisexual people that want to have ‘’easy’’ sex. Both Grindr and Tinder work with satnav (satellite navigation). Grindr allows users to locate other users in a close distance from where they are. Each user has a profile which includes photos, basic info and their location. So if someone is interested he can chat with the other user immediately and exchange photos and other extra information.

Looking at reviews and ratings on the app which can be found in the Apple App Store and Google Play for Android, the app gets four out of five stars from users. Although comment #6 by Alleenzaam states: “No recommendations, the loneliness is killing me.” The comments also show some people disagree with the app having to link to Facebook, as they don’t have Facebook or don’t have the 50 Facebook friends that are required, to use the app. 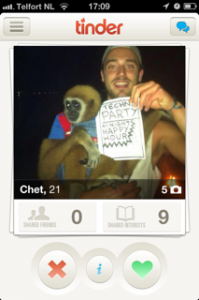 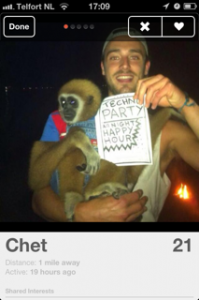 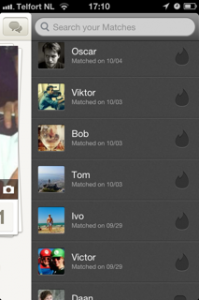 We thought it would be fun to see the perspectives of men compared to those of women when it comes to Tinder. In Tinder review: a woman’s perspective, relationship expert Caroline Kent tests out dating app Tinder for a week. The following quote from the online article shows a part of the superficiality of the app: “On closer inspection, his pics are all selfies, which screams “I’m vain and don’t have any friends to take pics of me.”

When looking at the app through a man’s eyes, Willard Foxton lets a friend take a look at the women he comes across with his Tinder account: “Too fat..No…Too thin..No…Eww, ugly dress…No! That’s never her car…binned! Mirror Selfie… No!”

An important thing Caroline states in her article, is Tinder being the app of the moment because of its immediacy. This makes us wonder: what does this really mean? Time Barrow, a blog on digital orality, quotes Bolter and Grusin’s Immediacy, hypermediacy and remediation ’stating immediacy is about the user of a medium wanting immediate access, understanding, and information. Tinder offers immediate access for anyone who has Facebook and downloaded the app, but at the same time the app doesn’t allow users to edit all the information that has been (incorrectly) put on the app via a Facebook account. Tinder is easy to use by buttons that clearly show what they exist for and a clear interface. Tinder offers little info, which probably makes it more easy to use and more fun as well. By only knowing what someone looks like, their age, mutual friends and one simple quote, the possibility of an eventual date even gets more exciting.

Reviewing the app from a personal stance we would say using the app can work as a boost or a downer for your ego, depending on the amount of matches you have. When you try to think of Tinder as if it was real life, Tinder actually is like an interface between your brain and people you could see walking down the street. It’s no secret people judge each other within a matter of seconds, Tinder makes you do the same thing, without having to actually see someone in real life. In our environment we have also noticed people who are in a relationship use the app, just to get some extra attention. If you need attention, have a romantic vision on meeting people online in a sort of superficial way or just hope to meet real love: get your Tinder on!