Bang With Friends – are the ‘hook up’ sites the future of dating?


By Annika Kuyper and Jakub Dutka 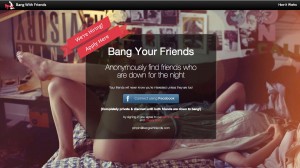 Bang With Friends is a casual sex app, launched in January 2013. How does it work? It is dead simple. The app connects to your Facebook account and downloads your friends list. Subsequently, you tick the friends you would be willing to have an intercourse with. Then, if any person you ticked uses the app as well and ticks you, you both receive an e-mail notification. The rest is up to you.

The app was developed by 3 young Americans, based in California. In first 4 days the app got over 20’000 ‘Likes’ on Facebook, and by May, there were 1 million users out of which 200’000 ‘hooked up’, according to the CEO, Colin Hodge.

Unsurprisingly, the app caused as much interest as outrage. Apple banned it from the App Store after a week, citing guideline 16.1, which rejects “excessively objectionable or crude content.” Moreover, Zynga Inc. settled a lawsuit against the initiators of the app for alleged copyright infringement. Bang With Friends provoked the creation of related apps, like Bang With Professionals (which used the same mechanism, but with LinkedIn connections; it was shut down after a week) or a ‘counter-app’, Bang With Friends Exposed.

Bang With Friends received considerable media attention, including a lot of critique and moral panic. Why is the app and all the similar ‘hook up’ apps so popular? It seems in the digital age we are obsessed with time. Rebecca Holman, in her piece on another ‘hook up’ app, Tinder, remarks: “online dating can be expensive, soul-destroying and above all, time consuming. Not just the dates themselves, but the endless emails you end up sending before you even go on a date.” From that perspective, Bang With Friends allows for more straightforward approach, and, as one of the originators of the app said, “[t]o cut through the pretense of dating and connect people to friends-with-benefits or more.”

As Mark Deuze remarked, we are not living with media, we are living IN media. Today, we spent almost all our awake time being connected.

With that lifestyle shift from ‘analogue’ to ‘digital’, the sphere of love and sex also underwent a major transformation. As Saslow (2013) points out, numerous researches confirm that usage of social media builds social capital and is used to strengthen offline relationships. Facebook, Twitter and other social networking sites have become an integral medium for communicating within and about interpersonal relationships (Baym, 2010; Boyd, 2008; Turkle,2011). According to Edison Research (2010), 74% of adolescents and young adults aged 12–24 years in the United States use Facebook regularly.  The numbers are growing every day.  Nearly half of Facebook users visit the site at least 6 days a week(Facebook, 2012), and US residents spend more time on Facebook than on any other website (Nielsen, 2011). Because social networking is so popular and has become integrated into the fabric of many people’s social lives, it comes with no surprise it replaced a lot of social and romantic activities, previously performed in real life.

Talking to a random stranger can be done using Omegle.
Casual ‘hook up’ apps : Grindr (for gay men), Brenda (for lesbians) and Blendr or Tinder (for stright people).
Dating is made easier by Badoo, OkCupid and many more.
Even so-called ‘booty calls’ can now be made using apps.
Meetings, dates and sex (‘cybersex’) can be carried out via Skype or DurexFundawear.

But what are the further implications of the ‘hook up’ sites? As one teenage interviewee stated: “We don’t date; we just hook up.”  The Daily Dot suggests Bang With Friends is an indicator that society has forgotten how to communicate verbally. The Inquisitr pointed at the app’s contact email—pimpin@bangwithfriends.com—as proof of decidedly frat-boy-esque qualityof the service. The process of dating now comes down to a practice closely resembling online shopping – we can just go online and tick the ‘products’ we want. Thus, romantic and sexual relations are further objectified. On the other hand, however, it can be argued that some people have always been interested in commitment-free sex and the Internet only further enabled the practices that were already common.

It is difficult to assess the phenomenon of ‘hook up’ sites without extensive social and psychological study. Is ‘hook up’ culture to prevail? Who knows what the future may bring?

Turkle, S. (2011). Alone together: Why we expect more from technology and less from each other.
New York, NY, USA: Basic Books.