Bring Your Own Beamer is a concept originated by Amsterdam-born, NY-based artist Rafaël Rozendaal. Since the first event in 2010 in Berlin, the idea has spread to many cities worldwide, reaching upwards to 150 editions. In an interview we conducted with Rozendaal, he recalls the moment he conceived BYOB, “I remember that it was always so difficult to organize media exhibitions, because of the hardware. So I thought if everyone takes care of their own gear, it’s much easier, which means it would be more spontaneous.” Rozendaal likens the empowering platform of the internet to BYOB events and is happy to present a zero-budget alternative to artists interested in exhibiting their work.

This specific edition of BYOB Amsterdam took place on the fourth of October, 2013. Amsterdam’s edition was ambitious in terms of size with four partners – FIBER, an audiovisual network platform, SETUP, a Medialab from Utrecht, Vlaams Cultuurhuis de Brakke Grond, a Flemish arts center based in Amsterdam as well as Nick Liefhebber, a graphic designer – collaborating with over 75 artists to make this event happen. Works and screening spaces were distributed on a first come first served basis, with events taking place both in and outside around the area of the Nes. The main square in front of the Brakke Grond soon proved to be the most vibrant spot of the night, with its combination of music, screenings, game interactions, and live drawing performances.

As Frank-Jan van Lunteren, director of SETUP, explains to us in an interview, by making the event outdoors, this edition of BYOB was able to overcome the white-cube feeling of an indoor art exhibition, opening up the space to a wider audience.  For Frank-Jan BYOB serves as a platform that confronts the viewer with “highly different types of imagery,” making possible “an exploration of yourself, finding out what kind of imagery makes a deep impression on you.” 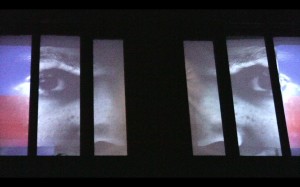 If you’ve ever wondered what a psychedelic trip might look and sound like, standing in the middle of BYOB’s hotspot Brakke Grond may have given you a pretty accurate impression. The surrounding whirl of vibrant colors, the arrhythmic blinking of lights from every angle, an array of differing soundscapes puzzling your eardrums, all combined to create a surreal atmosphere that innervated as well as delighted. Children were among the evening’s most enthused and participatory spectators. Artists freely expressing themselves by their own means appeared to be the ideal formula in fashioning a good time had by all. When asked what the general response is to BYOB events, Rozendaal seemed quite accurate in answering, “People are always super happy.”

See for yourself some of the enchanting and stirring images projected onto the streets and walls of Amsterdam.

One of the first projects that caught our eye was an interactive installation by Leon Spikker and Sefrijn Langen. Approaching it, you might think a simple kaleidoscope image is being projected onto the wall until you notice a webcam setup. By manipulating objects found on a table and moving the placement of your hand to change colors, the resulting webcam image is morphed, mirrored, and repeated to create the kaleidoscope effect. Once you’re satisfied with an image you’ve generated, you can automatically upload it to the Kaleidoscopica Facebook page by a click of a button.

Join the frogger network to play! Another work that entertained many people over the course 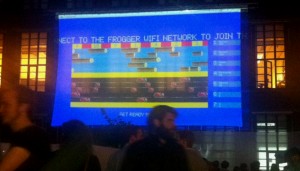 of the night was Marco Mooren’s and Richard Lie’s projection of an old school version of the game “Frogger”. Visitors could join the game by logging into a local wifi network set up by the artists. This work especially stood out, as it created a further layer of interaction between the visitors. Aesthetically, it played out a nice paradox between the old school, minimalistic make-up of the game and the “high-tech” method of having people use their own smartphones as joysticks.

Want to make your own Rembrandt-painting, using elements by Rubens? No, problem. Museapp offered visitors the possibility to play around with sceneries, backgrounds, figures and objects of famous historical paintings. The result – many beautiful collages and remakes developed over the course of the night.

BYOB proved an interesting and inspiring experience, showcasing a great variety of ways to interact with a beamer. Opening up the possibility to participate for anyone who comes along, BYOB offers an important alternative exhibition space to that found in museums or galleries. As Frank-Jan van Lunteren puts it: “In general, BYOB evolves as the techniques keep evolving. Projection mapping has become popular, for example. But also pico beamers (very small, portable projectors) are rather popular. This is the beauty of BYOB: all works represent the current state of (1) technical possibilities and (2) issues that artists feel a need to address in their work.”