8tracks and web-radios: the contemporary music consumption is personal and social

Since the growth of the Internet and its collection of interactive platforms and social networks, the cultural industry has turned a critical corner. This statement is especially true for the music industry in term of music creation and consumption, as well as music commercialization. Sharing platforms like Youtube, Myspace, Deezer and many others give to music lovers the opportunity to discover new artists, enjoy music at any-time, anywhere and for free. This participatory cultural process is becoming more prominent over traditional ways of music consumption. In spite of copyright issues and the vigorous attempts by record companies to slow down the opening access to music (e.g. HADOPI french law) , on-line music platforms are coming out on top. How this widespread phenomenon of music democratisation does continue to grow and to draw more and more followers? I will expose possible answers to this question having a look at the website and mobile application 8tracks.

Co-created by David Porter and Remi Gabillet, 8tracks is launched in August 2008. It combines both the characteristics of a web-radio and  a social networking platform. More specifically, it is a web-cast media that uses Internet streaming media technology to distribute music content simultaneously to a large audience. 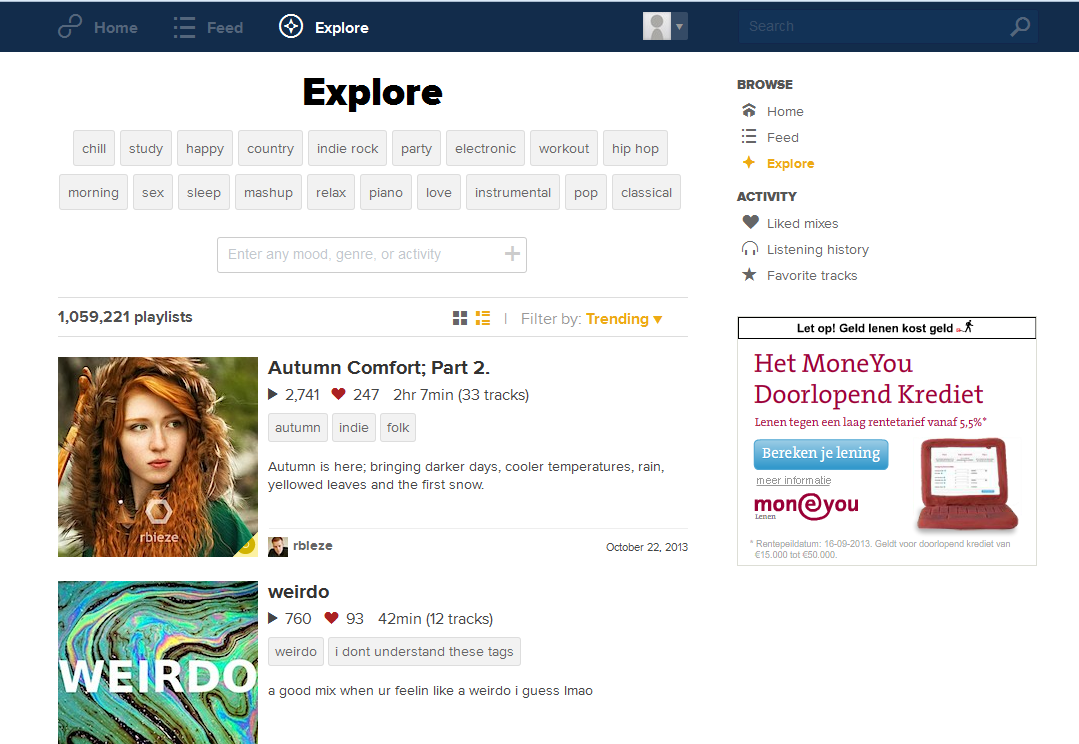 8tracks’s users can make compelling mixes from MP3 sources as well as from on-line libraries, like Soundcloud and Free Music Archive, and create play-list of minimum 30min, which approximately corresponds with 8 tracks. They tag the mixes under themes  that match a particular activity, mood, musical style or artist name e.g. classic, morning, working. Indeed, a simple listener is offered a list of several mixes that meets both his one-time wants and fits his general musical tastes. Today, 8tracks gathers a growing audience of  6 millions of users mostly aged between 18 and 24 years old.

The concept offered by 8tracks matches all kind of  users’ interests. This is firstly because it approaches music as being dictated by personal taste. Users can customize their mixes under personally chosen tags and can store their favourite play-lists on their on-line personal profile. 8tracks can be seen and used as a music curating platform for discrete and personal use. Secondly 8tracks is a community based on interactivity. 8 tracks allows users to show off their tastes by publishing play-lists or commenting others’ mixes but also releasing their activities on 8tracks on other social networks via a “share” button that, amongst others, relays to Facebook, Twitter and Google+. Thus, 8tracks can be experienced as an interactive platform that offers on-line social music discovery.

From music consumption to musical democratization 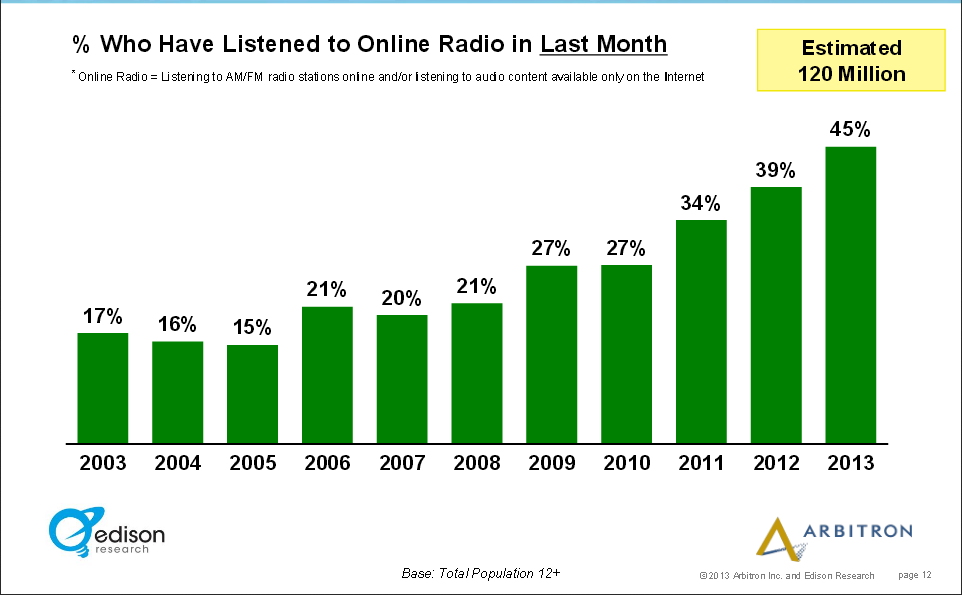 We could believe that, like the newspaper industry, the music digital consumption decreased the audience of terrestrial radios. But on the contrary, on-line radio gave a second wind to the music consumption in a general way. A research led by Edison Research on the American radio audience shows a significant increase of listeners. If 6% of the persons surveyed use only on-line radio, 45% of them make use of digital radios at least once in a month. Overall, on-line radio is growing in term of both weekly usage and time spent listening. This phenomenon can be explained by both customization and social advantages offered by current on-line radios like 8tracks.

Unlike Youtube or Deezer, 8tracks is not an on-demand streaming platform. It is a music curating application that does not allow the user to have a full control over the programming. Users cannot change or chose track while listening a mix. Indeed, 8tracks preserves the core principle of a radio: the sales promotion. In this sense, 8tracks encourage the purchase of artists’ work, not only by broadcasting someone’s music but also by allowing the user to directly buy his favourite track on-line. If the user likes a song, he can access the original source of it. By clicking on the button next to the name of the track the user can be redirected to Youtube , the Souncloud or the iTunes, and download for free or buy the track.This phenomenon of music democratisation under framed music consumption not only drags a movement of general music popularisation but also characterizes the mainstream of the contemporary music promotion. So thanks to social platforms like 8tracks old tracks are refreshed and young talents can become popular. The power of on-line communities reveals to be the most efficient in term of trends creation and spreading.

To sum up, the growth of web radio followers can be justified by the two aspects highlighted in this article. Firstly, by both the personal and collective advantages of on-line music consumption, through music discovery, sharing and curation that empowers users. Secondly, by the organized framing of the music distribution that prevents copyright issue and helps the music industry to remain efficient in spite of its promotion relocation.