Invading Sonic Warfare: Sound, Affect and the Ecology of Fear

Sonic Warfare: Sound. Affect and the Ecology of Fear is a book written by Dr. Steve Goodman, who has a PhD in Philosophy, but to a whole group of people he might be  better known under his alias: Kode9, a known dubstep DJ and founder of record label Hyperdub.  Sonic Warfare explores the uses of acoustic force and how this can effect, and affect both people and objects. This blog post is accompanied by a presentation with Prezi we did on the book which can be accessed here. Because the Prezi relied on an equal combination of text and video, this blog post will put more emphasis on the theory discussed in the book. The videos however might be useful to look through to get  a feel for the theoretical concepts via a different medium. Therefore we have added them into a single YouTube video.

Because the book is made up of a lot (34!)of short chapters with an average of only 5 pages per chapter, we decided we would  take five recurring or important concepts of the book and expand on those through the use of text and video in our presentation and a more theoretical approach in the blog. The concepts we landed on are: (Sonic) Warfare, Vibrational Nexus, Rhythmachine, Sonic Branding & Unsound. Instead of rephrasing Goodman’s words into ours, we decided to summarize these concepts using mostly his quotes and way of expressing things. Finally, we also added a playlist, made with various YouTube videos, that contains the music mentioned in the book to give interested readers a chance to explore Sonic Warfare through the medium it writes about: sound.

Sonic Warfare: this title already hints at the subject matter the book tries to tackle. It is best defined as war seen through the eyes of a specific medium, namely: sound. Not just sound which can be heard, but also sound that is not audible for the human ear but can have grave consequence for the human condition nonetheless. Goodman is mostly concerned with the uses sound and accompanying vibration can have for the human subject: the induction of fear and the affects it has on individuals and crowds alike.

The phrase sonic warfare first wormed its way into memory in the late 1990s. The implantation had taken place during a video screening of the The Last Angel of History, produced by British artists, the Black Audio Film Collective. The video charted the coevolution of Afrofuturism. A notion of sonic warfare lies at the heart of modern experimental music and takes us back to the apex of the sonic avant-garde, to Luigi Russolo’s Futurist manifesto for music, The Art of Noises, which glorified explosions, rifle fire, and the dissonance of industrial machinery as an assault on the deadened sensorium of classical music and bourgeois aesthetics. The futurist art of war in the art of noise framed cultural innovation in the field of music as a sensory war in which the stakes were no less than the distribution and hierarchical stratification of the nervous system. The “sonic” has become an increasingly fashionable terrain in recent years, coinciding with the explosion of electronic music culture in the 1980s and 1990s and its intensification of this futurist and Cagean openness to nonmusical sound and a related resurgence of interest in the potential of postliterate sensory recombinations by attacks on the dominant ocularcentric models of Western philosophy.

Sonic warfare then, is the use of force, both seductive and violent, abstract and physical, via a range of acoustic machines (biotechnical, social, cultural, artistic, conceptual), to modulate the physical, affective, and libidinal dynamics of populations, of bodies, of crowds. Before the activation of causal or semantic, that is, cognitive listening, the sonic is a phenomenon of contact and displays, through an array of autonomic responses, a whole spectrum of affective powers. Sound has a seductive power to caress the skin, to immerse, to sooth, beckon, and heal, to modulate brain waves and massage the release of certain hormones within the body.

The vibrational nexus is a set of experimental practices to intensify vibration, that has been developed for unfolding the body onto a vibrational discontinuum that differentially traverses the media of the earth, built environment, analog and digital sound technologies, industrial oscillators, and the human body. Each actual occasion of experience that populates this discontinuum will be termed as vibrational nexus.

A nexus is not merely subjective but also objective: A nexus enjoys “social order” when:
1) there is a common element of form illustrated in the definiteness of each of its included actual entities
2) this common element of form arises in each member of the nexus by reason of the conditions imposed upon it by its prehensions ( a “simple physical feeling”) of some other members of the nexus
3) these prehensions impose that condition of reproduction by reason of their inclusion of positive feelings involving that common form

Such a nexus is called a “society,” and the common form is the “defining characteristic” of that society. 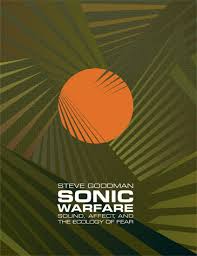 The rhythmachine is defined by Kodwo Eshun as the abstract machine of rhythm, connecting smaller information components perceivable only non sensuously through pattern recognition. It is a parallel processing system enhanced by sonic science.

An algorithmic entity abducts bodies, modulating their movements. It lies between the beats; it is the glue that congeals individual entities together. Being abducted means sensory hierarchy shifts from perception of rhythmachine to texturhythm, becoming a vibrational transducer, not just a listener. The rhythmachine takes place across the skin, for the ‘rhytmatician’ it thinks. Eshun says that a beatles cliché of futuristic music reimposes a ‘pre industrial sensory hierarchy that shut up your senses in a Cartesian Prison’, with a potential to reverse-engineer what a body can do. It reaches its hyperhythmic apex in the futurhythmachine of U.K. dance music, jungle.

Eshun does adopt many signature aims of futurism in his concern for the rewiring of sensory technologies to both mutate perception and synthesize new modes of thought. Eshun says: “African slaves that experienced capture, theft, abduction and alienation were the first moderns”. An afrofuturist artist/musician tactic is to alienate from sonic identity and feel at home in alienation because afro-diasporic subjects live the estrangement that science fiction writers envision. Black existence and science fiction are one and the same. Eshun suggests that Afrofuturism’s key intervention is directed toward those cybernetic futurisms that talk of things that haven’t happened yet in the past tense and thereby seek to model variation over time by oscillating between anticipation and determinism.

Sonic branding basically is the use of sound to reinforce brand identity; or the use of a special sound to identify and advertise products associated with a particular manufacturer. In preemptive power a product does not necessarily preexist the contact between brand and consumer. The contact in terms of the viro-sonic production of allure serves to produce memories of contact with products that do not yet exist. A brand comprises both actual and virtual relations, influencing the patterning of activities, rhythmically distributing them in time and space. A brand functions as a nexus, holding together a set of relations while maintaining, by iterated feedback, a dynamic unity in an environment of product differentiation and brand integration. Some interesting recent research related to sonic branding revolves around a strangely common psychoacoustic condition.

At the forefront of this research is branding psychologist James Kellaris, who has been dissecting earworms, unraveling their slight bodies to investigate their basic affects. For Kellaris, earworms cause a neurodisturbance that he terms “stuck tune syndrome”, the effect of a seemingly innocuous piece of music lodging itself into the brain and refusing to leave. Kellaris has noted that certain types of music (particularly anomalous stimuli) operate as “mental mosquito bites.” They create a “cognitive itch” that can be scratched only by replaying the tune in the mind. The more the mind “scratches,” the worse the itch gets. Using terminology close to memetics, Kellaris talks of conditions such as “stuck tune syndrome,” which describe earworm infection. Musically, the primary vector of earworm transmission is what is referred to as the hook. According to sonic brand experts, suggestions for the removal of earworms are few and far between. The limited repertoire usually includes techniques for removal such as substitution, completion, donation, and extraction.

In conclusion: sonic branding entails an intervention into the affective sensorium’s mnemonic system. It can be considered a program for modulating the auditory nervous system through contagious vibration.

Unsound refers to the apparently paradoxical field of inaudible audio, infrasonic and ultrasonic. The Mosquito Anti-Social Device (M.A.D.), enthusiastically promoted by low- intensity warfare luminaries such as British daytime TV’s Richard and Judy and GMTV (a gaudy, populist wake- up show) emits a high- frequency sound with an effective range of 15 to 20 meters, and is supposedly detectable only by people that are under 25 years old. Field trials have shown that teenagers are acutely aware of the Mosquito and usually move away from the area within just a couple of minutes. Research has shown that the majority of people over the age of 25 have lost the ability to hear at this frequency range, which is roughly 16 to 20 kilohertz. It should be borne in mind, however, that the unit usually has the desired effect – moving the crowds away—within just a few minutes, at which time the unit can be turned off.

The Mosquito device, an adaption of technologies initially deployed as a means of rodent control, intervenes generationally through a differential in human hearing. As recent research has shown, the narrow fold in molecular vibration that constitutes the bandwidth of audibility is much more permeable and mutable than is normally assumed. It is hardly controversial to suggest that, as more has been learned about the neuroeffects of very high and very low-frequency sound, and bionic audition develops, the perceptual battlefields of sonic warfare have broadened.

Interested in reading the whole book? You can read it right here