What is the future of Facebook? With the fast-evolving nature of new media, it is interesting to think of the possible scenarios for the further development. One way to do so is to look at a former Facebook clone website, and see what we can learn from it. In this case I’m talking about Vkontakte. A website you probably never heard off.

Vkontakte, which literally means “in touch”, is the second most popular website in Russia, coming after Yandex, main Russian search engine. Vkontakte was created in 2006 by Pavel Durov, and was originally meant as a student social network. Today, the social network consists of over 260 million registered accounts, with over 60 000 000 daily active users. Vkontakte is often called one of the biggest Facebook clones. However, eventually,Vkontakte has evolved into an independent social network with its own specificities.

The fact that Vkontakte was created to serve as a social network for university graduates was not the only similarity. Originally, the website was practically identical to Facebook – same color scheme, similar interface and features. Here you can see the profiles of the creators of the networks in 2006. 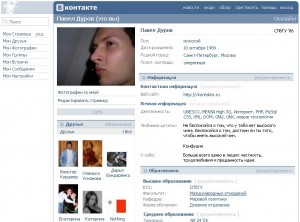 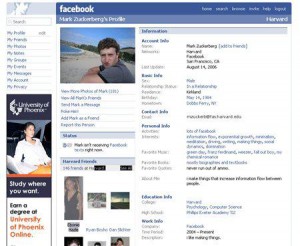 The websites look practically the same. On the left you have the menu and the profile picture. On the right you have personal information, with the emphasis on information on education. Just like Facebook, VK has a “wall”, applications and a like-button.

There are, however, some differences between the two networks. The first difference was present from the start. In VK the user has the ability to upload music and videos. All of the uploaded video and audio files are searchable. This forms one of the core differences between the networks – the pirate content. Vkontakte has had many legal issues over the years due to the piracy. The pirate content may be accountable for the websites initial success. This results in large communities of users who use VK mainly for free music and video’s. Aside from that, VK was very similar to Facebook.

Over the years things changed, especially with Vkontakte. With the constant growth of users, private networks began to expand. When I started using Facebook, friend list consisted of my classmates, friends and people of my age. During later years my friend list started to get filled up with family members, older co-workers, employers, and people who I vaguely knew. This restricted me from sharing my personal content, and my posts became more neutral and less intimate. I feel that my Facebook page has stopped being something personal and had to be edited to be appropriate for a more varied public.

When VK faced the same problem, they gradually shifted the focus from personal to public. The big change came in 2010, when the concept of Vkontakte was re-invented. Instead of the personal page, news feed started to be the home page. Public pages, or publics, started to resemble microblogs on various subjects, starting from dieting and fashion and ending in political parties and fan groups. The fact that Vkontakte allowed for upload of photo’s, video’s and audio’s made way for the new kind of entertainment, generated by the users. Naturally, this is not the case for Facebook, due to its stricter authorship policy, which does not allow for the same pirate haven as Vkontakte does. The repost feature allowed for saving up the favorite posts on your wall, making it a collage of your own interests. So here, instead of actively stimulating the production of the personal information, the network concentrated on stimulating the consumption and generation of the public-oriented information. Gradually, the news feed shifted from the personal updates to the publics posts and reposted content. Vkontakte started to be a mix of a social network and a news aggregator. There are many differences between these two networks, which form their unique experience, but the biggest difference, is the re-conceptualization of Vkontakte network, that shifted the focus from the personal “me”-culture, from sharing the private content, to public-oriented content.

So what can we learn from the example of Vkontakte? Starting out to be a Facebook clone, the social network has evolved into something new, shifting the focus from private to public. Is it going to be the case with Facebook? Or has Facebook already invented a perfect formula for the social networking? Of course, now we can only speculate. In my opinion, to prolong its existence, Facebook has to evolve. It has to find ways to either bring back the private, or to expel it. We will see what the future brings.