Smart phones and Digital Inclusion in the developing world


The Digital Divide is a socio-economic inequality defined by ones access, use or knowledge of Internet and Communications Technology. This can be defined within a country or on a global scale. The later shows that ICT has developed unevenly in the global south (see map). 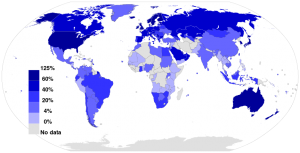 Mobile Broadband Internet Penetration in 2012 as percentage of countries population.

However, wireless broadband internet has surged over the past few years with an increase in connections over the last years, especially in developing countries. Developing countries have largely ‘leap frogged’ over land lines straight to mobile phones. This means that they can keep up with communication development by choosing the best technology for their situation by bypassing the wired stage. A smart phone will, for many people, will be the first and primary internet access point. In addition to connectivity, the smart phones computing powers can be less expensive and easier to maintain than a personal computer. The next leap may be to skip computers and move straight onto smart phones. 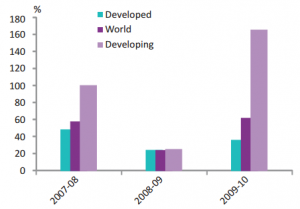 Access
Smart phones are rapidly decreasing in price. For example, the new Intex smart phone, Cloud FX  to be sold for the equivalent of $33 in India or the MTN Steppa being sold in South Africa for about $45. I expect more smart phone designers to be looking into this developing market. Especially if you consider how many young people currently rely on their phones to go online. Evidence shows that more people are using smart phones to access the internet than laptops or computers. In Nigeria, for example, 77% of people over 16 use their mobiles to access internet while only 13% who use computers to go online (ITU, 2011 pg 110). Some even go so far as to suggest that a PC is a barrier to digital inclusion and that smart phones and tablets are better for teaching digital literacy.

Education
Of all the apps downloaded; India, South Africa, Kenya and Nigeria have been using the most educational apps. Because of the fall in the cost of smart phones, tablets, and netbooks this kind of technology is becoming increasingly popular in the educational sector in developing countries. This would give students all over the world the opportunity to learn from up-to-date sources, instead of obsolete textbooks.

Computing
While decreasing in price, smart phone are constantly increasing in computing power while staying user friendly (ITU, 2011b 51). Two app developers have harnessed this power to improve malaria testing. Currently a rapid Malaria tests cost about a dollar, require a blood sample and have a 40% accuracy. This means a lot of money is wasted on medicating people who don’t have Malaria. By harnessing the computing power of a smart phone, two apps have been designed to rapidly test for Malaria while saving money and being more accurate. Born out of a hate for needles, Brian Gitta, a Computer Science student at Makerere University in Kampala, brought together a few students and together created a new way to test for Malaria called Matibabu. With only a smartphone and light sensor. A similar app built by students from UC Davis, called LifeLens, uses the strong camera of a Windows 7 phone, a micro ball lens and some dye to accurately diagnose Malaria.

Social capital
Having more access to the internet via smart phones means that more people from diverse backgrounds can participate in the digital world. By actively participating in mailing lists and Github, David Serenity, an app developer in Uganda could ask questions and share ideas for building apps. Easy Mappr is a great example of a simplified mapping app. With this app you can upload one feature at a time to Open Street Map (a sort of Wikipedia for maps, with data that is open to everyone, but that’s for another blog post). As contributing to OSM can be a complex process in itself, a simplified mapping tool allows more people to contribute to a much needed map, without high-level mappings skills. Because internet and smart phones were available apps like the Easy Mappr and Matibabu could be developed with locally produced knowledge (students from the Makerere University) can participate in a meaningful way by building tools that their country needs independent of app developers from abroad.

Decreasing prices of smartphones, increasing demands there for and benefits of internet connectivity may just be what developing countries need to start bridging the digital divide.