You see it, you report it. Citizen-based journalism


There is no denying that the media revolution has changed irrevocably the nature of journalism. Internet has fostered new forms of interactive and immediate journalism, allowing citizens to actively participate and generate different contents, they can collaborate in covering accidents, natural disasters and often report breaking news more quickly than traditional media reporters. This phenomenon known as citizen journalism has reversed the sender-receiver traditional process. The rise of social media, blogging, tweeter and citizen journalism has forced professional journalists to share the whole media sphere, blurring the identity of journalists and the idea of what journalism is. 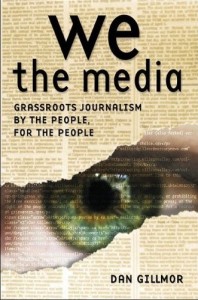 journalism”- is the act of citizens “playing an active role in the process of collecting, reporting, analyzing, and disseminating news and information” according to Bowman and Willis’ report “We Media: How Audiences are Shaping the Future of News and Information”. This term was also addressed as “grassroots journalism” (Gillmor, 2004) by Dan Gillmor, an internationally recognized author and leader in new media and citizen-based journalism. Go ahead and check his book review “We The Media” (2004) in this MOM’s post.

Admittedly, this is a great advantage for journalists because more sources means more information to analyze and spread. But to what extent can they trust the information conveyed by citizen journalists?

Some might say that this type of journalism is unregulated and too subjective, rather amateurish. However, it is unquestionably the key role that plays nowadays. The contents provided by citizens during the London bombings in July 2005, the tsunami in Southeast Asia in 2004, the Hudson River plane crash in 2009, the chemical attack in Syria, as well as the 2013 protests in Turkey are examples that illustrate the power and spontaneity of citizen journalists. The fact is that professional journalists cannot be everywhere at any time, while the audience is an omnipresent actor. In many cases, people are unexpectedly turned into citizen journalists just because they were in the right place, at the right time and with the right tool.

If every citizen can be a reporter, should they be required to be impartial? Keep in mind that journalism is a profession in which training and experience are essential factors beyond possessing the necessary skills. In addition, professional journalists have a specific mindset and a rigorous work ethic well established, unlike citizen journalists, who may not find it easier to comply with the rules of ethics and professional objectivity that traditional journalistic media requires. It’s hard to tell whether citizens should be required or forced to be impartial in order to report something, but we can be sure that, in any case, this type of journalism makes a crucial contribution to the democratization of information. 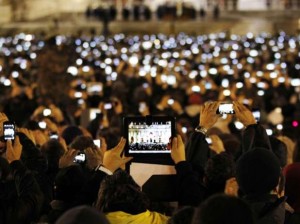 The golden age of journalism?

This process of digitalization of media may be leading us to “the golden age of journalism”, as David Carr from the New York Times stated in 2011:

“We are entering a golden age of journalism. I do think there has been horrible frictional costs, but I think when we look back at what has happened, I look at my backpack that is sitting here, and it contains more journalistic firepower than the entire newsroom that I walked into 30 to 40 years ago. It’s connected to the cloud, I can make digital recordings of everything that I do, I can check in real time if someone is telling me the truth, I have a still camera that takes video that I can upload quickly and seamlessly.”

All in all, we can say that the emerge of citizen journalism involves many advantages, it has proven itself to be a very useful tool in this new era of journalism. However, this new “hybrid media” requires the development of new ethic guidelines for both amateur and professional journalists in order to seek a common ground for their joint efforts. We should not approach the fact that audiences are shaping the future of news and information as ‘professional journalists versus citizen journalists’, but shift towards the idea that collaboration is where the real opportunities lie.

Bowman, S. and Willis, C. “We Media: How Audiences are Shaping the Future of News and Information.” (2003), The Media Center at the American Press Institute.

“We the Media – Grassroots Journalism by the People, for the People” (2004) by Dan Gillmor