Garry Trotter and the Interactive Hallows

About Sameena
A reading maniac, a social media enthusiast, and a chocolate worshipper. Not necessarily in that order! :)

Gray Trotter, Donald Measely and Sermoine Ranger are best friends and study at the RowBards School of Storytelling & Fictionry. 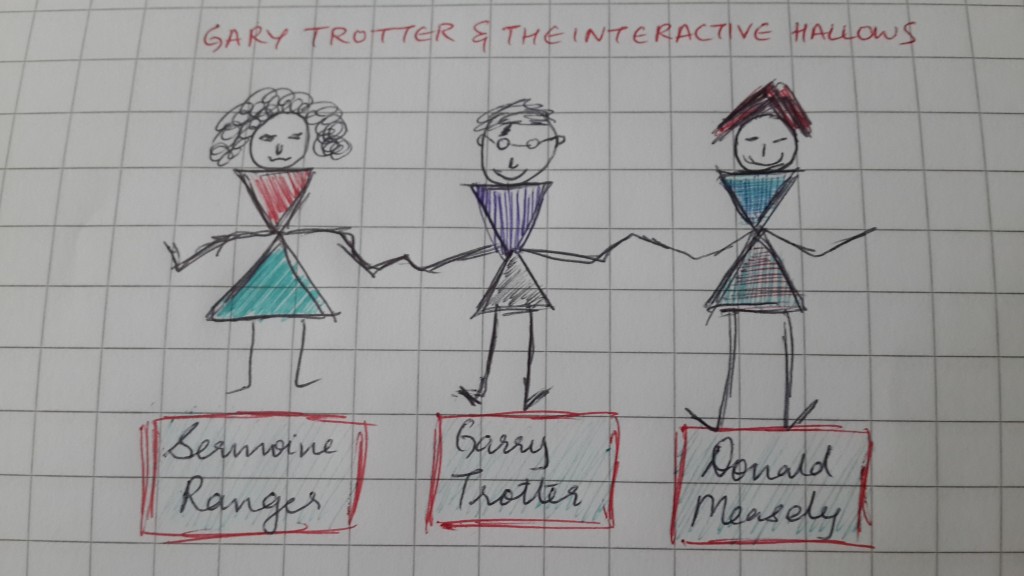 Our story opens on a day, when the 3 of them are travelling to school by the RowBards express. Gary and Don (short for Donald) are busy outdoing each other on the Pottermore.com website. As they are haggling over who has scored the most points for their house, Sermoine looks up from her book…

Sermoine: Am glad you are enjoying that game so much. Seems like the set readings on Interactive Fiction (IF) has had some good effect on you!

Don: Interactive Fiction! What in Merlin’s name is that?!

Sermoine: What is IF!! Honestly Don, I am amazed you have the courage to show up for the lectures without doing the set readings… Gary, tell me you have read it at least??

(Sermoine looked ready to go off the rocker…)

Gary: Hey Sermoine, don’t mind Don…. He’s being his usual self. Please tell us what IF is? Please…

(Both Don and Gary put on a pitiable face, and Sermoine gives in)

Sermoine: All right! Interactive Fiction or IF is a genre of electronic literature. According to Katherine Hayles: “Alternating game play with novelistic components, interactive fictions expand the repertoire of the literary through a variety of techniques, including visual displays, graphics, animations, and clever modifications of traditional literary devices.”

Don: Uh… Sermoine, can you translate that into English?

Sermoine: Uff!! Simply put Don, IF is a form of storytelling on digital media. It involves a variety of digital techniques that mixes with the story to create virtual experiential worlds. For e.g. Pottermore.com – the virtual experience of the Harry Potter books!

Gary: Well.. didn’t know that was Interactive Fiction! Sounds fascinating. With books, the story is imagined according to an individual, but with IF there is less dependency on imagination.

Don: Hey, but isn’t the whole purpose of storytelling, a way to develop good imagination? To be able to visualise stories on paper…

Sermoine: Yes, and IF expands the horizons of your imagination. Just think, how Pottermore has accentuated your perception of the Harry Potter world.

Gary: You have a valid point Sermoine! And am sure Don agrees too… He is more addicted to Pottermore than anyone else! By the way Don, did any of the other players lend you some Polyjuice Potion to move to the next level?

Don (grinning): Oh yes, I have finally managed to get some from a 1st year…

Sermoine: See, this is what I mean by enhanced experience. You not only interact with the story at a personal level but also include fellow players to create a collaborative experience. In fact, in some IFs, users have the freedom to lead the story in the direction they want. The narrative is completely free-flowing.

Don: So are there more works in IF?? Am not aware of them at all!!

Sermoine: Of course Don! There is the work of Emily Short (Savoir Faire), Ion Ingold’s All Roads, Donna Leishman’s The Posession of Christian Shaw etc… As Edward Abbot says in Flatland, “Imagine how, as text leaps from the flat plane of the page to the interactive space of the screen, new possibilities emerge”. So cool!

(Sermoine is about to retort when Gary interrupts)

Gary: But Sermoine, there’s a catch here. If users define the flow of the narrative – then what happens to the original idea of the story? Of what use is a narrator then? The original story just becomes a patchwork of plots by different people.

Sermoine: Well Gary, you are not the first one to ask this question. Janet Murray in her work, Hamlet on the Holodeck: The Future of Narrative in Cyberspace, explains, “Giving the audience access to the raw materials of creation runs the risk of undermining the narrative experience,” but she also concedes that, “calling attention to the process of creation can also enhance the narrative involvement by inviting readers/viewers to imagine themselves in the place of the creator.” So you see, both sides have their pros and cons. More research, innovation and experimentation can help find a balance between the two. In fact narrators are increasingly using contemporary techniques like kinetics, haptic etc… to create new work.

Don: Wow… you are off speaking Latin again. Kaptic, hinetic… what on earth are these? Magical Maladies?

Sermoine: Well, exactly what those are you’ll find out next week when you do the set readings. For now, all I can say is that Interactve Fiction is here to stay, and I think traditional literature is only going to get richer by its presence. Instead of pitching them against each other, I guess we need to look for ways to see how they can complement each other. Oh my! Look, we have arrived at the school! I don’t want to be late for the lecture.

(So saying, Sermoine jumped off the train. Don and Gary followed, trying to keep up with her pace and digesting all the information on IF which seemed like one of the magical hallows to them.)

2. Electronic Literature: What is it? – NK Hayles