“…as a sound with equal intensity at all frequencies within the broadband.” (White Noise Distribution Theory).

But there is another possible reading of white noise. It can be considered in the simplest or the most abstract way. This reading is a public perspective; white noise equals nothing. If we consider ourselves living in an advanced information era where new media structures are already established, than the question is what the traditional media had become. Ernst Wolfgang has written for The South Atlantic Quarterly:

“Media archeology of the present begins right at this juncture, without transition.” (Between Real Time and Memory on Demand: Reflections on/of Television).

That was written in the year 2002 when the transitions of traditional media became an indispensable fact. Transformation from analog to digital television was relatively fast, but radio did not succeed. Radio took some of the new media advances to its cause, but the live broadcast did not transform as expected with Eureka 147, DAB, DAB+ or similar technologies. 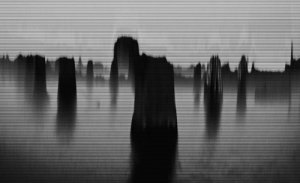 If you turn on your analog radio receiver right now in any city in the world, you will be able to hear the sound of it. The range of radio stations available on the frequency specter defines the sound of the city no different from the city itself. By that I mean the sound of metro or a train, sound of laughing, wind, rain, a bicycle or car traffic. The sound or better said, noise of the city, is also a part of the city culture. This also applies to the frequency range. By turning on the radio and listening to all available sounds, we can define the popular culture of the city.

“…in Germany radio enjoys a widespread popularity, especially among youths and young adults… Radio seems to occupy a significant position in German popular culture.” (More Than a Music Box: Radio Cultures and Communities in a Multi-Media World)

An inevitable fact is that frequency modulated radios will be upgraded. When that happens a whole range of frequencies will be released. Radio covers the frequencies from 88.0 to 108.0 MHz. If we also include the television frequency range, then we get a scale from 76.0 up to 108.0 MHz (Europe and the US). We can reach this spectrum easily with our analog receivers and by doing that we are surfing through the frequency modulated landscape that used to be our societies’ first contact with the direct information system. The leftovers are not simply the thing of the past, they are historically important in the means of culture. 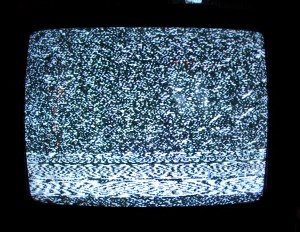 Like deserted cultural centers can become a monument, we can define the white noise frequencies from 76.0 to 108.0 MHz exactly as that. The noise itself can reproduce past media culture and by taking this form it can also be described as a modern culture when put on an exhibition. This kind of media archeology could be considered the sound of glitch art.

Glitch art, however, is fundamentally representational in the concept, since most glitches are direct depictions of (mangled) data. (Glitch art)

To create a randomness with ∞ variance and mean of 0 we would need to make a transmission that would send a blank signal open for any outside sources. By the Shanonn Communication theory, the source of the noise would become the city itself. By means of history and media archeology the transmission would have a historical meaning. With these two meanings combined we would create a white noise monument. So, is it true that white noise is nothing if it can be produced, distributed and consumed?