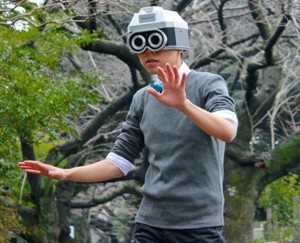 Touchy is an artwork designed by Eric Siu  in 2012. It has won several awards such as the Best Picture at the Robot Film Festival, New York, in 2012, First Prize at the 15th International Media Art Biennale, Poland, in 2013 and the Silver Award, Interactive Design, Best Digital Entertainment Award at The Hong Kong ICT Awards in 2014. This year it was also selected as Best-of Ars Electronica Festival. It was also covered in various media such as WIRED UK, Neural, Discovery News, Huffington Post, Washington Post.

Touchy is an interactive device that enables a human to transform into a functioning camera. The working principle is that while wearing the helmet-like camera, the wearer is completely blind until he or she is touched by another person. When this interaction occurs, the eye-holes functioning as shutters of the camera open and the wearer is able to see through the holes. If this physical contact is held for 10 seconds, the camera takes a picture that is displayed immediately on the LCD screen at the back of the device. 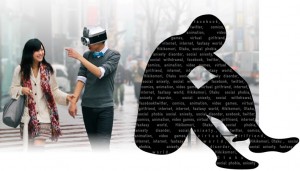 According to Eric Siu, this project is ‘a phenomenological social interaction experiment aiming at healing social anxiety’ which is nowadays produced by the different social networking sites. The ubiquity of social media networks like Facebook and Twitter can be criticized that by forming virtual social spaces, they are neglecting the physical social interactions and are “dehumanizing physical communication”. Touchy is trying to be the opposite of social medial platforms as Facebook, by focusing only on human physical interaction. Touchy is also inverting the process of ‘selfies’, as the human camera is able to make pictures of other people but not of himself or herself. Siu also posed the question: “Isn’t it a lyrical irony that gazing into another’s eyes for 10 seconds gives life to your self-portrait?”. Photographs have always had a central role both in a social media network as in a physical space. According to Siu, the camera was improving our social lives because it enabled people to share memories, valuable moments or emotions.

With this kind of interaction, Touchy is trying to heal the society that is becoming increasingly isolated because of technology: “Touchy is a result of rethinking our relationship with technology, and the joy that can come via offline communication.”  Siu also stated that: “The project does not aim at making photography more social, but human. That is to say, employing the social capability of a camera to a human being” 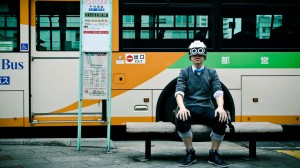 It is interesting how a device that transforms a human being into a machine might heal a society that is overtaken by technology. The core of this device is the human touch, which is showing how important senses can be for human relationships. This device allows embodiment instead of disembodiment.

The importance of the human senses in a digitized society brings me back to the early beginnings of cybernetics. When I say cybernetics my mind goes straight to the image of a human wearing a helmet, walking on the street and being completely disconnected from the physical space. 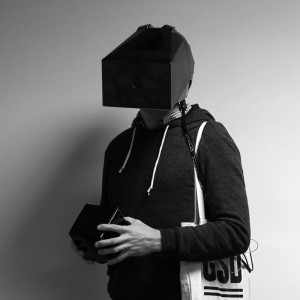 With a personalized virtuality displayed by the helmet, a human could live as isolated as possible, but still being in contact with everything and everybody. These kind of thoughts can be found in the early stages of cybernetics and to an extent they can apply for our everyday society. It is very common to us to see people constantly interacting on their smart-phones. They are not wearing a helmet, but a telephone can also make someone’s view of the physical space quite narrow.

When trying to make cybernetics an universal science and language, prominent cyberneticians where arguing that: “with this new language they were breaking down the false dichotomies between mind and matter, human and non-human – dichotomies that the new information-based language would show never to have been true”(Bowker, p. 117). It can be interesting to analyse to what extent the humans will further merge with technology and also to what extent humans can become disembodied from the real, physical space.  Could a device as Touchy become a new way of socializing for future ‘Facebook addicts’? Or would Facebook become the norm for socializing and the disembodiment-embodiment dichotomy will disappear?