Eyeware devices have been around for some time with gadgets like Google Glass or BT-200; what they do is to enhance reality by projecting images into our field of vision and this can be films, videogames or the screen of a smartphone so you can access your social media, take photos and video, and so on without the need of taking out your phone.  Innovega is taking this technology a step further with  it’s system iOptik which is based on the use of contact lenses.

The contact lenses still need to be used in combination with a pair of glasses that have small projectors, “…utilizing the specialized lenses to help users focus on both close and faraway objects — an issue when putting panoramic images inches from the eyes — in conjunction with the glasses to project the media and overlays, Innovega is able to do two things when most wearables do just one” explains Nick Statt in his the review published on CNET. Other advantages are the transparent glasses which allow peripheral vision and perception of others; also the lenses can have a prescription so that persons with visual problems can use them all the time, and they deliver a HD/3D big screen projection. Innovega’s slogan is “The future of personal media…” and they are getting personal indeed; even if all the benefits might seem appealing, it is important to keep in mind that is a device that is physically inserted onto your body intended to be worn all the time, which is why even though the system was presented at CES 2012, it has not been released to the public, and there is no definite date for release because it  needs to be approved by the Food and Drugs Administration in the United States, which the company will apply for at the end of this year or beginning of 2015.

Innovega is only developing the technology and they will then sell it to other companies for them to build the apps and so it will be them who decide the future uses of the device. As any scientific discovery, it can be use to impro 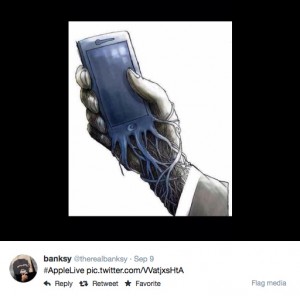 ve the quality of life or to abuse of power, which will enhance the privacy issues already discussed when the Google Glass came out;  and some other academic discussions. The tendency of technology taking over our lives has been of great concern, but now they are starting to take over our bodies as well, not only iOptik but also the Apple Watch and other devices that you can further explore on the current issue of Time Magazine. The post-human debate in academy focuses on the ever vanishing division between body and technology, topic that has also been approached by artists like Stelarc who’s work study the obsoleteness of the human body and Banksy who posted a sketch during the iPhone 6 presentation.

It will also have an impact in the way we understand and relate to images. Thanks to the multiplication of images we live trough images creating a hipper real reality that no longer relates to the original was extensively analyzed by sociologist Jean Baudrillard in 1981 on his book Simulacra and Simulation and this was before all these technologies. Now, with the digital cameras and the use of smartphones we changed our physical, ergonomical relationship with a photographic camera and this has impacted what we consider worthy of capturing which has arise a big debate within photography and image theorists known as the democratization of photography.  With eyeware devices we will no longer have to take out another object to snap the photo but we can capture what we are looking just by a voice command or even a wink and it will enhance the quantity of images that we create and share giving a new dimension to the already existing debate. In this post I mentioned just a few of the issues that we’ll need to keep in mind while we enjoy this fascinating new technology hoping that It will arise some more questions in the reader.