“Create new, contextually rich mobile experiences.” That is what Estimote promises with their products. They’ve recently introduced their new Estimote Stickers, which should “represent the future of what sensor technology and contextual computing will be.” They call these stickers Nearables. Small wireless sensors that you can attach to any location or object. By doing so, they broadcast tiny radio signals which your smartphone can receive and interpret, unlocking micro-location and contextual awareness. The stickers were covered in all of the major technology blogs, like Engadget, TechCrunch, Gigaom, GeekWire and The Next Web on their basic technical capacities. But what more does this kind of technology mean? Let’s look at the introduction video first:

Let us first look at the definition and history of a beacon. Wikipedia states: “A beacon is an intentionally conspicuous device designed to attract attention to a specific location.” Before, beacons were mostly used to help guide vehicles like airplanes and ships or alert over land that enemy troops were approaching. In the movie The Lord of the Rings, beacons in the form of fire on top of mountains were used to send signals to the other realm once enemies approached.

When translating this scene to the process of Nearables, you could say that this time signals between the realms of ‘the digital and physical world’ are being exchanged to communicate with each other. When entering a space with Nearables, digital communication between object and person is enabled. The most notable difference is that these beacons are now invisible and digital, rather than the purposely visible and physical ones in the clip. Also, the communication works back and forth, enabling full interaction with each other.

The interacting between the physical and digital is an often discussed topic in the digital age, also been related to as ‘actor-network theory’ (Latour 2005) and ‘the internet of things’(Ashton 2009). Nearables enable physical objects to enter the digital realm and thereby interact with others in there. This interaction has been discussed for both its potentials as well as its possible threats. The major threat concerns issues around privacy (Weber 2010). For these Nearables too, especially the invisible and unknowingly access to personal information through physical objects can be considered very problematic and could prevent it from being adapted and succesfull. 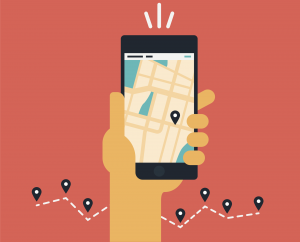 Especially in the field of retail and marketing, there are lots of possibilities. By processing personal information of the user, physical spaces can approach people in a highly personalized way that was before only possible on the internet. Customers of physical stores now can get personalized promotions too, based on their location inside that store or on personal preferences which are retrieved from their online profile. This would, however, require the user to share his location and digital data, which forces him to deposit valuable data first, in order to make use of this technology. This form of exchange is already a common practice on the internet, but could now thus get introduced in the physical world as well. Also, online stores have had the advantage over physical ones by their digital analytical tools, like website heat-mapping and page visits, which enables them to gather valuable data and re-use it for marketing strategies. With Nearables, physical stores can now too make use of such tools. For example, knowing which areas of the store are most visited, which products have been picked up and by whom (see example in introduction video). This introduces both ambitious possibilities for a store’s CRM and analytics, but also raises many questions and issues around the topic of privacy. (Agre 1994) 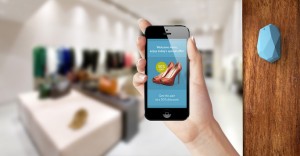 Conclusion
The new Estimote Nearables are pushing the beacon technology to new heights with both its technical capacities and ambitious developers community. Physical stores can now do what online stores already do for a long time: create, retrieve and interpret digital (user)data. Data that is valuable and, in today’s society, also much easier accessible than before thanks to the massive use of social media and web 2.0 in general. On the other hand, this massive, invisible and unknowingly exchange of digital data that is used for commercial practices is already very common in online spaces and too often accepted and taken for granted. Nearables could therefore, unintentionally, also be seen as a critique on the habit of giving away personal information too easy in digital spaces. Moreover, there has been much discussion and unsolved questions about how to regulate digital spaces. With the adaption of technologies like Nearables and physical spaces making now also use of digital data, a rethinking about the regulation of this ‘physical space 2.0’ might be taken into consideration as well.